My Brother is Engaged!

On Saturday, June 16th, my little brother, Mac, proposed to his girlfriend, Julie!  He sent her on a scavenger hunt around D.C. leading her to several significant areas of the city that have been meaningful to their relationship and left her little gifts along the way.  The final spot where he met her was at their church, Falls Church, where he showed his love to Julie by washing her feet for her like Jesus did for His disciples in John 13.  And there he proposed!  And she said, "yes!"  I can just imagine the excitement and anticipation Julie felt as she wandered the city, wondering what was next and when she was finally going to meet her beloved.

Matt and I have known of this upcoming engagement for the past several weeks, and it was like sitting on pins and needles waiting for the phone call to tell us it was official.  We were able to see Mac and Julie at Matt's sister's wedding on June 10th, and I was so afraid of introducing them the wrong way.  My brother would have killed me if I slipped and accidentally said, "And this is Julie, his fiance!"  Fortunately, I did not blow it.  So on June 16th, as Matt and I were driving into Charleston, we received the call from Mackie detailing the day's events.  Julie is a precious young woman who brings much joy to my brother, to our family!  We eagerly await the day to celebrate when they become husband and wife!  Congratulations, Mac & Julie!! 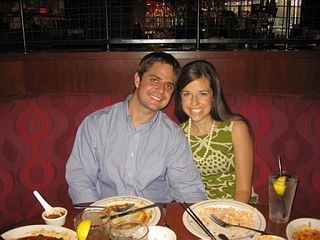