A 'Ittle Bit o' Everything

For the past few days, I feel as though I've lost my "umph" writing for the blog.  It's as if I have a lot to write, many ideas I want to write about, but the creativity, the mental energy, and the words to capture my thoughts "just so" have seemingly dwindled.  Quite a predicament to be in for a blogger!

Matt and I are having a most relaxing and wonderful Memorial Day weekend, my last got-nothin'-planned weekend for the next 4 weekends, which will be full of traveling hither there and everywhere.  Next weekend, my brother and I are visiting my grandmother, Gaga, and it will be the first time I've been on a plane since my fall world travels.  The travel bug has come and grabbed me yet again...something in me that is likely never to recede.  I'm greatly looking forward to time with my Gaga as well as my "'ittle broder"..

First, my heart goes out deeply to Steven Curtis Chapman's family, which I'm sure most of you know about the unimaginable tragedy that they are walking through.  As you pray for this family in their grief, I humbly ask you to pray once more for my friend, Tom, as he not only continues to daily grieve the loss of his wife, Becca, also my dear college friend/roommate, but he daily battles excruciating, unbearable pain that put him once again in critical, but stable, condition in the hospital just this past month.  For those new to the blog, you can read more about his and Bec's story here.

The memories of helping Becca prepare to walk down the aisle; of the laughter of us bridesmaids echoing in the limousine heading to the church;  of watching our first college girlfriend stand before her groom and the Lord Jesus making vows to love, honor and cherish; of getting goosebumps and teary-eyed watching Becca and her daddy dance to "Butterfly Kisses" at the reception are as vivid in my mind today as they were seven years ago.  But this year, I don't get to send them an e-card wishing them a "Happy Anniversary".  This year, us college girlfriends won't get an email from Becca saying that she and Tom just finished watching their wedding video and reminisced about their special day they gladly shared with us. 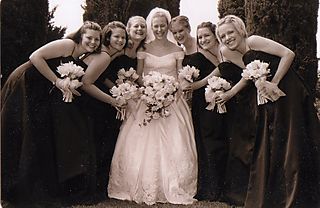 This year, instead, Tom is reeling in pain keeping him from walking, awaiting several major surgeries, feeling discouraged because of setbacks, and walking through much heartache.  Not only will tomorrow have been his wedding anniversary, but in less than a month, he will also face the one year anniversary of Becca's and the three youth kids' deaths.  So as you pray for the Chapman family, I'd be ever grateful if you also prayed for Tom and his little girl, McKayla, as they walk through a difficult month, and what is still a long road to recovery.  In Tom's dad's blog updates, these were their prayer requests as of May 11th:


Lastly, I am currently reading John Adams by David McCullough, who tells a masterful biography of a man, John Adams, who rose to his place in history as a zealous patriot during the American Revolution and the second President of the United States.  I am humbly amazed at the revolutionaries, who gave of their whole lives (time, energy, families, and yes, literally their own lives) to fight for a cause in which they dearly believed.  I'm afraid the cautious, non-risk taker in me, would have high-tailed it back to Britain to be a loyal subject to King George III.  Yet Adams, along with the other Founding Fathers, stood their ground, remained steadfast to their convictions, and led the way for us in present generations to enjoy the freedoms of "life, liberty and the pursuit of happiness".   As I reflect on this book, and tomorrow's Memorial Day commemorations, I cannot help but be thankful.  It seems so trite to simply write that, but I am.  I know Memorial Day was first enacted to honor Union soldiers during the Civil War and since then, all servicemen and women who lost their lives in military action, but in reading John Adams, I will go so far as to thank all those men and women during the Revolutionary period as well, who set the precedence for this country's values of freedom and liberty.  To those who have served and to those currently serving, thank you.  To those who lost their lives in past and current generations serving our country, you are not forgotten...thank you!