I'm Lovin' Me Some Coupons

After a wacky week of weather vacillating from the high 30s to record highs in the 80s, Austin is finally settling back into our normal 60-degree weather today.  The only pro I've been able to come up with for the 80 degree temperatures is that my use of flip flops on a December day isn't questionable.  My ogress-sized feet welcome not being shoved into a closed-toe shoe at the moment.

Right now I'm watchin' me a good ol' game of pro football, soaking up every minute of it before we transition out of football season.  And, I'm adjusting to the noises of the new washing machine we just bought.  I'm a little freaked out, I must say.  Not only am I scared that the washing machine is going to flood our house again, I'm not used to these unfamiliar cycle noises.  I might add, neither is Molly.  She crept gingerly into the laundry room rather skittish-like staring at the machine.  Precious girl, I think she senses my own hesitation.

Apparently, our old washing machine that caused the havoc last weekend was a dud from the moment we bought it.  Both the service repairman and the delivery fellas who dropped off the new one today have said that Maytag's reputation isn't the same as it used to be and I quote their response to seeing the old washer, "Oh, yeah, this is the bad kind."  I've never been so glad to see a washer hauled away, albeit it was only four years old.  No sentimental value there, thank you very much.  There were a lot of things that contributed to the house flooding that dreadful hour last Saturday, not just the washing machine.  But nevertheless, after hearing all that was wrong with the washer, I say, "Good riddance!"  By the way, thank you so much for all of your kind words of encouragement and your prayers!  I received a number of comments and emails that were very uplifting.  Thank you so much!

Ok, so I just had to share something really fun with you that Matt got for Christmas from my folks.  Everyone loves coupons, right?  Well, these coupons are priceless.  Seriously.  I'm wondering why he got them and I didn't.  I'm a tad envious.  I think at least two sets of these coupons would be appropriate.  But he's the one who received them and thus, he's the one who gets to decide when they get cashed in.  I think these particular coupons will now be a regular gift preference of ours.  They reside on our refrigerator, ready to be used at any time and not far from our minds.

Matt was given a coupon book from Pops and ______ (a grandma name yet to be determined for my momma) that has a variety of coupons Matt can turn in for things like babysitting for a night to go to the movies, a walk around the neighborhood with Molly, holding and walking Polka to sleep, or singing a lullaby.  Like I said, these are priceless!  Fortunately, on the cover of the coupon book, it's written, "More where these came from", so there's hope for more.  I can see these coupons going fast! 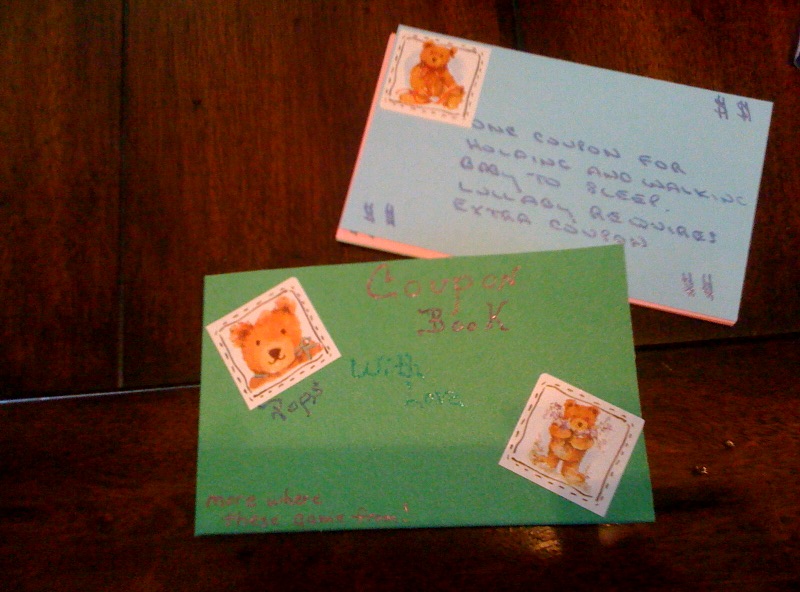 We're only looking at twelve more days to go until our due date, Internet peeps!  When someone at church today asked us how much longer and I replied, "Twelve days", you should have seen the look of bewilderment and shock on Matt's face!  No joke!  It really took him aback; for some reason he kept thinking we still had around twenty days left.  Oh, bless his heart!  I think another gray hair popped out on his head at that very moment.  At least he has those coupons to fall back on to lift his spirits and slow down those sprouting gray hairs!

Excellent present.
Coupons are a great present that my hubs and I have given each other from time to time. I do hope that you are enjoying the time that you have before the baby comes. We did not do enough that people told us to, because there wasn't so much energy. But seriously? Dinners at restaurants with cloth on the tables! Movies! (at the movie theater). Hanging with friends. Doing something silly and decadent like sleeping in and having a leisurely breakfast in bed. (I know, you probably aren't sleeping any better than I am, but somehow, it is best right around sunrise, which is currently when the toddler likes to wake up...argh...)

Go to a concert.

You will miss those things in just a few weeks.

Oh, and weirdly, as I mentioned in my last post, I have become very calm about this whole labor and delivery process. Lots of prayers answered, I think.

That's a great idea! I love getting babysitting nights as gifts! Merry Christmas!

Thanks for continuing to write during this crazy time:)

Those coupons are great!

That is so sweet!

Okay, it looks like you are still pregnant! I was afraid I'd get back and have missed the big day! How are you feeling?

This is soooooo exciting!

I love those kind of gifts! They are the best! :) Very thoughtful!!!

I prefer to call them "wisdom hairs". The more the better! :)