Last Monday was a cold, wintry day in Austin.  It was a perfect day to be bundled up in a sweatshirt, scarf and bulky coat.  And definitely, a hat was needed.  It was an ideal day to use the weather as an excuse to dress up incognito if you were, say, a celebrity.

At 8:15 a.m., Matt and I walked rather subdued into my OBGYN's office last Monday for our 37 week appointment.  Being that it was two days after our house catastrophe, I was rather melancholy and on the verge of tears, ready to burst at any moment.  The doctor's office was rather quiet, quite the opposite of its normal bustle.  We found two seats in the middle of the office and an odd character sitting in the corner reading a newspaper caught my eye.  He was sitting by himself, wearing a coat and a baseball cap.  I did a double take because the chiseled face looked quite familiar.

Could it be?  Seriously?  That guy looks an awful lot like Lance Armstrong.

I told Matt, who took a peak and he thought it very well could be.  He pondered the idea of taking a picture with his phone, but I discouraged it, envisioning us being thrown out of the doctor's office.  It's the worry-wart, dramatic side of me showing.

But what would Lance Armstrong be doing at my OBGYN's office?  And why would he be sitting in a waiting room by himself?  If he's here with a girl, why isn't he with her?  Or maybe he came with a friend?  He doesn't have a new girlfriend already, does he?  Is he here with his ex-wife?

It was a site very out of place and quite peculiar, so much so it made me wonder if it really was Mr. Tour de France himself.  I kept staring, 90% sure it was him.  A few minutes later, a young looking woman, whom I did not recognize, emerged from the doctor's area.  Walking over to the possible celebrity, the woman whispered something in his ear and they spoke for a few minutes; he folded up the newspaper; and they walked in front of us exiting the office.

Oh, it's just gotta be him.

But what he was doing there was quite puzzling.  There were no more than 10 of us in the waiting room at the time, and no one else seemed to be staring at him the way I was.  Most of them were playing on their i-Phones.  We joked about calling some celebrity gossip line to let them know what was going on.  But no, that wouldn't be right, and we weren't entirely sure it was him.  And why on earth would he be at my OBGYN's office, let alone sitting in the waiting room by himself!?  Goodness knows I had a lot more on my mind than focusing on Lance Armstrong and his personal life.

But how CRAZY it was to venture to People.com two days later and catch this!  I mean, really!?  We couldn't believe we'd been witness to such celebrity-breaking news!  It's just too wild.  Did he really plan on revealing the news that quickly or did it somehow leak from the doctor's office?  Kinda crazy!

Real quick, we had another doctor's appointment yesterday and nothin' is happenin'!  And there were no sightings of Lance or Anna.  We're 10 days away from our due date, and so far, Polka is exhibiting signs of a very content baby who does not want to make his/her appearance into this world quite yet.  So maybe, just maybe, our home will no longer be the mess that it is by the time Polka comes home.  And with our carpenter here this week, our house really is a MESS! 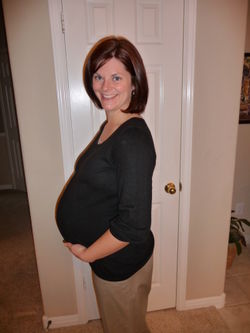 You are among the ranks of the "cute pregnant ladies." Officially. :-)

woooo! that baby sure is comfy in there! You look so cute!!! :D

I know what you mean about the baby not coming. I have decided that mine has settled into a "long winter's nap" and is officially never going to be born.

My latest (longest) due date is tomorrow.

And NOTHING is happening.

But you don't look tooo uncomfortable yet!

Come on Polka...I guessed you would arrive in time for a tax deduction :) You know your Momma loves finances so why not make your appearance tonight? We look forward to meeting you soon either way!

Wow that is so crazy about the Lance thing - how cool is that?!? And you are an adorable pregnant lady! Can't wait until Polka comes, although you won't have much time to post for awhile when she/he comes!

That's really pretty cool. I didn't realize you live in Austin. Two of our really good friends live in Gruene which is my favorite town, so we get down there every chance we get. I'm not an Austin fan, though, and Jory graduate from A&M, so we veer away from there. He does go every other year to see the A&M-Texas game on Thanksgiving, though, so he was just there!

Come join our New Years "party" . That photo of you is awesome! :) Happy New Year :)

i can't get over the Lance story. I've been asking all my friends if they even knew he was dating someone! what in the world? PS would this kid have been in vitro? i need someone to give me more scoop.

Meg, you have had quite the year with celebrity sightings! What a blog-worthy story :) You look so very cute--I guess Polka is going to be a 2009 baby!!

I love the Lance story...how crazy! Your pregnancy picture is so cute.

I just found your blog via Kellys Korner.....you look adorable pregnant....no one should look so good! HA Ha But truly you do look great!
...good luck....
Warm Regards from of a mom of 4 ( 2 boys, 2 girls)
Oh, I loved your Lance story...doesn't it drive you crazy when you see a celebrity...you want to yell..really a strange sensation.......odd that he didn't go in with her though...why come all that way to the office and not go in......?