Home Archives Profile Subscribe
If Labor was a Salsa, Mine Would Be Mild
To Tide You Over

Hey, dear Internet peeps!  I hope this finds you doing well on this Monday afternoon.  How was your weekend?  Ours was muy fabuloso given that we had some very special visitors, ate lots of yummy food, laughed a lot, and it was simply the weekend!  Weekends are now so much more valuable to me; and sadly, they go by at warp speed.

I am going to post pictures of this weekend with Brennan's Uncle Mac and Aunt Julie a little later.  I have some pics, but Mac and Julie took some awesome pictures with their camera and I'm waiting to get copies of those first so I can post them together.  In the meantime, I wanted to let you know of a fun project that Brennan and I did last week together, thanks to his Aunt Melissa who gave it to us as a gift.  For those of you with little kids or in need of a great baby shower gift idea, here it is:  the Deluxe Baby Keepsake Frame.  You can order it online here at Red Envelope.  The frame allows you to capture either handprints, footprints (or both), and a favorite 4x6 photo.

I wanted to get a molding of Brennan's hand and foot prints early on while he's still teeny tiny.  So last Monday,  we worked on it together during his few awake hours.  <grin>  It took several attempts, but eventually it was successful.  His handprint was the hardest to press into the mold because he loves to keep his hands by his face and usually, he's tight fisted.  For the picture, I used the one of him in his coming home outfit, but I think there might be a favorite picture of ours that Mac and Julie took that we'll switch out.

Speaking of "projects" or games, I know he's just 3 weeks, but what fun things do you all do or know of to do with little ones (of ANY age) during awake times?  I'd love to hear some fresh ideas! 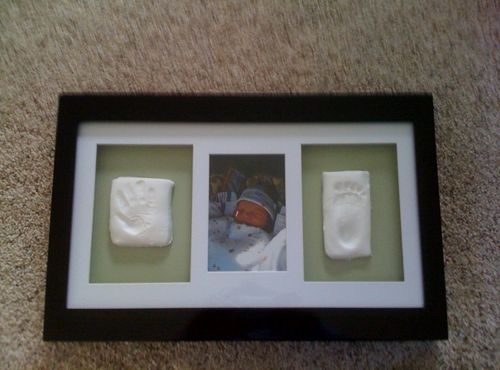 On a Spicy Magnolia blog note, I have an exciting new feature to offer ya'll!  For those of you who don't use something like Google Reader--that just might be total mumbo jumbo to you--or for those of you who get tired of hitting the refresh button to see if I've posted something new, you now have the option to subscribe to Spicy Magnolia via email.  Whenever I post something new, you'll get an email notification that there is a new post!  It's a pretty cool new feature, if I don't say so myself.  On the left sidebar, scroll down and you'll see a place to enter your email address and submit it for a subscription.

Stay tuned for pics and more...

I love that set from Red Envelope! I did one of each of my kids for each set of grandparents. Yours is beautiful. As far as activities when they are that little...a lot of cuddling and floor time mostly - everything is new to them so you can show them just about anything (baby safe) to look at and touch. They love to look at ceiling fans too!

What an adorable frame! Little hand and footprints are irresistable. :-)

One game tiny ones like to play is peekaboo. They don't "get it" at this point, but it's novel and fun. Also, gently moving his little arms to play "pat-a-cake" or to do "motions" to silly little songs are usually fun.

And...can't emphasize enough - they're NEVER too young to be read to. Ever. Get books with photos, textures, or bright colors, and just read to him. As he begins to have some semblance of control over those tiny, tight-fisted limbs, he'll begin to reach for them.

One of their all-time favorites at this age, though, is to stare at your face. Newborns can't get enough of your face, your voice, your warmth. Hold Brennen on your lap, close enough to focus on your face, and just babble to that little boy!

You're probably doing all of that already though. :-)

I love the little prints! So cute!
I had a hard time knowing what to do with Parker when he was brand new. My friend suggested getting these idea cards from Amazon: http://www.amazon.com/Bright-Beyond-Baby-Pal-Toys/dp/0972617043/ref=pd_bbs_1?ie=UTF8&s=books&qid=1234219021&sr=8-1
They are simple activities and helped me know especially what was age appropriate. My friend purchased the toddler cards and thought they were great too.
Has anyone out there tried the Gymboree Baby Play book or Toddler Play book? I was wondering if they were any good.
In these days of the "Back to Sleep" campaign, I always suggest lots of tummy time since my dude is a little flat headed. The earlier they learn to enjoy it, the better off they'll be. I love the IKEA Leka play mat. It is bright and cheery with lots of things to look at and play with during tummy time. It is inexpensive and has a rubbery back that doesn't slip on hardwood floors like a blanket would.
I also ditto the comment about reading. They love to listen no matter what it is you are reading.

Oh so precious those little hands and feet. What a special treasure to hold on to that will be neat to look on later and show Brennan just how small he was. One thing I remember that was fun doing with Jadon was showing him in the mirror and watching him try to touch the little person he sees on the other side. Everything is fascinating and new to them. It's fun showing them things they have never heard before.

That is absolutely ADORABLE!!! What a great keepsake :o)

last night we had friends over, and tonight yoga. tomorrow class, Thurs out to dinner and Friday out of town till Monday. But I will try to do the pictures soon, hahaha And I do agree that one of him with the dark background would look really good in that frame!

So sweet! Wonderful keepsake too!