Gettin' It In Gear

If you read the post from last Friday, or at least viewed the video, you have a good idea of what we did this weekend:  watched some good ol' American basketball!  The yard work didn't happen since it ended up being pretty cool on Saturday.  But we caught a few good games.  Surprisingly, flipping the coin for my sister-in-law's bracket didn't hurt us much at all.  We're tied for 7th place out of 30.  And as far as BooMama's bracket I participated in, well, I used my good ol' noggin for that one and it ain't worth even mentioning what I'm ranked it's so pathetic.

Look what I got in the mail yesterday from Lands' End (forgive me, I'm no photographer but so wanna be): 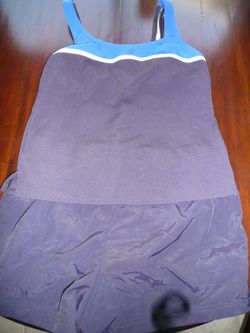 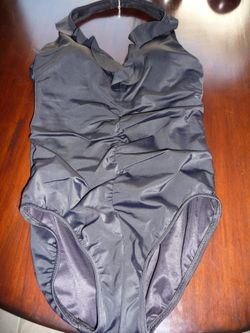 These pictures certainly don't do them justice, so if you'd rather see them on a professional model, you can click here for the solid ruffle tank and here for the original sport tankini.

I know I'm crazy thinking about swimsuits already, but I want to have one on hand and ready for whenever we take Brennan swimming for the first time.  I mustered enough courage to actually try them on this morning, surprisingly.  While having lost all but three pounds of the baby weight I'd gained, I've survived (unhealthily, I know) on chocolate milk, mint chocolate chip ice cream, and chocolate chip cookie dough to give me a bit of a boost during the day.  It's a pick-me-up and a substitute for coffee.  But,  I.  Must.  Stop.  It.  My body has taken on a whole new shape since being pregnant and the pick-me-ups are adding to the problem!  Maybe I should leave these swimsuits out on the kitchen table as a constant reminder to avoid partaking in those wonderful things that ultimately will lead to my demise, literally and "figure"-atively.  ha ha!

The solid ruffle tank is a great swimsuit:  very flattering and pretty.  I think I would keep it except for the fact that I'm dealing with some major changes to my body figure, particularly the upper parts of my body, if you get my drift.  I've never worn a tankini for a bathing suit, but it was quite comfortable; I didn't want to take it off.  And seeing as how I'll be trying to keep up with an exploring little boy while wearing a bathing suit, I should probably go with the one that offers more coverage when I bend over.  Or maybe hubby will let me keep both of them if he dangles a little hubby/wife getaway to the beach my way???

So yep, Internet peeps, as far as feeling good in a bathing suit goes, I gotta get in in gear!  I guess my title is a bit misleading:  I haven't "gotten" it in gear quite yet...I'm working up the motivation to make it an action verb.  I bought this before Brennan came along and I finally drug it out of the closet last week: 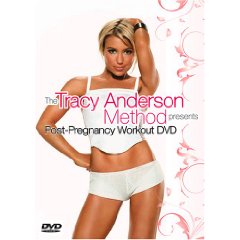 Oh, it's out of the closet, but not out of its wrapper, mind you.  I heard it was good.  Dadgummit, it's gotta be good.  Just look at the girl on the cover!  Why do they do that?  Is it supposed to be motivational?  They should have in big bold letters across the top, "RESULTS NOT TYPICAL" to alleviate any frustration or depression over not looking like this gal after months of sweatin' it out.

I'm thinking I should not do it in front of Brennan, at least for the first few weeks until I get to the point where I don't look like a complete exercise-phobic, worn-out momma who can't catch her breath.  Mark it now:  it would be the first time ever he'd be embarrassed by his momma!  Then when I look like the gal in the picture, or at least 15% somewhat, I'll bring him out and show him what his momma can do.  All other areas of my life he can see my fallibility blatantly on a daily basis, so why subject him to one more area when I can improve upon it a bit before he witnesses it?  <grin>

Ok, just gotta share one more thing that's on my brain.  Tomorrow is the month of April.  Tomorrow marks the first day of the month in which I turn 30 years old.  I'm not really all that bothered about turning 30; hubby preceded the way for me and that's all that matters.  ha ha!  But I've been thinking a lot about it.  So much so, I recently bought wrinkle treatment and Olay's Pro-X Restoration Eye Complex.  (By the way, cool rebate plan for Olay Professional products here.)  I've heard it too many times recently that it's never too early to start with the face products.  With hearing about it as many times as I have in recent days, I'd be a foolish gal to neglect such advice.  <grin>

Call me crazy, but I think turning 30 has gotta be a dang good reason to start gettin' it in gear, Internet peeps!  Brennan is sleeping right now, so you'd think I'd get off the computer and pop in the workout video.  Maybe I'll just unwrap it.  That's a step.

This post made me laugh - you are so cute! I am sure that you will look great it whichever one you choose! Give yourself some time to get in gear, it's only been a couple of months. Oh - and I turn 30 in April as well - the 27th!!

I'd say you're doing great even looking and ordering a bathing suit 10 weeks after having a new little one!!! You're just as cute as you were 30 years ago...They've been the best 30 years of my life!

Props to you! I can't even IMAGINE shopping for a suit right now! Can I wear sweats in the pool?

You are funny! I like this post :) Cute swimsuits. We took Guy swimming last week for the first time and I wore one of my old suits. I had the problem up top that you mentioned. Definitely time for something more bending-over, running around worthy. And happy early birthday! Yay for 30!

Hey Meg!!! So I am in between email addresses (which is annoying) but I know I could get in touch with you through your blog. BTW totally get the 30 thing--I am loving Olay Regenerist Daily Thermal Mini-Peel. So once I am more settled in St. Louis, will email you (hopefully from a new email address!). XOXO!