Me and My Prince

After looking back at pictures of my pregnancy and Brennan's first two months, this momma is sentimental.  This momma is reflective.  This momma is reminiscent.  This momma is head over heels for a little boy.  The more and more I bond with and get to know the little fella, the more I'm taken by him.  He sure is a doll-face, except for when he's being burped and thinks he's not getting any more food.  Oh, ya'll, I tell ya:  it's just the end of the world for that little boy!  Before we get on a plane to go to Virginia in June, I seriously hope he's phased out of it or we're gonna be kicked off that plane so fast.  And well, I've already had my fair share of stare-downs from people who weren't happy me and Brennan were selected to sit by their table in a restaurant, for how dare I bring a baby there!  The stare-downs were just from coming their direction.  Good grief!  Can I, therefore, be seated on the wing of the plane, away from everybody?  The view is much better out there anyway.

For awhile now, I've wanted to take Brennan on a special "mommy-son" date back to The Steeping Room.  Albeit a tea room, it's the place I went when I was pregnant with the boy, hoping to take some time to bond with him during all the ups and downs of being with child.  And remember, I didn't know he was a boy back then.

So last Thursday, he and I got dressed up, smellin' all good and fresh (at least for 10 minutes or so).

If he stayed awake, I'd talk to him throughout lunch; if he fell asleep, I planned on working on the book, Love Letters to My Baby, the book I found that same day I went to The Steeping Room and started writing in last June.

We were pleasantly seated inside by the hostess, (we only got a few looks from other patrons which made me feel a bit uncomfortable, but I could very well just be over-sensitive about the matter ), and I sat him in his car seat next to me.  He was the most jovial fella, trying so hard to stay awake for his momma because he knew we were on a special date (at least that's what I like to think).  I talked his ear off and I'm not lying, every sentence I uttered brought forth a beaming smile.  His gaze was fixed on me.  My heart:  melted like milk chocolate in my mouth.  He was such a gentleman!

Confession:  I still get really nervous taking him out.  He's a good baby but if he gets tired and isn't quite comfy in his car seat, then he gets a little fussy.  I can't seem to fully enjoy the moment because I'm leery of the possible fussiness and always thinking about how to handle the situation.  I have to constantly tell myself to relax and enjoy the moment.  So I tried.  I tried to forget the people around me who kept wondering why this momma kept oohing and awing and sneaking pictures of her date. <grin> 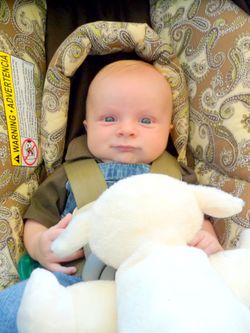 He started to get a little tired toward the end of our lunch and wanted out of his car seat, and I thus became anxious.  He was fine when I held him, but I didn't want to push it.  I'm much more relaxed if Matt is with me, but if I'm by myself or with a friend, I am more uptight.  So we wrapped up our lunch, I took my chocolate cupcake with butter-cream frosting to go, and the soothing movement of walking quickly knocked him out.

But what I choose to remember about this priceless lunch was not the anxious feeling I had about making sure he wasn't disruptive to other people, but the endearing grins I received by my precious baby boy who was utterly fixated by his momma.  I can't quite describe the magnificent feeling it was to know he was captivated by me and showing off his toothless grin to bestow joy upon the one fixated on him.  Just last June, I could barely imagine myself as a momma, having difficulty accepting this new role in which I was about to set foot.  Oh yes, I still move forward in the role with some trepidation and much, much cluelessness (is that even a word?).  But as I reflected upon that June afternoon at The Steeping Room journaling about the baby in my tummy, I couldn't help but be taken aback at the blessing I now saw sitting next to me.  For what once only seemed like a figment of my imagination, and one to be feared at that, now sat a real-life prince.

I very much understand your trepidation. The one thing that saved me was a dear friend who told me that if people are shooting you ugly looks because your baby is fussing - it's their issue, not yours. :-)

You are, after all, very conscientious and considerate of others, and it's not like babies come with an on/off switch.

You were right to let yourself get caught up in flirting with such a charming young man! That is the sure-fire cure for being self-conscious about other people's cluelessness (*I* think it's a word!) about your new lovebird.

I think I am seeing more of Matt in your little man! Especially in that picture of him in the car seat, though (of course) his coloring is all you. I'm so glad you enjoyed your special date with him. Can't wait until we can take our boys out together!

I can't help but say it every time! That boy is cute!

Girl, you just keep taking that sweet baby on dates! The only way to get him used to being out is to take him out. :) Pretty soon, he'll be charming the pants off everyone in the restaurants!

When we would take Tater Tot out and get "those" looks from the other diners, we would grin and say something like, "Don't worry! Our record for leaving a restaurant with a screaming baby is 6 seconds!" That usually lightened them up once they realized we weren't going to make them suffer if the little one started wailing. And on the few occasions when Tater Tot did get a little fussy, guess what? As soon as we'd get up and start apologizing, the other diners would tell us not to worry about it and that they'd all been there.

One lady went so far as to say, "People who go to restaurants and expect to find NO children are seriously delusional." We thought she was a scream, not to mention right on the money!

Plus, Brennan is so darn handsome, it would be a shame not to show him off to the public! :)

oh boy. he's a boy. so cute. i cant resist everytime i see him. i wanna pinch his cheeks!!!

Let everyone else said, i don't think people really mind, esp if they see how much you're trying to be considerate of them. plus, just show them Brennan's cute face and they will be oohing and aahing in no time. :D

btw, have my mail gotten to u yet?

A prince he is, indeed! He is gorgeous!

What a sweet idea - to go on a mommy-son date. (If only brides could understand that this is how it felt at one time for their mother-in-law with her son, the bride's husband! But I'm not aiming that comment at you! lol)

I wonder if some of those stares you received were from ladies who were wishing they had the nerve to go over to your table and oogle your little one. If had been my three sisters and me, we probably would have wanted to crowd around you two, to ooh and aah over him. And compliment you! ;-)

This is beautiful, Meg. I'm glad you had a wonderful date with your little man. (And I, for the record, can totally relate to your out-and-about worries. Good for you for focusing on the good!)

I can relate to your worry about the plane ride. We are flying from Virginia to Iowa at the beginning of May to see my husband's family. And Thomas is just like Brennan, an angel unless he is being burped or starts to hate his seat. We are not buying a seat for him on the plane, so he will be being held, but he generally loves that.

Make sure you have a bottle ready for takeoff and landing (especially landing!) as sucking will help alleviate ear pain. Thankfully my little guy is pretty interested in nursing much of the time, so hopefully I can distract him with that.

You have got yourself one cute little guy!

He is so precious!! Remember that a lot of those stares are people that just want to see your precious little baby!

I too had the same trepidation with my babies and so we only ever take them to family friendly restaurants, and not very often to those even. I am always conscience about others because I think about how I feel when I am out on a date with hubby without the kids and someone's baby is crying the whole time.

I'm sure he'll be fine on the plane...the lull of the engine usually puts them to sleep, just have something for the ear pressure!