Not only (as of last Friday) is my baby boy 15 weeks old, but a year ago today is when we were flabbergasted to find out we were pregnant!  Pulling the pregnancy test out of the trash can to find myself staring at not one, but two pink lines, left me stunned with disbelief.  Fast forward 52 weeks later and now the precious child of mine is a reality that I get to touch, kiss, and with whom I purely delight!  Here are some of my favorite pictures from the last few weeks and some fun milestones, observations, and what-have-you about my Chunky 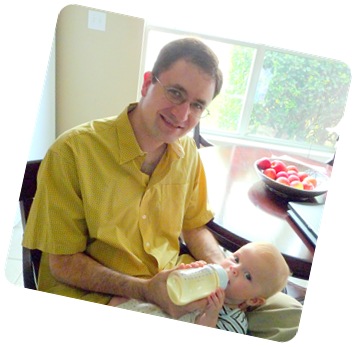 He’s becoming much more coordinated.  There have been a couple of times I’ve found him with one of his hands in his mouth while at the same time playing with one of his feet with the other hand.  And although he still puts up a big fuss when it comes to burping, he has found great amusement in helping hold the bottle…with both hands.  I guess it’s his way of making sure it stays in his mouth, trying to avoid the burps.

One of his favorite games is to babble back and forth with us, and he’s making more noises using his tongue.

A couple of weeks ago, he had his first giggle while playing under his play mat.  He’s full of smiles, but sometimes he is just a hard sucker to cr

ack!  It takes him a little while to flash his smile at other people.  However, a slew of smiles is guaranteed when we go into the bathroom and play in front of the mirror!

He’s more ticklish on his feet.

He enjoys going on walks, particularly when he’s faced forward in the Baby Bjorn.  He loves being outside! 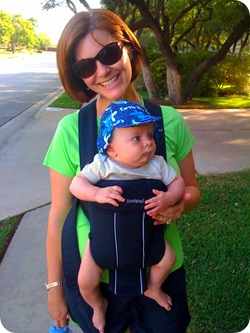 My baby boy is an observer, a serious observer.  He loves social activities and discovering new things, new people and new places.  He studies everything with intent and purpose.  He has a mommy who is a pure home-body, and I have a feeling this mommy is going to have to emerge from her natural cocoon for the sake of her “social butterfly”.

He’s just about ready to roll over; it will be any day now.  He spends half of tummy-time loving it propped up on his arms and half the time despising it.   As a side note, I learned yesterday that I have to, and I mean have to, vacuum at least two times a week!  With the wetness of his drool and tears during tummy-time, he ends up looking like a furry monster if he ventures off his play-mat because of all the Molly-hair! 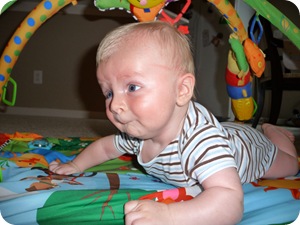 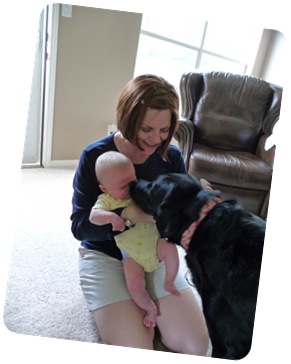 He has become fascinated with Molly, watching her every move.  And I must say, Miss Molly loves her baby brother!

He loves putting soft things in his mouth, particularly 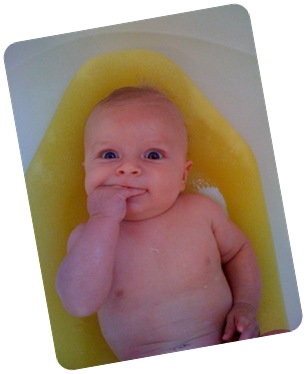 any number of his fingers.

He’s still sleeping through the night:  7:30 p.m. to 6:30 a.m. and taking 2 naps during the day.  Naps are the more difficult ones to get him to go down peacefully or not wake up too early.

I’ve started keeping track of my favorite moments with him.  A couple of the most recent ones have been 1) a lunch date we had at Chick-fil-A the other day (by the way, I heart Chick-fil-A!).  While I gobbled my lunch, he looked admiringly at me, babbled and smiled the whole time.  He was probably amused at how his famished momma was stuffing her face.  2) When I whispered sweet nothings into his ear the other day while playing, he became still and quiet, taking in all of the love.  It was a moment when time stood still.

He and his Daddy finished their first book together:  C.S. Lewis’ The Magician’s Nephew.

Every night, hubby and I find ourselves speechless as we hover over Brennan in his crib, falling sound, sound asleep.  It’s indescribable. 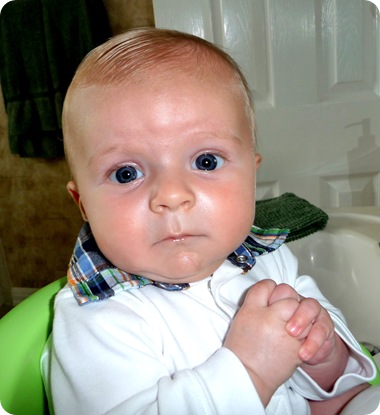 I love the little man picture at the end! He's so handsome!

he is ADORABLE!!! and growing too fast!

What a doll! He's so beautiful!

What a handsome little guy!!! I can tell how much you love him!!! And you think you are vacuuming a lot now - wait until he's crawling!!

You and your baby look great! New hair cut for you? I am probably behind on that one. Also I love the last pic with the slick hair. So handsome!

I love the one where Molly is giving him a big ol' kiss! Too sweet!

I can't tell you how much I LOVE that last picture!!!! He's too cute! I hope we can see him soon!

Super fun update on the little guy! Look at those eyes! But, hello! You're hair is adorable! I love it!

He is too, too cute and you look great! Thank you so much for all your warm thoughts. I think about you, as well. When we start traveling we are definitely going to have to meet in Austin!

I know that I'm the grandmother but I must say he is just the cutest thing EVER!!! :)
I love your words in describing how precious he is to you and Matt. He is such a gift...

So precious! I think Cannon has the same shirt Brennan's wearing in the last picture. Sadly, he won't get to wear it...it's already too small!

What a sweet and juicy little chunky monkey he is too!!! I love milestones...

He is so cute.....What sweet pictures...
Hope you will drop by and visit me. I will be blogging from Disney next week...

I can't believe how time flies ! He is getting so big and cuter & more hansome all the time--such a little boy--those eyes just melt you! Kisses & hugs from me!

Oh how time does fly. These are really fun months, from 3-8 or so. THEN they start crawling, and while they are still cute, you are more panicked. :-)