The Joke’s On Me

Last week held a lot of this: 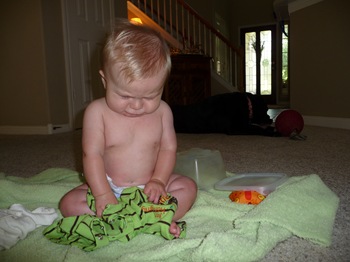 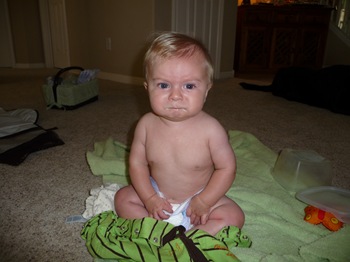 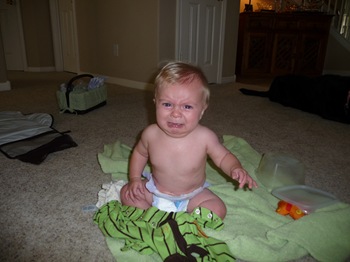 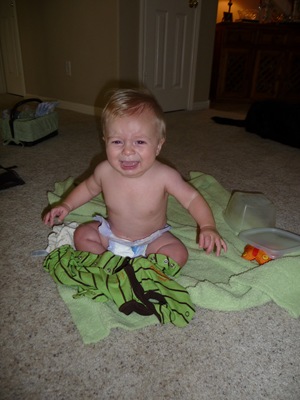 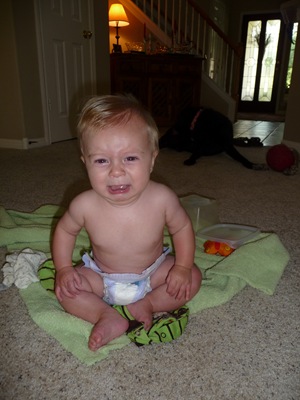 It was pitiful.  Too bad no one was here to take a picture of me in tears.  Oh wait, that wouldn’t be as cute.  Last week was a week I do not care to repeat.  Teething (at least that’s what I think was causing such misery) was getting the best of both of us, and he has yet to cut a tooth.  That, and the fact that after two and a half weeks of travel with constant attention from grandparents, an uncle, two aunts, and his Daddy, he was simply bored by his Momma.  I couldn’t put him down for a second without a flood of tears ensuing.  Add to the mix a Momma who 1) was reeling in all sorts of emotion with hard news coming from one direction after another, and 2) trying so hard to respond with compassion, yet failing time and time again, to a baby who obviously was not feeling well and crying all day long for days, made for a not-so-pretty picture.  I was quite fearful that my laid-back baby full of smiles had been mysteriously abducted and never to return to my arms again!

But then, there were two who came to the rescue. 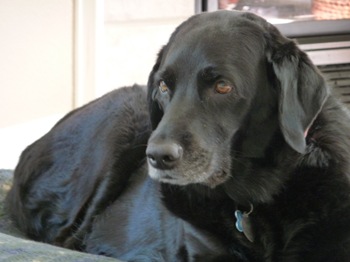 Brennan has a small foam ball that he loves to play with and chew on because it’s so soft.  Apparently, Molly thinks it’s her ball too, and enjoys gnawing on it as well.  I’m trying not to think too hard about the same ball being mauled on by both my baby and my dog.  Anyhow, when I was playing ball with Brennan one afternoon, Molly proceeded to join in the fun, so we started playing fetch with her in the house.  Her antics with the ball, along with my cheering and clapping led Brennan to burst out into a giggle frenzy!  He got such a kick out of watching Molly play with his ball.  We have the best time hiding it from her now, too, and watching her try to find it.  After a day of sobs, Molly must’ve known we needed some rescuing!  She now expects to play ball every afternoon. 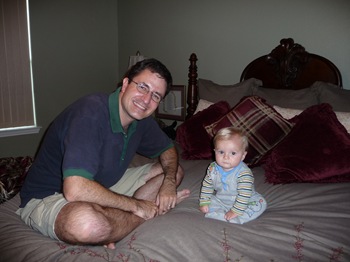 Daddy, oh, Daddy.  Every night, I was in tears after our long, hard days last week.  It didn’t help matters that when Matt walked in the door, Brennan lit up.  So it will be from this time forth and forevermore, of that I’m sure.  I just need to grin and bear it.  Other moms I talk to attest that their household runs the same way.  Matt had a launch late Thursday night and he was up from 10 p.m.-4:30 a.m. at work, but was kindly willing to get up with me Friday morning to help with Brennan knowing I had a lot to get done, and I was really struggling with depression after my hard week with Brennan.  Well, whomever abducted my son decided that the perfect time to return him would be when Daddy was home!  Matt worked from home the rest of the day, and Brennan was back to his old self the whole stinkin’ day!  Joke’s on me.

Brennan did great even eating out at Chuy’s!  We had a fabulous weekend hanging out and playing in the yard with Molly and the hose (Molly got him to giggle some more)!  Oh, what a blast!  So between Molly and Daddy’s successful rescue operations, we had one fun dude… 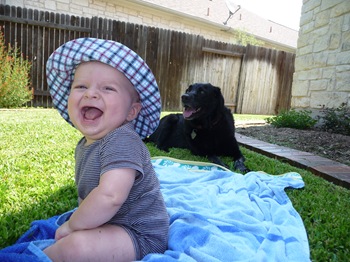 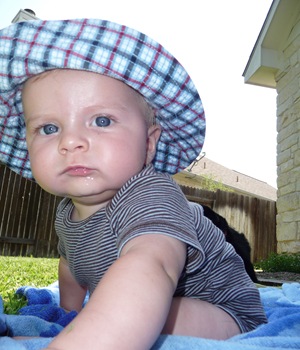 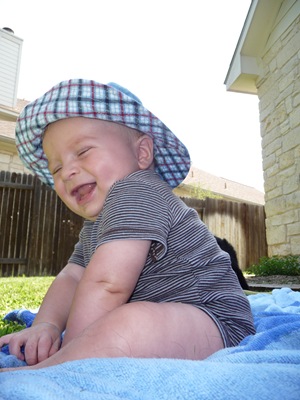 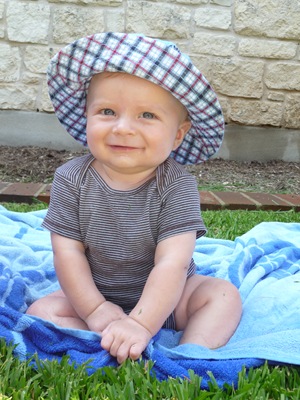 And one happy, albeit, punk’d, Mommy!

Oh, Meg. Bless your heart! I'm sure Brennan is teething. Try having him chew on a washrag that you've frozen. And then you should try sipping on a margarita that you've frozen as well!! :) And Daddy will always be able to swoop in and make things better, which stirs up all kinds of emotions in us mamas! On one hand, we can't help but feel a little jealous. On the other hand, we're grateful for the relief they provide at the end of the day. What a roller coaster we ride! I promise you, though, the sun absolutely rises and sets with you in Brennan's eyes. And this teething thing? It will pass...eventually! A little Tylenol might help you both, too!

Hang in there, girl! Don't forget to remind me of these words in a few months, okay? :)

So sorry your week was so tough --those babies are mysteries! You never know what may spark a smile or a cry. So glad Molly & Daddy came to the rescue. He does look cute though crying and smiling but it's a good thing sound effects don't come with the pictures.. Hope he is on a happy streak this week!

Oh mama! So sorry for the tough week. Babies are small and cute... but a whole lot of noise sure comes out of them. Glad you have Molly (who looks "cool and chill" in the pic) and your hubby. And your precious baby who is also learning alongside you. Will keep praying. Keep it up!!

Hey! We have the breen and brown monkey outfit, too! Our babies are clones. I am sorry you've been getting hard information coming at you. It's so difficult when you are tired and emotionally beat down and you have a Little One depending on you. I'm thinking about you.

Don't underestimate the first few days back from a different routine or place!!!! The mommma gets the brunt of it!!!! With 3 kids now we have come to a point where we make decisions based on me knowing I will get the brunt of the ciaos the day after:)

I have SO been there! I was convinced my daughter hated me when she was teething!!! (((HUGS))) He is so adorable!! OH - and I STILL have days when I just sit and cry together with one of them.

So glad he's back to himself! We had so much fun seeing him last week.