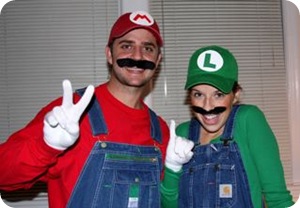 Sunday afternoon, I received a text message from my brother saying, “What if I started a blog called Spicier Magnolia?”  I chuckled.  Or maybe cackled.  First off, his comment seemed rather random to me.  Mac, start a blog?  Really?  It has taken a little, no, make that a lot, of coercion to even get him to read my blog!  I have to directly email him posts I want him to read (which I will do with this one, by the way).  And he’s commented once in a blue moon.  Literally, just once, and in that instance, I really wanted to know what he thought about the post so I gave him a deadline to comment.  He always told me growing up that he didn’t need a second mother.  I guess that tendency of mine still rears its ugly head now and then.  But now I have my own child to appropriately redirect that bent.

Mac’s wife, Julie, on the other hand, is not just one of my avid and faithful readers, but commenters as well.  I’ve said it before and I’ll say it again, bloggers love comments.  So when I got Mac’s text, it was rather out of the ordinary.

Fast forward to yesterday afternoon when I received an email from Julie announcing “Big news everyone!”.  My eyes honed in on those words like a honey bee to nectar.  And I’m pretty sure my heart even skipped a beat.  Plus, I thought, “No way they would announce that kinda news over email!”  The phrase “big news”, particularly written by a married couple, always suggests pregnancy.  It’s unspoken truth.  They’d surely both crawl up into little balls and never come out of hiding if the “big news” my mind immediately leapt to had really been the “big news” they were announcing.

So after I caught up with the avalanche of my mind’s thoughts, three seconds later I read, “(the kind of big news you share over email.....medium big news).”  <Deep breath>  <Pulse resumes normal rhythm>  The news?  Mac started a blog!  Well, I’ll be danged, is right!  I have yet to know what was the impetus to this decision.  But no matter what, I love it!  And I’m already addicted.

Julie is a “ghostwriter”, but has since nearly tripled the amount of posts that Mac has written in a matter of days.  This is my theory, to which I hope neither of them take offense:  I think she wanted a blog but let fear get to her so she didn’t do it; Mac was tired of hearing how she wanted to write one but couldn’t bring herself to do it; so Mac schemed up an idea that he’d start “his own” blog knowing deep down that Julie would eventually post more than him and it would slyly end up becoming hers; and I foretell that she will one day get tired of hounding him about writing and officially declare it solely hers (which is, by the way, what I did to Matt with Ink Pots).  That’s just a theory, mind you.  I gladly want Mac to prove me wrong.

I love that my brother started a blog!  He will now understand my love of the “bloggy world”, ‘cause I sure love all you Internet peep friends of mine, I surely do!  So the name of the blog is About Wheat (a take on their last name, Wheatley).  Go to http://www.aboutwheat.blogspot.com and take a peak.  I love it.  Oh, wait, have I said that already?

oh girl, he already said he wanted twitter before the blog! and he did confess that he secretly wanted me to blog on his blog, but he never heard me say that i wanted a blog. so your theory is half true. if this was clue. you would have to stop playing. but thanks for the shout out! :)

Thanks for the intro to your brother's blog. I paid them a visit and left a comment.

How cool! I'll check it out! BTW I have a picture just like that of my husband and his friend dressed as Mario and Luigi years ago for Halloween!

You two are so sweet for going to my brothers blog and leaving a comment.  :)

I hope you all are having a great night and thanks for supporting him in this new endeavor.

That's awesome! And you are right - Bloggers LOVE comments! Thank you so much for the uplifting comment you left on my blog. I didn't even laugh about your day with Brennan in just a diaper. It's too close to home to be funny quite yet! :) You're awesome!

That picture is hilarious!

Okay, you all have got me hooked. My teacher's union says "No Facebook!" So did my ex-principal. However, my son posts pics of his kids on his facebook, so I'm seriously considering opening my own with restrictions as to friends (obviously no students). But, regardless, I'm smitten by blogging and wonder if there is a niche for a grandma who is 55 and who's only been a teacher 11 years because I didn't graduate from college until age 43. Obviously I'd have to be careful about what I said about the teaching part. But I think the support you women have built up for each other is tremendous! Your blogs inspire me! I love yours, Meg, as I've told you before via email. I even have my own diaper in public story that involves 2-yr.-old Addy Jane, my son's youngest! I think it's great your brother and sister-in-law have started one---I wish my son and wife would be so inclined. It's "safer" for me than Facebook. Anyhow, I'll check this new one out.
Sara's Ohio mom/gma

I tired to comment on your brother's blog, but I don't have any of the accounts. My google one always blocks me the second time I try to use my password. Makes me wonder if I can negotiate this blog world.

How I LOVED your closing! "Watch out world.....
Can you only imagine what it would be like to be awakened every morning with that?! Wonderful introduction to I'm quite sure a new wonderful blog!

Thanks for visiting Macs blog!  And I definitely think you could easily catch onto this bloggy stuff.  In addition, there is certainly a niche for a grandma who is 55....  In fact, I read a number of grandma blogs and love them.  Hope you have a good weekend.

I love it...all of my four children are writers! Excellent ones at that!