‘Tis the season of countdowns.  Seven days until Thanksgiving.  Thirty-three days until our seven year anniversary.  Five weeks and two days until Christmas.  A few more after that and it will be 2010.  2010?!  Holy cow!  Wasn’t it just yesterday I was a junior in college smoking my first (and last—it wasn’t that great) cigar with my friends who will remain nameless Corrie and Eric, ringing in the turn of the century over Christmas break?  We’ve all grown up since then.  <grin> Anywho, back to my countdown.  Only a mere fifty-nine days until Brennan turns one year old.  Three days after that, Matt will turn thirty-two.  My life is on fast forward, and I know I’m not the only one who feels like that.  Give me just a small moment to breath.  To stop and breath ‘cause with everything coming up, all you have to do is flip a switch and I’m a stressed out maniac.  And if anything this season shouldn’t be, it’s stressful.

Minus two days ago was Brennan’s 10 month birthday.  He and I were in San Antonio together with Pops and Meems where he baked sugar cookies we’ll have for Christmas; 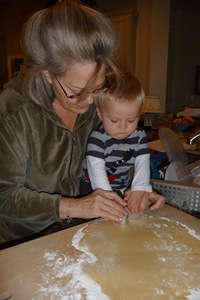 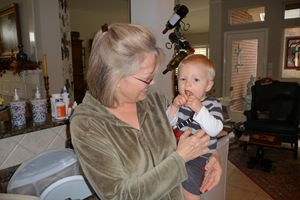 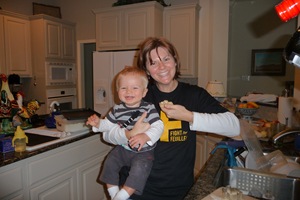 made his first zo 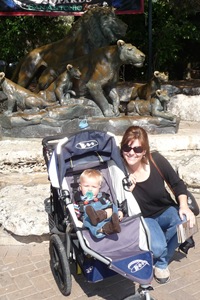 o visit (thanks, Meems, for going even though you don’t like zoos very much!); entertained four puppies; tried a whole new assortment of yummy food that Meems made him (including a baked potato, mushroom and barley soup, pigs in the blanket, and some of his perfectly baked sugar cookie); and mastered going out the doggie door.  It was a full and very wonderful weekend!  Now we just need to get Daddy feeling better and cross our fingers that Brennan doesn’t get sick before we leave on a jet plane for some celebrating with Matt’s family in California for Thanksgiving! 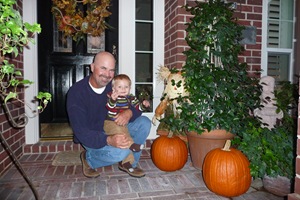 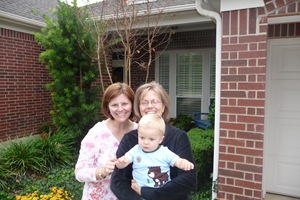 So here are some snippets about our ever-growing gem of a boy who is just a blink of an eye away from being a one year old! 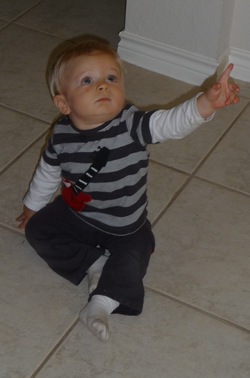 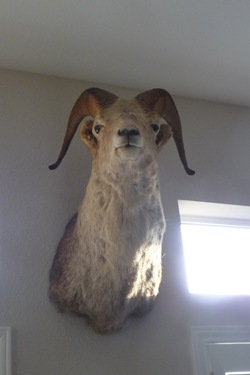 These last ten months have flown by, little boy.  And I know the next two are going to as well.  But they also will be filled with so many special memories and celebrations.  What a privilege it will be to witness you beholding the wonder of this season through your eyes for the first time.  May we stop and be still, experiencing it afresh alongside you.

Oh my gosh! LOVE the Doggie Door pictures. And isn't he just the cutest boy??? Love him!!!

Seriously, you are such a good momma, I love the way you love that little man of yours. He's going to be a heartbreaker, watch out!!

see dogs are the best for sharing food with. like vegetables. my puppy was a healthy eater! too bad i wasn't. i still get nervous about the month old cookies. but i'm trusting you on this one! and yes, this whole comment was about food. i'm clearly starving.

Oh my he is just super cute! Looks like you guys are having fun! I know what you mean about the time flying! I hope you have a wonderful Thanksgiving! (And my hubby is sick right now too!)

I am so sorry he got sick! When do y'all leave for California?

Ok, I'm going to have to follow Julie's lead here on the cookie thing, you're going to eat them at Christmas? Will they keep?

Brennan is one seriously handsome little man. Christmas will be amazing!!

Ive had to reassure Miss Julie that the cookies will not be sitting out over the next month growing moldy and stale.  Instead, they will be nicely kept in the freezer until their Christmas debut.  But the questions make me wonder:  would people not want to know their Christmas baked goods have been in the freezer for a month when I give them their gift defrosted but still yummy??? :)