This little homebody ventured out by herself last night. Whoa, Nelly! Since Pioneer Woman (PW) announced the c 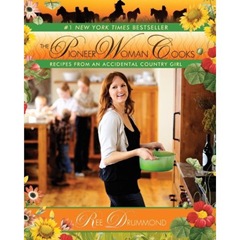 ities on her book tour weeks ago, I’ve had my calendar marked for the big day. She recently published a cookbook entitled The Pioneer Woman Cooks: Recipes from an Accidental Country Girl.  And as you probably know, I’m a sucker for a good cookbook. I’ve made a few of her recipes, all of which have been scrumptious. Her magnificent, detailed action shots of the cooking process are quite helpful. PW has written about each of the cities she’s visited for book signings, and as the day approached for her to be in Austin, I found myself getting more excited…and more nervous. I always get freaked out about meeting people I respect, admire, who are authority figures, or people I may not personally know but dream of being friends with one day. I’m a little weird like that.

The signing started at 7 p.m., and I knew people were already arriving as early as 3:45 p.m. to get in line. Simply knowing that made me want to forego the whole thing. But I fought the desire in me to stay home all nestled in with my family. I braved the cold, faced the Austin traffic and the crazy parking situation at the bookstore, and got there at 7:05. As I was squeezing my not-small-enough car into the tight “small car only” space with part of my wheels tucked tightly against the curb, I literally thought to myself, “Oh, Lord, I don’t want to do this. What am I doing here?” But in I went, against all of my own wishes. I felt so out of place.

I entered on the first floor level, was directed to the cashier line to buy the cookbook I’d need in order to get a ticket, and saw in the corner of my eye a familiar face. Is that him? Is that Pioneer Woman’s husband, Marlboro Man? He was behind me browsing some of the book tables so I didn’t have the best angle on his face, so I checked his feet first: yep, cowboy boots. Then I did something I can’t believe I’m going to admit, but it was the first thing that popped into my mind, and I blame it all on Pioneer Woman herself. She writes every now and then about how Marlboro Man’s back end, clothed with a pair of Wranglers, makes her swoon. And then she posts a big ol’ picture of him from the rear for all the world to see. I wish I had the time to search her archives to prove this, but I don’t. Shamelessly, the second most natural thought entered my mind: Look at his bum. Maybe I’ll recognize it from his picture. I. Kid. You. Not.

So my eyes traveled to those pair of Wranglers to see if that would be his tell-tale mark, thanks to his wife. Nope, I didn’t recognize it. Finally, he turned in a direction I could catch his face and confirmed that yes, it was indeed Marlboro Man. Thank goodness that the only man I’ll be able to recognize from his bum is my own husband’s!

I ventured upstairs to receive my purple wristband and came upon hundreds of people, standing and sitting, waiting for Ree to make her appearance. I knew immediately I wasn’t going to stay to get the cookbooks signed as my purple colored wristband would be the last color group to be called upon. If I were 20 again, without a baby to wake up to in the morning, I’d stay. But I’m not that young and vibrant anymore. Simply being swept up by the crowd and anticipating getting to see PW in person was enough for me. And well, there appeared Marlboro Man right before me again. If I’d had the nerves, I would have asked him to sign the book, like several other women did: 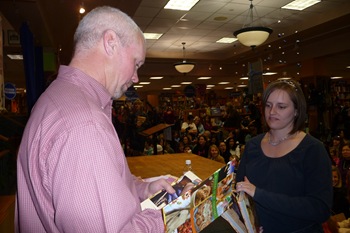 My eyes never, never again ventured to his Wranglers!

Ten minutes later, the lovely lady herself appeared to answer a few questions. She would be a delightful person to have for dinner sometime. Would it be rude to make her do the cooking? The Q&A session lasted about 15 minutes, time which allowed us to glimpse her beauty in character and feature, yet unpretentious in demeanor; her humor; and her authenticity. Her four “whippersnappers” were there as well, but this is such an awful picture:

Two questions were asked that I’ve been the most curious about myself: 1) does she read all of her comments (some posts generate up to the tens of thousands of comments) and 2) how does she do it all (a mom of four, wife, homeschooling, blogging about 4-5 posts a day, running a cooking website, etc..,). I’d still like to know. It’s mind-boggling to me all that she does. She works hard, and it’s obvious she has a lot of fun with it, too! 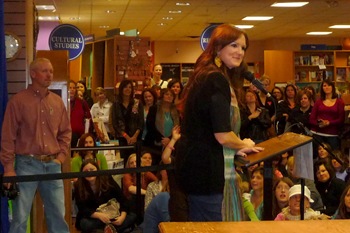 After the Q&A session, I left without anything signed, but content and glad this homebody ventured out for an evening. It was worth it, Wrangler sightings and all.

What was her answer about how many comments she reads?
(Obviously she CANNOT read them all). GLad you had fun. She doesn't appear to be coming to the midatlantic any time soon. sigh.

HI, Kimberly! If I heard her correctly (it was sometimes hard to hear), she does read all of her comments! The one exception is for the giveaway posts where she randomly chooses the winner, and those posts usually generate the most comments.

Meg, I hear you on the not wanting to stay out late thing. Motherhood will change a person. I used to be a Black Friday shopper, but sleep and sanity has now won over! I ordered my mom her cookbook for Christmas; I know she'll like it. We've both made her recipes in the past and have always been impressed with them!

Oh Meg, GOOD FOR YOU! I'm so glad you went. I was very tempted and I can totally see myself thinking the same thing about identifying MM by his bum! She is too funny when she writes about that!

Oh, Meg! I am so proud of you for going! That would have been hard for me. And you looked at his Bum! Oh wow, I love it! I would have done it, too, but I think I wouldn't have been able to tell anyone! I love you - you are awesome! Did she answer those questions? I am guessing she does not sleep? I need my sleep so I'll never make it to her world! Anyway, I wanted to let you know how glad I am that you went!!

u know what? i would have probably sneaked a peek at those wranglers too. hehehe.

I am so jealous! I LOVE the Pioneer Woman! I was so laughing about Marlboro Man's bum...I would have done the SAME thing!! That and his forearms!

Oh I also wanted to mention that Ree put an address up on her blog for you to send the book to and she will sign it for free and send it back!

The Marlboro Man sighting of yours is classic!

OMGoodness, I was there and it is totally out of my comfortzone to do this kind of thing. I am a mom to four who used to be the life of the party, never met a stranger, go to girl, but something changed when I had kids and I am such a homebody now. I was going to chicken out at the last minute, but my (SUPER) husband went to BP early and got me the orange (first group) wristband and surprised me with it. I talked my 7 year old daughter into going with me. Traffic, parking garage, lines of strangers later - I got my book signed and more than anything, I felt proud of myself!

Thats awesome, Sonja! I am so glad you had a wonderful time and got out.  How sweet of your hubby to go early and get the wristband for you. It was a fun night. :)

I noticed that PW has made mention of Marlboro Mans Wranglers since I posted this, so I definitely felt validated. ;)

My cousin didn't get her book signed, either. ;) You aren't the only one, I'm sure.

Nope, I definitely wasnt the only one. :) And Im ok with that...Im loving my cookbook! Merry Christmas!

The MM man sighting is almost as exciting as the book signing. I knew where you were going before your 3rd word..My thoughts were ahead of the words.