It’s day two of staring at a white screen not knowing where to begin. That’s happening more often to me than I’d like because what is in my heart wants to gush forth like a geyser, but I can’t seem to find the words to type, at least not adequate words. Around the middle of last week, we knew our Memorial Day weekend was going to look a lot different than what we’d originally planned. Having guests over for dinner, a graduation party, and the church picnic we were supposed to attend were appropriately canceled to allow our family some sacred space. I wrote last week briefly about the health status of our friend, Robert, and I want to thank you so much for praying for he and his family. On Friday night, my brother, Mac, flew in, knowing that more than likely, that would be Robert’s last weekend on earth. His health very quickly and unexpectedly digressed over the past week, and Mac and some other close friends of Robert’s knew it was time to take advantage of each precious moment remaining.

I had no idea what my role was to be this weekend other than providing Mac and my parents, who also came into town, a quiet place of rest and peace to mourn, to reminisce, to contend with God about circumstances being what they should never be: a 28 year old husband, a father to three children under the age of five, a brother, a son to a man who also lost his wife unexpectedly two years ago, passing away from cancer that riddled his entire body. I didn’t know if I should join Mac on Saturday in visiting Robert and his family or if I’d just be in the way. I don’t know why in such acute emotional times like these where your sole desire is to be an encouragement and a source of comfort and grace, that insecurity and chronic self-consciousness of what other people think and fear of saying or doing something wrong can be so inhibitive and debilitating. I don’t get that.

Mac and I ventured out to Burnet together where Aimee’s side of the family was all in town for what was supposed to be a family vacation. Robert’s family had now arrived also. There were a few other visitors that were there throughout the day, and my brother’s other best friend, Oscar, also flew into town to be by Robert’s side. Josh and Shauna, Aimee’s brother and sister-in-law, are some of my dearest friends, and I spent most of the day alongside Shauna. It was the first time we’d seen each other in a number of years and not the circumstances we ever thought would be the reason we were together. The only words that made any sense at all to speak that whole day were, “Come, Lord Jesus.”

It was an honor to be by Mackie’s side that day. There are the types of friends that are as close as a brother, and the young men that joined Robert that day are of that kind. We ache and grieve for our friends, though there is no doubt they have been held by God’s strong grip over the past year. After going home for some Chuy’s take-out and to have a little break, Mac ended up driving to Burnet again and remained there by Robert’s side as he passed away and entered into Jesus’ presence. It was a sleepless night filled with heartache.

I’ve been trying to piece together why this feels so impactful on my spirit. For one reason, our little family has been unceasing in our prayers and intercession for Robert and his family over the past year. That’s not a boastful thing, it’s that we’ve cried out to the Lord for Robert’s healing, we’ve agonized in our hearts over all that he’s so bravely endured. We’ve hoped, we’ve celebrated in the good tumor markers, and we’ve been moved to tears and waves of emotion over the bad news. It’s that we’ve allowed ourselves to walk with our brother in his suffering, to carry just a little of his burden. Another reason is that he’s our friend. While he was one of my brother’s best friends, Matt and I have had the privilege of getting to know Robert a bit more with him living in Austin and with the special occasions we’ve attended together in recent years, like Mac’s wedding. I knew Robert from when we were little, but what a privilege it’s been to see him as the man, husband and father he became: a humble, wise and godly man whose faith in Jesus is a testimony to many. Thirdly and probably most poignant to me right now is that Robert’s death has had a rippling effect into more overlapping, mutual friendships than any other I’ve experienced. My family knew Robert from not only the church we grew up in but also a youth group called King’s Kids. Mine and Robert’s parents were a part of the same ministries through church, and Robert and Aimee met through King’s Kids. So throughout the 23 years of my life in El Paso, both Robert’s and Aimee’s families were a huge part of our lives and many of our mutual friends. I’ve experienced deaths of friends and family members before, but it is stirring to see how many dear friends of ours from the El Paso community have been impacted by his passing. Unlike other deaths I’ve experienced, Robert’s affects numbers of people from my whole childhood. Comments on Facebook and Robert’s blog are an indication that Robert’s story and legacy have reached far and wide.

As someone with a keen, vivid memory, I hold a special place in my heart for those years in El Paso. Reflecting on that time puts me in high nostalgia mode. Time has always been a mystery to me, how fast it goes by and the emotions that it provokes. It simultaneously makes my heart swell with joy and fondness, and it also has a bitterness to it and the stark realization that time cannot be contained or controlled. The precious El Paso community through St. Clement and King’s Kids have shared a lot through the years. We’ve gone from being little whippersnappers and awkward teens into grown adults who now have kids of our own. This community has celebrated marriages together, visited each other, kept in touch through Facebook and emails, and been there for each other through the loss of parents and spouses. And now many of us will come together this Saturday to both grieve the loss of our treasured friend, Robert, and celebrate the life he faithfully lived in Christ, who will no doubt be lifted high and exalted for the faithful God He remains to be. We will see many faces we haven’t seen in a long while but who are joined together through shared experiences, friendship, and ultimately Christ Jesus. In many ways, it might even feel like old times again. But then again, something will be very different.  A significant void will be felt. But we do not grieve as those without hope because as believers in Jesus, we have no doubt that we will see Robert again. He will be there to welcome us into heaven, likely with his camera in hand and that big grin on his face. 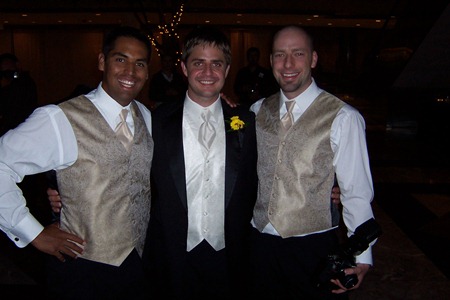 Oscar, Mac and our dear Robert

Meghan, I'm so sorry for the loss of your friend. Having just been through something similar, I know the heartache you feel. I will remember your family and his in my prayers.

I am praying for comfort in this time of need. Patrick and I just went through this last month with his best friend, Jon. One day at a time sweetie. Hugs...

I'm so sorry for your loss :-( Thinking about you all today.

Praying for you all right now.

I am so, so sorry, Meg. I can't begin to imagine the pain that so many are feeling right now (and will feel even worse as the shock wears off). Praying for Robert's precious family. Your tribute to him was beautiful, friend. Love you!

i didn't read this whole post yet, but i just had to say i love the last line! so true!

PS those sticky buns are the ones that i ate growing up every year for my bday. i actually made them when we went to MD with Oscar and Robert!