I’ll just keep the pictures comin’ until you scream, “No more!” Until then, pop yourself some popcorn and enjoy.

To kick off feeling better and Father’s Day weekend, Brennan and I met our friend, Stacie, and her three girls at Jungle Java, a perfect indoor play area for us mommas to chat and the kiddos to wear themselves out. Upon leaving, I thought it would be fun to try a new yogurt place called YoYo’s that opened down the street from us. Brennan couldn’t have any because he’s still off of dairy products, but he enjoyed a few chocolate chips. And I found myself a new summer treat! 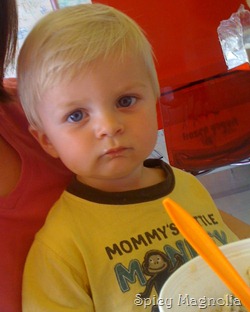 For Father’s Day, I put together eight different clues/rhymes for Matt to read throughout the weekend of things we were going to do. Friday night was a night to crash and after putting Brennan down, we climbed into bed and watched Iron Man. I saw the sequel a few weeks ago without having seen the first one and loved it, so I thought I’d give the first one a go. And it’s an action packed film, so of course hubby wouldn’t mind seeing it again <grin>. I loved it so much I watched it twice during the weekend!

Saturday, Matt got to sleep in and be awakened by a precious boy with a cup of hot chai from Starbucks. Then we filled the day with fun! First stop was an awesome splash park we tried for the first time.

Watch out, the water is gonna get ya! 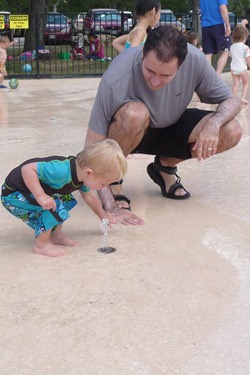 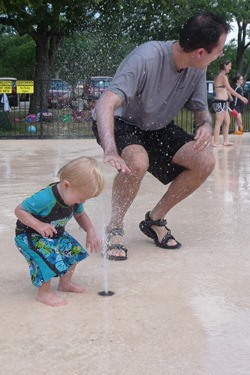 Lovin’ that wet boy of mine. Usually I’m the one getting wet playing. It was nice for a change to sit on the sidelines and watch. And stay dry. And day dream. 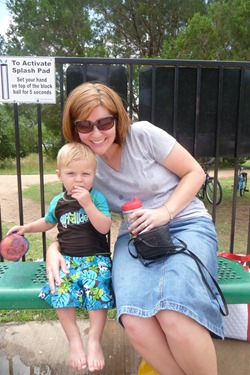 Here’s your next clue, Daddy. 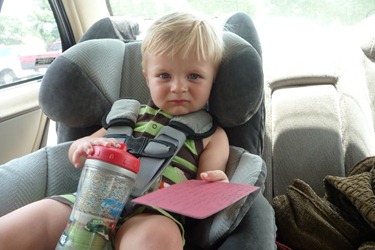 There’s nothing like a Mighty Fine burger. I’m still cool even though I’m wearing a silly makeshift bib. 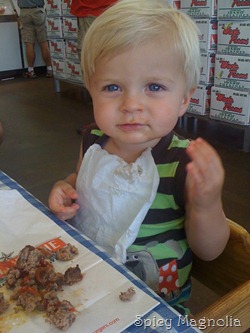 What happens to the makeshift bib after hit hard by drool, ketchup fingers, and water. 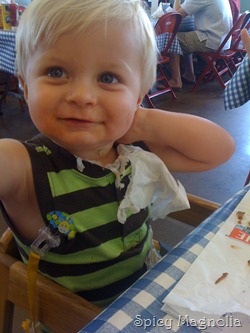 Because Matt’s iPhone sadly looks like this, and because I love him to bits and geeky tech gifts speak love to him, I surprised him by pre-ordering a new i 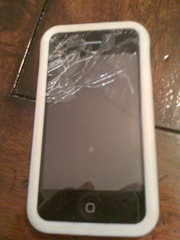 Phone. I kept him on his toes about his gift even after he read one of his clues, and you should have seen the grin on his face as he stood in front of the Apple store realizing I wasn’t just dangling the carrot in front of him. He was gonna get to eat that carrot!

Sunday, we went to church and ate lunch at Chedd’s. After naps and swim time for the boys, we enjoyed grilling out kabobs with a fruit salad and corn pudding. An ice cream pie topped off the meal. Here is what the table looked like. I had it set for Pops and Meems to join us for the day, but they weren’t feeling well, so they stayed put. I decorated it using Brennan’s toys that represented some of Matt’s and my Daddy’s favorite things. 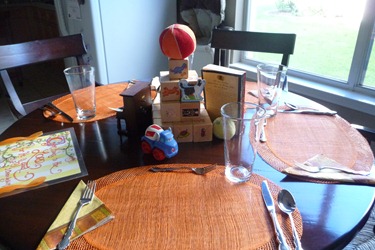 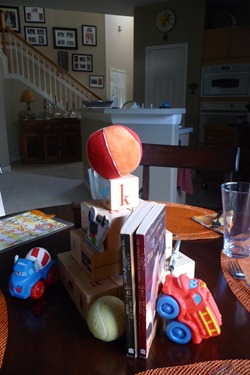 Father’s Day was nearly two weeks ago, but Matt, my Daddy, and my father-in-law, Ed, can’t ever get enough thanks and appreciation for the daddies that they are! Brennan and I go giddy at the thought of them and want them to know how much they are loved!

Oh my. You outDID yourself! And what a charmer that little Brennan is. My kiddo (about a week younger/older than yours, I can't remember) definitely doesn't look as grown up, but I can't bear to get the hair cut yet. 'Course, I haven't updated my blog in three months, so no one would know......

You are so creative with your clues and also with your tablescape!

Very impressive! I am sure your hubby felt appreciated and loved.

A person could drown in those blue eyes! You're going to have a tough time when he learns how to use them to try and get his way! Doug did that to me with his big brown eyes framed by blonde hair.

The centerpiece was so cute and creative! Also that was a cool idea to do the clues.

What a perfect weekend! You are an awesome wife!

You have such great ideas! What a great weekend! I LOVED the pictures of Brennan at the splash park - too cute!!

Aww, seems like he had a wonderful Father’s Day… How can you not with that sweet boy??? :)

You are very creative! I may have to take some notes for next year! Cute, cute, cute Brennan!

I just love pics of a blonde blue eyed boy! What a fun & full weekend you had planned! Matt was super lucky & blessed to be loved by you 2! Love the water splashing in the face! I can picture Matt's grin with that new Iphone ;)!

i love the toy truck book end. is that on purpose or it just ended up there? cute idea for a classroom.