A Bunch of Good Stuff

The alarm blared a little too early this morning. At 3:50 a.m. Dazed and confused, all three of us somehow made it intact to the airport where I said, “See ya later,” to my loves. They jetted off to Canada this morning and should land in about an hour whereupon Brennan will receive the first of hopefully many stamps in his passport. Little did we know that we were supposed to pay an international tax for Brennan’s travel and it nearly jeopardized the boys’ final leg of the trip across the border. But I happen to think that blondie simply captured the hearts of the flight crew that they had no choice but to transport him to his final destination.

I mean, really. Who can resist this face? 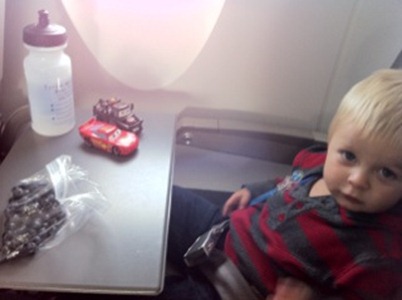 Matt’s dad runs a school for children with learning disabilities in Canada. He’s commuted 20+ years to Canada from Virginia and this is the first time any of his kids have been able to see first-hand the school he’s directed with passion all these years. For Matt’s birthday and Christmas last year, my parents helped Matt with a ticket to visit his dad. And a few months ago, we thought it would be great to take advantage of Brennan flying free (well, aside from the international travel tax or whatever it is) and make the trip my boys’ first Daddy/son trip. Even at 4 a.m., “Da Da” was repeated over and over and over. I think he knew he was gonna get some good testosterone time. Everything is about “Da Da” these days. He’ll see a car that looks like Matt’s car and it spurs a number of “Da Da”s. He’ll walk into the closet and see Matt’s clothes and out comes the “Da Da”. I haven’t heard “Momma” in quite awhile unless coaxed out of him. That’s alright. My man child has a great man to look up to!

Speaking of clothes, I had some slight jealousy in me yesterday of Matt who will get to see Brennan wearing some of his new fall outfits for the first time this season along with his jacket, hat and mittens. Matt endured a 10 minute schpeal about all of the outfits: what socks go with what, what outfits were for what days, when to wear the tennies and when to wear the brown shoes. And as a courtesy, I even threw into Matt’s pile of clothes a nice shirt that I encouraged him to wear when Brennan wears his nice outfit as they meet Ed’s staff for the first time. I almost tied bows around each of the respective outfits so there was no chance taken in a pair of socks being paired with the wrong outfit. I know my hubby’s weaknesses. Matching is one of them, bless him. And I’m no fashionista!

What will I do while they’ve run off to Canada? Give some TLC to Molly who has surgery tomorrow. Plant my behind on the couch to rest and watch some movies. Maybe pick up the new Francine Rivers’ book, Her Daughter’s Dream. Start on my third round of antibiotics and new steroids to kick this lingering bronchitis (I’m on week #4) to the curb. Hopefully it’ll kick the sinus infection I’ve had the past week to the curb, too. I’m desperate to feel better, so if making sure I stay on the couch all weekend is part of the plan, then so be it. I’ll happily oblige! I’ll meet my momma for lunch on Saturday. And I have the honor of treating my friend, Courtney, to a nice lunch tomorrow in thanks for the many lunches she braves eating with me and Brennan at Chick-fil-A! As a woman who doesn’t have children, that says a lot about her character, people! I’m aiming for peace and quiet. That’s what my body and my soul need. If only I’d be brave enough to turn off the TV and sit in total silence.

Last week, I recorded a bit of Brennan and a new routine we’re working on. I’m no Julie Andrews, just warnin’ ya! And I’m not sure where all the facial expressions came from. Maybe he wants to be the next Jim Carrey.

I hope to catch you sometime this weekend, friends! And before I sign off, if you want some good, albeit challenging, reads, I highly recommend these:

J.R. Briggs wrote a post regarding the possible Quran burning a few weeks ago. If you’re tired of the whole topic, this is not the same old stuff! J.R. actually called Terry Jones and you need to read about it!

Lysa TerKuerst on marriage and parenting. This post gave me some great prayers to pray for Brennan. How counter-cultural is it to pray that he’d get caught when he makes wrong choices!? Good stuff! And this one made me reflect more on the cost of my choices.

What do you think of the American church? That topic can open up a can of worms. Kathy Escobar wrote a letter to the American church that is some great food for thought. And potentially, some powerful encouragement for transformation.

And this post over at Nothings and Notions from my Noodle broke it down in a way I could totally relate to wanting to live for the glory of God in our daily lives. My daily life that looks like cleaning peanut butter and honey off the booster chair every morning. My daily life that includes giving thanks for the family bathroom at the mall that offered some privacy where I could run to to discipline and instruct Brennan when he was having the FIT OF HIS LIFE yesterday. Yes, it was a great post to remind me I have ample opportunity to bring glory to God in my daily life that doesn’t necessarily mean me hopping on the next jet plane overseas. But I’d like that, too!

Such a cute video! Enjoy your time of rest, healing and reflection while they're away. -Em P.S. We think so highly of Courtney too! She's great!

I hope you have a fantastic weekend to yourself! He is so adorable but I'm sure they will have some great bonding time! And I was laughing about your lecture on the matching clothes...I've gone so far as to put each outfit into a ziplock bag! LOL!!!!

Well, little good my schpeal did because he still had to text me on Friday morning asking about what pants went with what!! Next time I'll use your ziplock bag idea! :) Your day at the State fair looked awesome! I believe our family did the NM State Fair a number of times when my brother rode horses. It was always so much fun.