Home Archives Profile Subscribe
The Good, The Bad and The Yummy
News, the Random Kind

This weekend called for desperate measures, y’all. I’m just as tired about writing about our ongoing illnesses as you are reading about them. Matt went back to the doctor last night and after being on antibiotics for a week, he still has bronchitis that isn’t getting better. So they gave him some potent antibiotics that required a special photo ID verification at the pharmacy and hopefully we’ll send this nasty stuff to Timbuktu. Meanwhile, I’m worse off today than yesterday so my parents generously took Brennan for the weekend so we could rest and hopefully keep him from catching this stuff, too. They kindly provided us with dinner and while sympathetic, happily took our boy to their home, which will be much more fun and interactive for him. When he saw Pops, he gave him a big wave ‘hello’ and once in his arms, waved ‘goodbye’ to us. Yeah, I see how it is.

So here are a few things you should check out in the coming days as you sit in front of the television watching some football. FOOTBALL! When I think of football, I think of this picture.

It was taken a year ago. 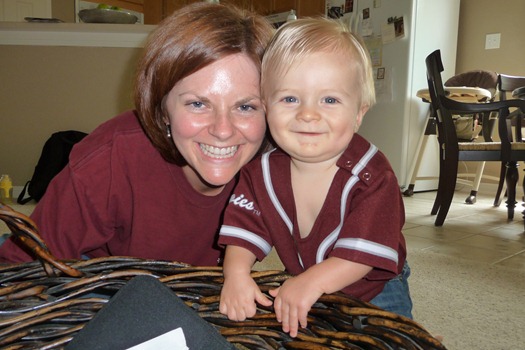 We wore the same things today but didn’t snap a photo. I think you’ll thank me for that. The boy was just as cute, if not cuter, but I’d make your eyes sore.

Ok, for the things you should check out and consider:

Hope you have a nice Labor Day weekend!

I almost peed my pants when I looked through your archives and saw the Staff Fun Day post with the "videos" we made.

Thank you, Jessica! It's good to hear from you and hope you're having a nice Labor Day weekend. :)

I'm so excited about the Compassion trip and the Radical Read-Along. I love that they're kicking off at the same time. I'm excited to hear what God has planned for you in these next few weeks... Love you!