The sound of the landing gear, as always, makes me jump a bit in my seat, my pulse beating more rapidly. And let’s not forget the sweaty hands. The desert below me was tinged with green more than usual for the middle of September. I was not ready for the plane to land, to come to a stop at the end of the runway. Twenty-two years of memories came flooding back to mind as we hovered over the landscape. The McDonald’s we met my Daddy at where he gave me my first trophy he had specially made for marking my learning how to swim. The stoplights I dared get out of the car to join my friends in a Chinese fire drill. Fourth of July picnics running around with sparklers, worry free. Well, I was worried about being burned by the sparkler, but other than that, carefree. The crisp December morning I woke up to walk down the aisle to the love of my life. The countless faces who have shaped and molded me: teachers, peers, mentors, old and young.

El Paso is a town with indelible moments I hold in a treasure box. The later four years of my life that treasure box has had to be let open to something painful that strikes us all at one time or another: death. Death of family and friends. Most of them experienced life to the full. One’s life was tragically cut way too short. It’s bizarre that a town with so many cherished memories and faces has been marked so significantly to me lately with grief and saying, ‘goodbye’. So no, I was not ready for the plane to stop. It meant one more ‘goodbye’. And in many respects, this was the final closure.

I barely fit into the dress I bought the year before, the black and white strapless one with the big flower on the front. You know, the kind of dress that makes you feel like a princess. I’d hoped with everything in me I could suck myself in well enough to make it through the entire evening intact, but it was clear by the end of the glorious celebration of my cousin’s wedding that was the last time I’d be wearing the princess dress for longer than I’d like to admit. I still can’t wear it. That night I walked around with a secret that only a few knew. And it certainly wasn’t the appropriate time to let others in on it. But one additional person would know that evening, if I could pull it off inconspicuously well enough. The cake had been cut, dancing and celebrating ensued, and I was waiting for just the right time. He left the ballroom and headed to the bathroom where I followed and waited outside, listening to the piano player and whispers of surrounding conversations in the next room. He emerged from the men’s room and gingerly walked over next to me. First thing was first though: he had to promise not to tell anyone. It was our secret for the night to share together. He promised. Hard of hearing, I had to speak it into his ears a couple of times before he grasped what I was saying.

Papa, I have something to tell you. You’re going to be a great-grandpa.

Thrilled for me, he gave me a big hug. He was delighted with the news. I’m sure it was an evening he sorely missed his love of fifty-seven years, but even still, he celebrated. He soaked in the moment of his granddaughter’s blessed marriage and the news of his other granddaughter’s secret. That night I also shared with him another first: our first dance. Aside from some childhood memories that will linger with me through time, that night will be the one unforgettable. 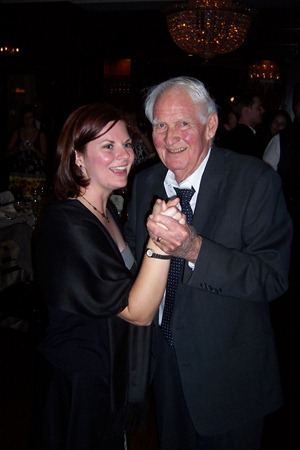 The desert has great color. Yes, driving through it can at times be painstaking, but if you look carefully, the beauty is unique and surpassing. Hidden. And sometimes so robust for all to see, like the sunsets and sunrises. There was a stillness about that Saturday morning; it was a lovely desert fall morning to wake up to. Maybe the stillness would better be described as a reverence. I dressed Brennan in his Sunday best: a maroon plaid button down shirt, khaki pants, his brown loafers, and his first brown belt. He looked like a young boy. I wore a simple black skirt and a white shirt that surprises people when they touch it because it has some texture. On my right hand I wore a ring of pearls that looks like a flower blossom that my grandmother, Cita, had given me for my high school graduation. Draped around my neck was the heart-shaped diamond necklace my other grandmother, Gaga, had been given by her love before he passed away before I was born. She wore it draped around her own neck for thirty years until she passed away.

We drove up to the cemetery, my heart starting to pound and my hands getting clammy. It was just moments before our eyes caught sight of the brown casket covered by an American flag. Standing honorably beside it were several members of the United States Navy. Having served in World War II with the South Pacific Theater as an aerologist attached to the Airwing Seventh Fleet Command, the Navy now stood guard erectly and respectfully next to Papa’s grave. The trumpets initiated the service playing Taps while the American flag was gracefully removed from the casket and folded tightly into the shape of a tri-cornered hat. This was the first memorial service I’ve been to with the presence of the American military. It was powerfully moving to say the least.

There was a gentle breeze that made the wind chimes in a neighboring tree make their music. My eyes roamed around to see the faces of loved ones of family and friends. Friends of my family’s who have come to each of my grandparents’ services the past four years to support and love on us even though we haven’t lived in El Paso for eight years. Never wavering, lifetime friends. I wonder if there was something about the moment that Brennan knew was sacred. He stood with me silently for awhile and then got passed to Matt. Then he landed in the arms of a precious man who buried his wife a couple of years ago and his eldest son this past May. Despite the overwhelming, crushing waves of grief this man has endured, he came. He came to my grandfather’s service standing by us and gracefully embraced my son, walking him through the trees, pointing to this and that. Oh, what the heavens declare in moments like these!

We said ‘goodbye’ that day to Papa. He was the last of my grandparents and the only one of them who was able to meet Brennan. He is with Jesus now. As are the others we have mourned the loss of the past four years: Cita, Gaga, Becca and Robert. It was a time to say ‘goodbye’ to the season of my life filled with the presence and gift of grandparents. Their legacy of love, their faith in Jesus, endurance, good humor, and love for things like gardening, cooking, hospitality, reading, dancing, beauty, and the Southwest lives on.

I’m not sure when I’ll make it back to El Paso again. I’m sure the time will come around when I hover over that expansive desert gripping the seat as the landing gear is lowered. But in the meantime, I will revel in the cherished memories I hold in my treasure box from that season of my life, my childhood. And although painful, I will embrace the parts of the treasure box that hurt, that are stained by tears of grief. Because ultimately, that treasure box is sealed with an overflow of thanksgiving. 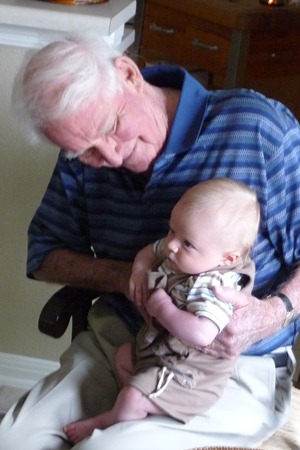 To the loved ones of El Paso, whom I grew up with and have stood by my family faithfully through the peaks and valleys of life, I am forever grateful for you. You are deeply loved.

That was beautiful Meg. I can relate to so many of those feelings and scenes from the past few years. Holding your own child, yet feeling like a child yourself mourning such a loss. Also, how powerful the Body of Christ is in those sacred moments. And, of course, I always enjoy hearing you write of your EP!!

I LOVE your memories of telling your Papa about expecting a baby. I still remember the look on my Papa's face when we announced that we were expecting Nathan. He was so proud to be expecting his first filipino great-grandson to add to his beautiful rainbow of grandchildren and great-grandchildren. And I vividly remember standing with my 10 month old Nathan at my Papa's graveside telling him how Papa Gus had run the race well. I cherish the picture I have of my Papa and Nathan on Nathan's day of birth. You're making this Mama cry this morning, Meg. But tears of joy for sure! Praise God for these wonderful people who have gone before us!

Oh! This brought tears to my eyes!

Meggie...I loved reading your personal account and reflection of El Paso, family, friends, and especially Papa. I, too, was so moved by the military presence, our country's flag, and the solemn playing of taps...it was a sacred moment; one that made me so grateful for those who have served as Papa did. Whether it was humility or the pain of rememberance, he never really spoke of it. I know he was honored that day, as he should have been; and I was proud of him. Love, Daddy

Oh Meg, I am crying as well as I read this post. It was beautifully written and so utterly heartfelt. I miss my grandparents terribly, but like you, am so thankful for their amazing legacy and the gift of having them as part of my life.

i didn't think i was going to cry. and then i did. it is always a treasure to be with you. in good times and hard. it's fun to read and know that so many of these memories are my memories now too!

Hugs to you sweetie. What beautiful memories, thanks for sharing.

This was just SO beautifully written!!!! Brought tears to my eyes!

Meggie, it was so neat to read your thoughts and memories because you're right, there are so many wonderful ones. Even the ones in which we said good bye. I love you very much.

Mac
(glad I read this one and didn't just look for pictures of Brennan!)