Good evening, dear Internet peeps! I’m curious, who of you have not had a good dose of winter this week? Anyone? Even here in Austin, Texas, we’ve had the artic blast affect us all week. We’ve been sick this week, too, so it has helped alleviate the stir-crazy feelings. Our couch has a permanent imprint of our bodies, and I don’t want to admit how many hours of movies we’ve watched. I have, however, reveled in the sweet fragrance of my son as I’ve held him for many hours, even helping him get through naps because the fever and coughing were rocking his little body off its norm.

Last night, we received a beautiful 1/2 inch dusting of the fluffy white stuff. It’s our once-a-year joy: freezing cold weather with precipitation that brings the busyness of life to a stand-still. 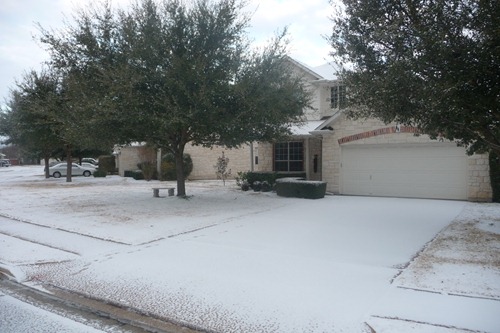 Brennan is not a winter-lover. Unlike his parents who relish some snow and winter weather, Brennan complains about the cold. I guess he’s a Texas boy at heart. We tried to put mittens on him and he hid them behind a door. He didn’t want a hat. And he most certainly did not want to be let down in the snow. The same thing happened in Virginia over Christmas. It was only until we brought his truck outside that he endured sitting in it for awhile. Molly, on the other hand, was a frisky puppy and loved playing and trying to eat the snow. Eventually, Brennan got bored and too cold, so Matt and I did what any understanding parent would do. We put him inside to play with some toys while Matt and I continued enjoying playing with our puppy, throwing her stick and sending snow balls her way. Don’t worry, we continually checked on him and didn’t stay out too long. I think Molly liked the special attention. 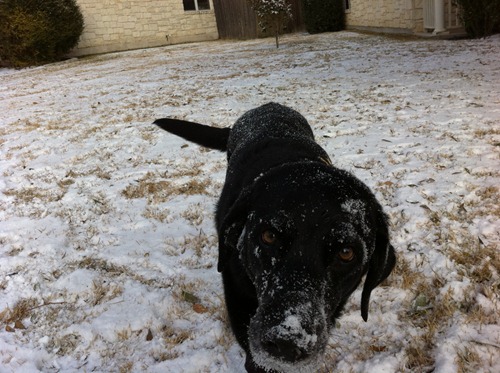 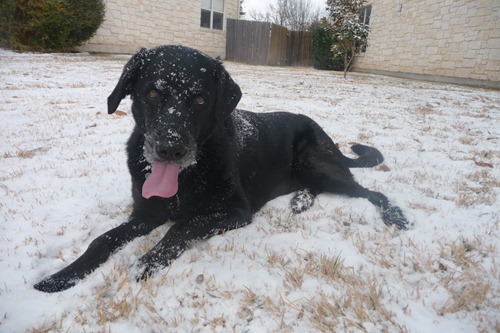 Here’s a short video that captures the opposite nature of our children:

What was the other part of my title? Oh, yeah. Secrets revealed. 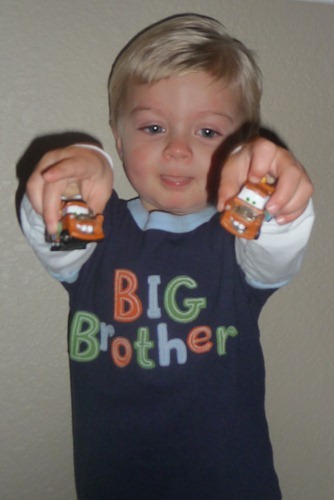 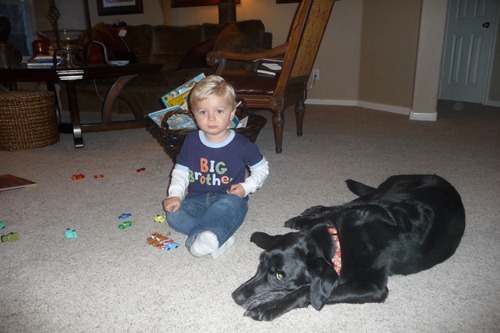 Yep, that’s right folks, we are going to have another baby! We are due August 2nd. I’m nearly 15 weeks along and everything is looking great with the baby so far. Brennan was known as “Polka” when he was in my tummy; the nickname for this precious one is “Skittles”. Here are a few notables if you’re interested: 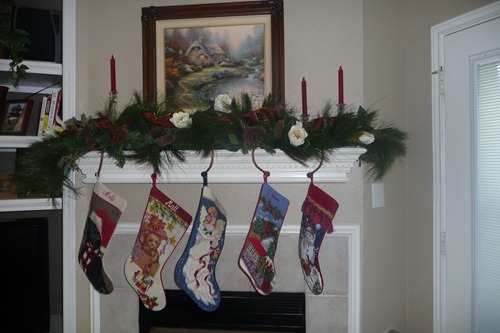 I don’t have a creative way to wrap up this post because it’s 9:30 and I am ready to snuggle into bed and fall fast, fast asleep. Well, at least until 2 a.m. At that point, you’ll find me in the bathroom.

That was a great post. As you know, I am thrilled for you. And I love Brennan's Big Brother shirt. We need to get a couple of cute ones in the next week or two! And, as an aside, there is an area in the country not experiencing winter. My Dad and Sheri are in Florida and it was 80 degrees two days ago - the warmest place in the country!

AWESOME!!!!!!!!!!!! I have been waiting for this news ever since some "tired" comments when you were talking about your Christmas! Congrats from us here! We are finally going to be an aunt and uncle...Rob's brother Collin and his beautiful wife Kerry are due August 9th...so it will be fun to follow both your progress! Lots of love from us!

I could not be more excited for you! I cant believe I haven't gotten to see you since the big announcement! :( great info here though! and Brennen, you will be a fabulous big brother! :)

Brennan looks so grown up in his big brother pictures! So excited for all of you!

I'm STILL grinning over this news!!!
What a beautiful miracle and gift! Praying for you all!!

I wish I had a sweet story for Ben finding out other than "he walked into the bathroom and saw the test." Hope you are feeling well!

Brennan is so cute in his little truck! Love it!

OMGoodness!!! I am behind on my blogs but I can't believe I missed this!!!! CONGRATS!!!!!!! I probably don't have to tell you that having a baby with a toddler is super challenging...so good luck!!!