Let Us Reacquaint Ourselves

I think a reacquaintance is in order. My name is Meghan. Or Meg. To my family and a few close friends, Meggie. To a couple of Australians, Meggles. To another friend, Megs. To my Momma, Pumpkin Face or Angel. To my Daddy, Meggie-Peg. I also hear the name, “Mommy” being called out a lot around this place by a person small enough to fit in a kitchen cabinet. 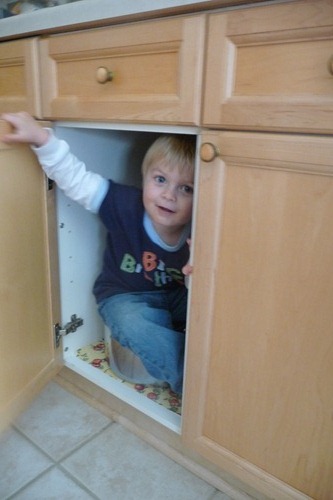 The big man of the household is working his cutie-pa-tooty off in what will be Brennan’s big boy room. We repainted the study a few weeks ago and moved the guest bed into that room to empty out the room for Brennan’s new one. Chris helped us put up a chair rail that Matt has been working on priming and painting, and over the next couple of weekends, we’ll tackle the painting of the walls. My momma is bustling working on other creative aspects of his room. In the meantime, our upstairs is a chaotic mess of furniture, toys, and mattresses. Speaking of my Momma, I want to recognize the blessing of her gift of creativity. She gave us a priceless treasure done by her hands that somehow, as her daughter, I have memorized how her hands look and feel and work. There’s nothing like Momma’s hands. Look what she painted and gave to us for Brennan’s birthday!

This was the original picture, taken when Brennan was about five months old in June of 2009. 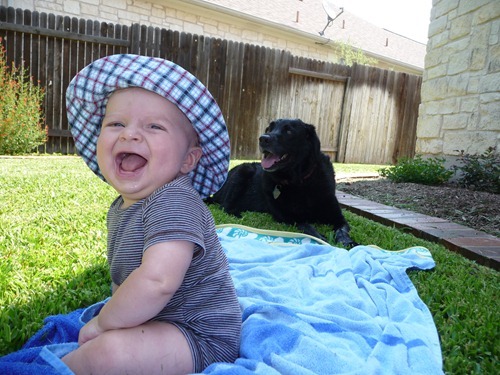 If I haven’t been running around after an energetic two-year old, cooking, cleaning up the peanut butter schmeers on the table and chairs, passed out on the couch, caring for a boy who was sick for two weeks with high fever and severe diarrhea, sighing over the amount of dog hair in our home, standing aghast at the amount of dust building up because it’s been months and months since I’ve dusted, or attempting to tackle seven loads of laundry that I keep putting off for days, I’ve been doing either of the following:

A little bit more about each of those. First, reading. Since receiving a Kindle from my beloved for Christmas (which was a huge surprise to me), I’ve had a renewed love of reading and have put my nose to the books. Life seems kinda tough at the moment, in general, so I’m finding great reprieve getting lost in novels. Since January, I’ve read Revenge of the Spellmans (the third book in a series of four by Lisa Lutz), As Sure as the Dawn (final book in the Mark of the Lion trilogy by Francine Rivers), and The Book Thief by Markus Zusak. I highly recommend each one for different reasons! Even while I prefer novels these days, I still want to mix it up a bit, so I’m currently reading Ann Voskamp’s One Thousand Gifts: A Dare to Live Fully Right Where You Are, which has been hugely challenging and eye-opening as a lot of the clouds that have been covering my soul lately seem to be parting, ever so slowly. The bright, cloudless Texas spring skies are also helping with that as well.

Secondly, the Project Life albums. Personally, I love keeping photos organized but don’t have time to do the old-fashioned scrapbooking. Becky Higgins’ Project Life albums have been the perfect match for me. I had a couple of months from 2010 to catch up on, plus I was able to start a new 2011 album. In addition, I’m using another album for Skittles’ baby book which I’ve caught up on to this day. And I’ll tell you what: it feels good! Now I just need to get our home back in order.

While working on the albums, I’ve discovered Netflix’s “Watch Instantly” feature that has The Cosby Show and The Dick Van Dyke Show. I now have a better understanding (and appreciation) for my hubby’s sense of humor as he’s a perfect blend of Bill and Dick!

Little Skittles. Precious Skittles. I’m 18 weeks today and am feeling much better than I did the past few months. In fact, I’m rejoicing that the last two weeks have had some semblance of ‘normalcy’ since Thanksgiving! Skittles is moving more and more and causing me a bit of insomnia and a great deal of ultra-sensitive gag reflexes! Did any of you experience that? It’s the weirdest thing! I can’t brush my teeth or cough without feeling like I’m gagging, and sometimes, it causes me to randomly vomit. It’s bizarre. For those of you who like belly pics, this was taken a couple of days ago. If you aren’t interested, just keep scrolling down <grin>. My hubby, bless his heart, finds himself unfortunately in the role of taking the pictures once again, and I am a pretty picky belly picture taker. On Sunday, I think we took about seven or eight pictures before I was satisfied. 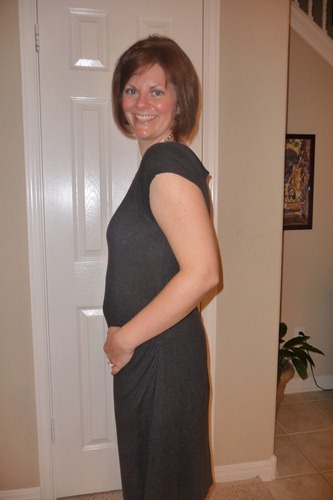 This handsome buckaroo keeps me on my toes and keeps me laughing (most of the time…the other times I’m about ready to pull my hair out or pass out from exhaustion). He’s a solid climber! Just this past weekend he mastered climbing up the slide from the bottom. Not sure if that’s a good thing. But it’s definitely a boy thing. He’s playing a lot more pretend games (like grocery store), and is inseparable from any of the following items that get interchanged every week or so: Lightning McQueen, Thomas the Train, Lambie (his stuffed lamb that Gaga gave him), a toy dolphin, Mickey Mouse, If You Give a Cat a Cupcake book, or pieces of his Cars puzzle. 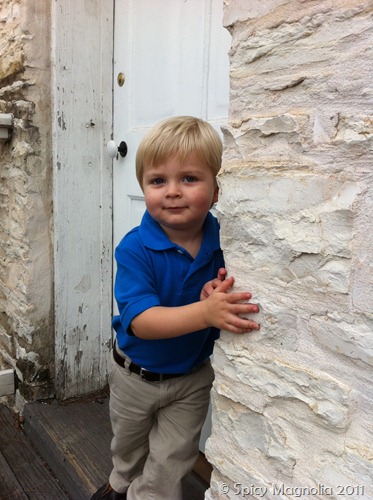 Since Sunday, he’s been carrying around the following two pictures of Pops and Mees that he pulled from my stack of photos I had developed. Pops and Mees have eaten every meal with us, gone everywhere with us, and slept next to Brennan for naps and bedtime. 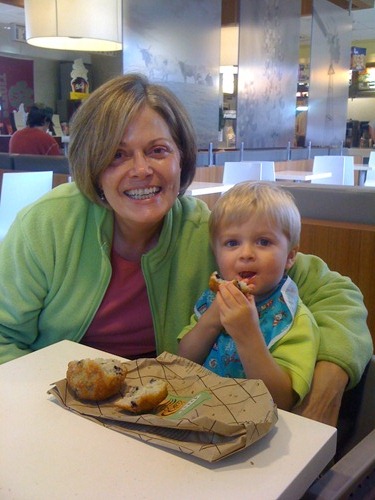 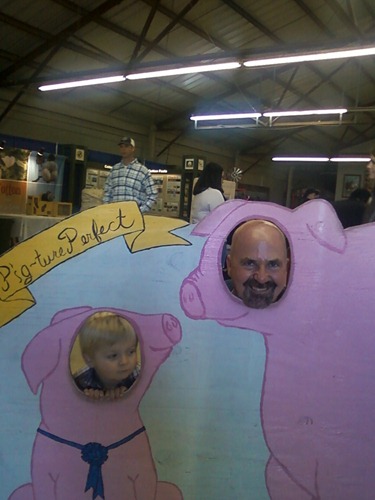 To the delight of my heart, he started singing Jesus Loves Me on his own yesterday while playing trains. And for the first time in his whole two years of life, it’s not very pleasant to drop him off in the church nursery.

Over the last month, the tyke has ventured to San Antonio for a weekend getaway with Pops and Mees by himself where he got spoiled rotten with yummy food, playing with three puppies, and adventures at the stock show. Then the weekend after that, he had a journey up to North Texas to celebrate our good buddy, Harrison’s, fifth birthday. Matt took him there for the weekend, so I had a lovely, quiet weekend at home and attempted my first-ever sewing project with my friend Emily! We made tool belts for our boys and it was a blast! 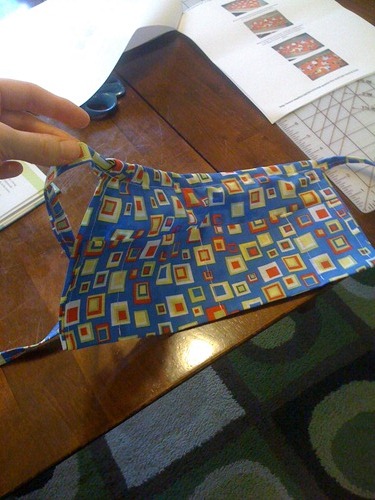 I’ve loved the opportunity of reintroducing myself to y’all. I hope to not be as much of a stranger around these parts! And if you’d kindly oblige me, I’d like to know who my visitors are these days, just for fun. I’d love to know who you are and where you’re from and what’s been the best thing you’ve eaten today. Not best as in best for you, but best as in yummy best <grin>. I’ll start: I’m Meghan from Austin, Texas and I ate a whole pint of chocolate pudding today, and don’t regret one bite!

Thanks for stopping by, and I hope you have a lovely afternoon!

Posted at 04:35 PM in Book Worm, Daily Spice of Life, Family, Foodie, For the Love of Travel, Joys of Parenthood, Just for Fun, T.V. and Movie Escapes | Permalink | Comments (14)

I am so excited for you, I didn't know about Skittles. Wahoo! I know I have been on hiatus lately too. I love the list of your nick names I get some of the same. Blessings Mama!

I love the painting your mom created. I had no idea she had that talent! I love your photo of Brennan in the blue polo. That's precious.

you are too cute! :) I am Cassie, I am from Round Rock, across the street, ha! and I ate too many chocolate chips to count. What a beautiful painting from your mom- that is so special! love your lil growing belly- you look so pretty too! and yes, I did the whole random vomit thing too. ugh- especially when brushing teeth though, which kinda kills the whole process. excited that skittles is moving and saying hi to you though! And I love the Cosby show! Grew up on Bill Cosby humor. AND I love the tool belt!! Way to Sew! :) super cute! you will have to teach me!

Hi, I'm your momma and I ate a cupcake today from Cupcake Couture in San Antonio. It was one of my students birthday and he was kind enough to share one with me....very, very yummy....top-heavy with icing! It's good to have you back! You've been missed!

You look fantastic! And I am in AWE of your Momma's painting!

I've missed you!! You look beautiful!!!

Meg, that painting is so amazing!! What a treasure!

You look great--you sure don't have a big bump yet. Mine is really starting to grow these last couple weeks :)

I'm in Dallas eating nothing very interesting, but I ate the best, best tableside guacamole in Scottsdale last weekend. I can't stop thinking about it!

Hi I am Katie...Stillwater, MN cold and snowy! Good thing I just ordered Pizza Hut for dinner since hubby is out of town this week...1/2 veggie for me and 1/2 pepperoni for the kids (all 4 of them)! Love the update! Can't wait for the babe! I am looking into doing something with our pics so I will check out the link.

It's good hearing from you! Brennan is so precious and you look great! If you think things are crazy now, wait until your next little one arrives! I had the gag reflex too, esp. while brushing my teeth. I found using kid's flavored toothpaste was easier than the adult minty stuff. Hope things continue to go smoothly!

Congrats--didn't realize your second was on the way. You, Kelly, and Sara have been close on the same schedule!

Loved this update. Brennen is looking more like a little boy than a toddler the same as Aaron.

Hope the gagging stops soon. Yeah, I can relate, although it's been almost 36 years ago when I was pregnant with Sara. Some things you don't forget.

Oh and I love the picture your mom did! How did she do that--what media is it?

Yay! How fun to have you back! I'm Kelly from Ruston ,LA. Otherwise known as BraydenandBodiesmama. I did know about skittles because I've seen your tweets... and I knew right away the second time I was pregnant because breath mints made me throw up, so I get the toothpaste issue! You may not remember this but we sat next to each other for part of the Siesta gathering in Houston, so I met you last year. Anyway, congrats on the newest addition! And my lovely hubby brought my chickfila to school for lunch (I'm a teacher) so that was my treat for the day!

julie. from arlington. for some reason i love being "from VA" Mac clearly doesn't claim it. i had a cheeseburger today, which is pretty representative of my life, but right now i'm starving so it doesn't seem worth sharing. perhaps i will go eat something and then post again. you still look too skinny to be pregnant! though i'm SUPER excited about this pretend baby of yours. and i can't get over that amazing painting. seeing as i've only known your mom for 7 years? this is definitely a talent that i just recently came upon while visiting and just am in awe! we are totally related. and she is practically famous! love!