I’m typing this post out despite the bad Internet connection we have, hoping it will fix itself since my computer genius husband is busy with his day job. Also, I put Brennan down for a nap forty-five minutes ago, assured it would be a lengthy one because the dude woke up at 5:45 a.m.! Outrageous! He’s still awake, next to the box of blueberry muffin mix we bought at the store today to make for breakfast in the morning. He LOVES muffins and took that box with us to Hobby Lobby and insisted he nap with it as well. (UPDATE: It also joined us at the dinner table.)

His other obsession is with Thomas the Train. We bought the Melissa and Doug set for him for Christmas and have added a couple of signature Thomas pieces along the way. Since the play a couple of weeks ago, he likes to reenact a scene where Percy falls into a mine shaft covered by rocks and Thomas comes to his rescue. Take a look:

For the Love of Thomas from Meg @ Spicy Magnolia on Vimeo.

Matt wants me to mention that all the footage and editing was done on his iPhone <grin>.

For the longest time during this pregnancy, people kept telling me I barely looked pregnant. Really?! I’ve felt huge. The following picture was taken May 1st, two days shy of 27 weeks… 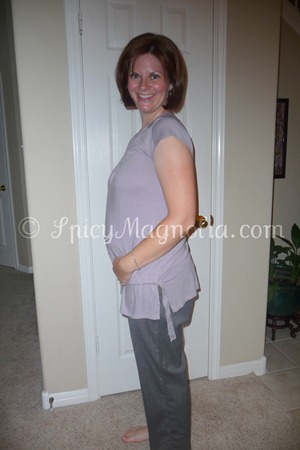 And now, it is quite apparent I am expecting! Skittles has popped out! We took this yesterday at nearly 33 weeks: 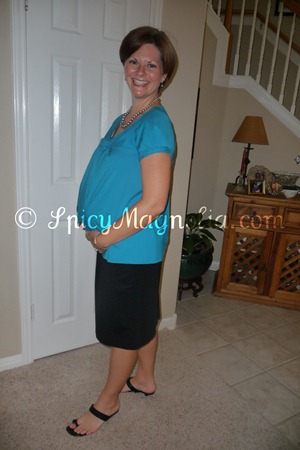 Officially on task mode, we are working through our to-do list diligently. But during the day, I’m trying super-duper hard to turn off my manic beaver personality and focus on the little boy who is still not sleeping! At least he’s in his room content.

Matt and I thought of a gift idea for Brennan to give his baby sister when we’re in the hospital and a fun surprise for Brennan from Skittles. Brennan and I trekked to “Build a Bear” for the first time to make a special-something for Skittles. My precious boy picked out the Dachshund puppy, helped stuff the dog with all the soft fluff, kissed the plush heart and put it in the puppy’s tummy before it was sewn up, and gave it a good bath. We even have a birth certificate for “Puppy”.

Amazingly, “Puppy” is the same kind of dog I picked out for my brother when he was a toddler sick in the hospital, and to this day we scuffle over who’s Rangie’s rightful owner. I had no say in the matter over what dog Brennan picked. I was hoping for a teddy bear, a different dog, or even a bunny. But he was set on it. When the memory of Rangie suddenly came back, it made my heart soar. 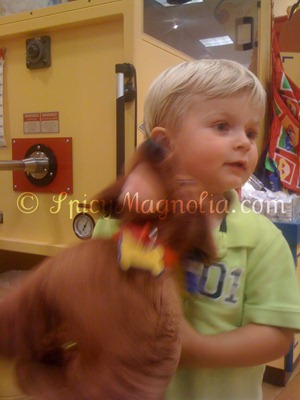 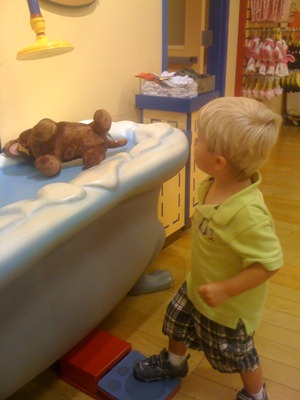 He was so proud of his puppy house and carried it through the entire mall. 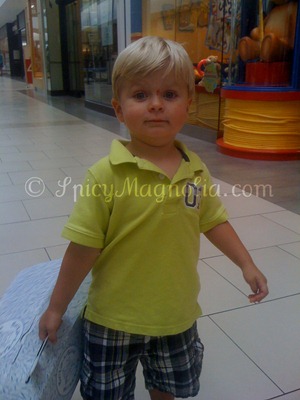 I’m not sure how it will go actually handing over “Puppy” to Skittles, but when people ask him who that is for, he replies, “Baby Skittles”. So as much as he can right now, he understands it’s a gift <grin>, and we’ll try to keep the reminders coming.

{It's now almost bedtime as I wrap this post up}. It took five minutes for my computer-fix-it man to get the Internet working again. Hooray! And Brennan had a very short nap. Now I just need to see if I can get myself up from the couch gracefully. Wish me luck!

That video is way cute! Made us smile. Love the music, too. Good 2 year old music. What happened to his eye!!! Goodness!

Kids are so funny! Napping with a Blueberry muffin mix is priceless.

You look great! Love the dachshund puppy, I have a real, live dachshund!

Love the Build-A-Bear idea! So cute. He cracks me up with the muffin mix:)

Oh, the smiles, laughter and joy that this blog brought! From remembering Rangie to the pictures of your tummy to the video...just what I needed! Matt, you could go into film production in Hollywood! What treasures you have with your videos. Too bad Panera's doesn't make muffin mix! :)

He had his first bad spill down the stairs. :( I didn't see what happened, but he must have scraped it on the wood banister or molding. It's not very pretty. Has Luke enjoyed his train set?