The Man of the Hour

First, congratulations to Sara on being the randomly selected winner of Marla Taviano’s new book!

I think we spoiled Matt for Father’s Day; at least that was our aim. We started the weekend off with a splash by texting Matt to meet us at the neighborhood pool, where we made him perform his famous dolphin exhibition. We’ve gotta get our boy to Sea World some day real soon! We packed a dinner picnic and ate by the pool, which we hope to do more often this summer. After Brennan went to sleep, Matt and I watched The King’s Speech. While it was the third time I saw it, it was Matt’s first. It never gets old.

I think Matt was most excited about sleeping in on Saturday. The rest of our clan went on a walk, where Molly nearly was hit by an oncoming car when she pulled so hard trying to see another dog her leash slipped out of my hand. I burst into tears out of gratefulness she was ok and an overwhelming sense of nerves.

Brennan and I picked up a chai latte and Rudy’s breakfast tacos for the man of the hour and adorned him with his “Daddy” crown Brennan made with specially picked “Thomas”, “Lightning McQueen”, and “Nemo” stickers. 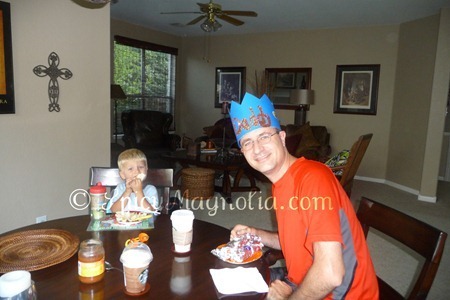 We spent some time at the outlet mall trying to find some new sandals for Matt and new flip-flops for me as both of our pairs went caput. It was hot. I was uncomfortable. And grumpy. And well, it wasn’t the most pleasant of outings for us, but we sat in the cool car for awhile, exhibiting to Brennan how adults need to work out their attitude issues, too.

I spent most of the afternoon plopped on the couch, except for when I inspected Matt’s work cleaning a couple of ceiling vents we recently discovered were appallingly infested with layers and layers of dust. He got them spick-n-span, and my nesting instinct that is in full gear was put at ease. Then the boys headed off to Brennan’s first baseball game to see the Round Rock Express! I benefitted from a quiet night, chatting away with my friend, Corrie, and working through our to-do list. 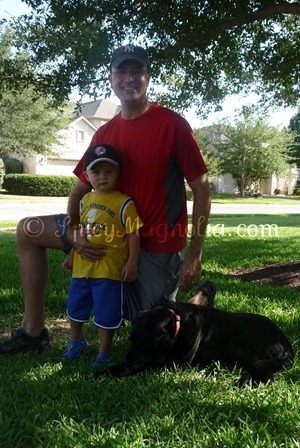 The boys had a blast, and it’s quite obvious by their glowing faces. 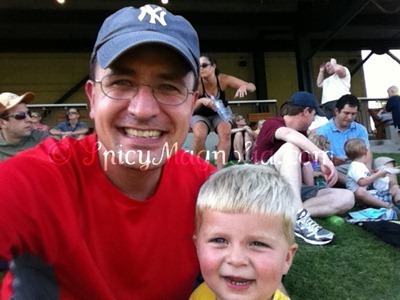 The boy really enjoys himself a classic corndog. And he had his first nibbles of “Cracker Jacks”. 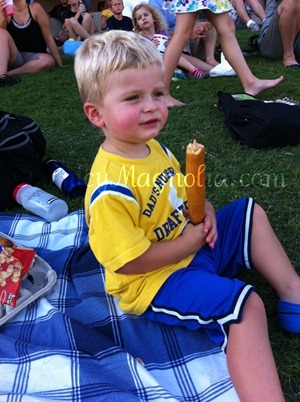 These are the “chickens” Brennan excitedly scurried in to tell me about after the game and has been talking about ever since. 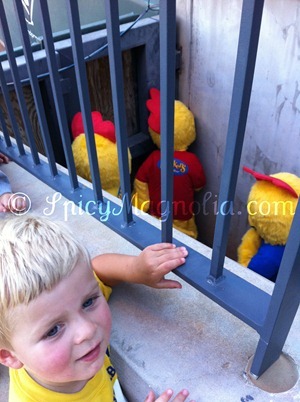 I was surprised to see how comfortable he was standing next to this big mascot sign, but maybe he was more drawn to it because it’s a dog. Or maybe he’s telling us he’s ready to hit Disney World <grin>. 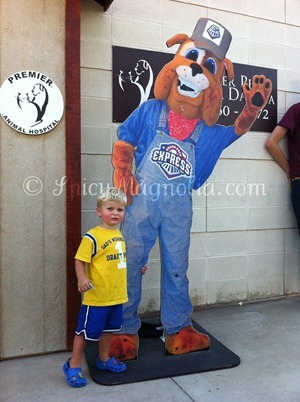 On Sunday morning, Brennan started delving into Matt’s Father’s Day present and couldn’t wait for him to open it. One of his gifts included a frame that held the following three pictures spelling out “Dad” that we took during play group. 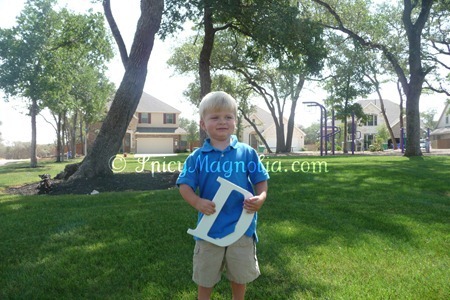 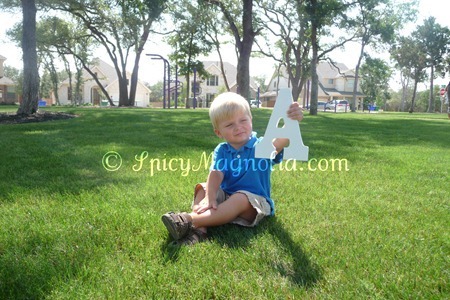 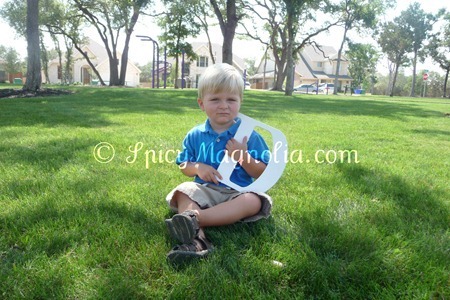 The boys and Molly went on a walk and to the park while I got started on Matt’s Father’s Day dinner: his favorite, Chicken Parmesan. We enjoyed another relaxing day and treated ourselves to a first-time visit to Torchy’s Tacos. Y’all, I’m still fantasizing about those tacos! I can’t wait to go back and get another round of chips and salsa and a “trashy” version (with chile con queso) of “The Trailer Park” tacos!

Nap time! One of my favorite parts of the day <grin>. Matt was most looking forward to this because he planned in advance to nap with Brennan in his big boy bed. So for two hours, they snuggled and slept together. I went upstairs to wake them and they had their arms in the same position above their heads. More playtime, wrestling (a new favorite thing to do of Brennan’s), and then eating. Savoring bites of garlic bread, a large salad, and the Chicken Parmesan.

We three are a blessed bunch with the fathers in our lives. Between my Daddy, Matt’s dad, and Matt, they make up a small group of godly men, husbands, and fathers, who have marked the world and the people they meet with their character that is above reproach. They are full of integrity and serve their families honorably. Oh, and they are loads of fun and laughs! We have very good reason to celebrate their lives!

YAY! But mostly I am just thankful for the prayers. Your babies are blessed with a wonderful father!

Continuing to pray! And I just sent your email address to Marla. She'll contact you soon with the link to her book. Love to you!

So sweet! I was wondering, do you have any more Pinterest invitations? I'd love one if you do.

Hi, Linds! Yes, I still have an invite and just sent one to you. You might want to make sure it doesn't end up in your spam folder. If you don't get it, let me know. So fun that you'll be on there...I think you'll love it!!

What a fun Father's Day weekend--and love the crown! What did Brennan's shirt say?

Hi, Ruth! It says "Dad's Number One Draft Pick." It's actually the only outfit that Matt knows what shorts pairs with what shirt. :) And well, it was fitting for the occasion.

This is only a preview. Your comment has not yet been posted.

The letters and numbers you entered did not match the image. Please try again.

As a final step before posting your comment, enter the letters and numbers you see in the image below. This prevents automated programs from posting comments.

Having trouble reading this image? View an alternate.

(Name is required. Email address will not be displayed with the comment.)