How the Mice Played

The weekend highlight was the pumpkin patch at the Elgin Christmas Tree Farm that I took the kiddos to on Saturday morning. The high was supposed to be 90 degrees, which put a damper on the whole Fall ambiance, but the clouds and few sprinkles worked in our favor.

It was a bit of a balancing act doing it by myself, but Kensington was a trooper coming along for the ride as I trucked her in the Bjorn. Brennan was patient as we took time to feed her. And we only had one minimal meltdown when in line to pay for one last horse ride, I discovered I lost my last $20 somewhere and Brennan wasn’t going to be able to stroll around on top of that magnificent beast he’s fallen love with. Thankfully, either I left it at the pay window where I got the change or some blessed saint kindly turned in the money they saw blowing across the driest Texas straw grass you ever set foot on.

The main event for Brennan at the Pumpkin Patch was the pony ride. Or rather, the horse ride. It was the first and only animal he pet, making regular visits throughout our morning: 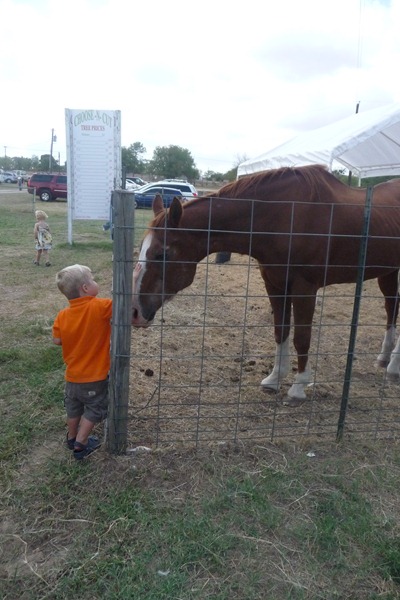 When he found out he could ride one, he asked about it incessantly while I fed Kensie. A bit unsure if he’d actually get on, I braced myself for tears. Instead, just the opposite occurred. Slightly in shock, I watched my son take his ticket to the horse leader and ask specifically for a “big horse”. Without a second thought or even a slight glance back at his Momma, that boy of mine climbed on Barbie, the biggest horse out there. No fear. No intimidation.

And off he went. 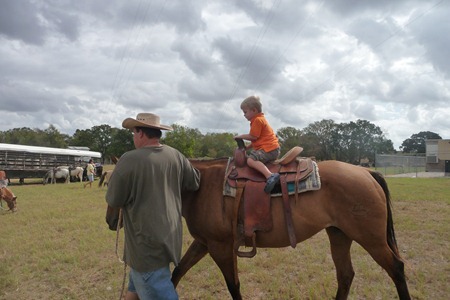 It must have been his watching of the race scenes in Secretariat (that he comically reenacts) or how we’ve told him that Uncle Mac had a horse and was an avid rider that spurred him on. I don’t know, but my Daddy texted this when I told him about our budding equestrian: “It’s all over. In two or three years, you’ll be buying a horse.” I’m watching my childhood with my brother replay before my very eyes. Full circle moment. All I needed was a ribbon to hand to my son, just like I handed to Mac during his horse shows.

We had a blast the rest of the time playing on the playground; making a buddy on the tractor hayride that Brennan followed through the corn maze… 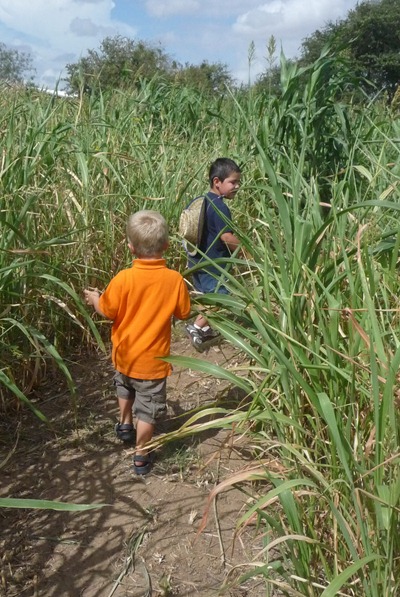 …watching a Border Collie successfully herd sheep; eating hotdogs listening to live Blue Grass music, and having no qualms kissing each other with ketchup face… 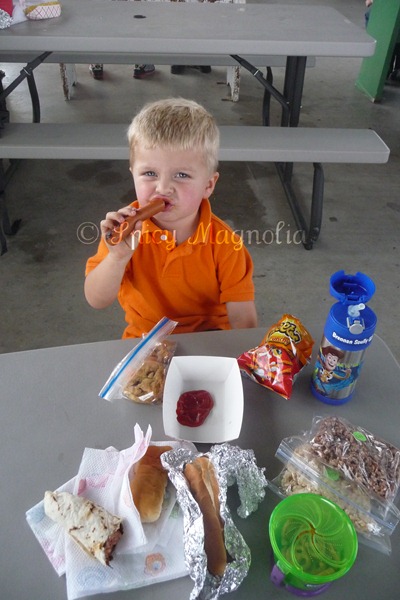 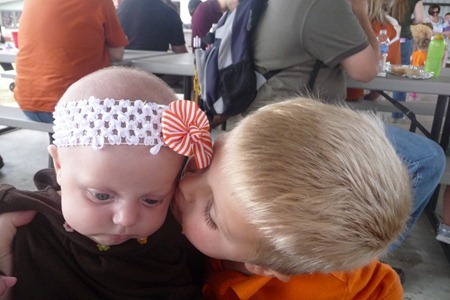 …picking out a pumpkin; and riding a big horse one last time. 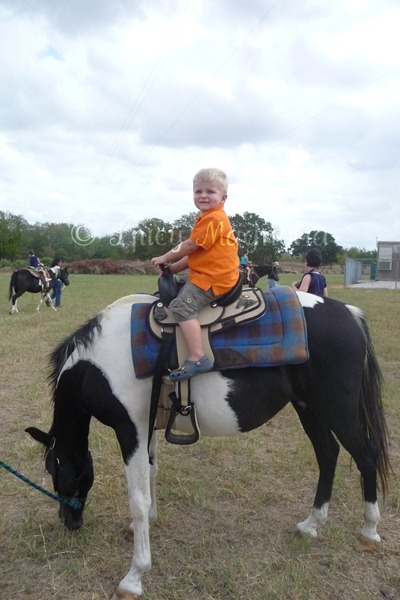 This is the only picture I have of the three of us. The kids’ faces crack me up. 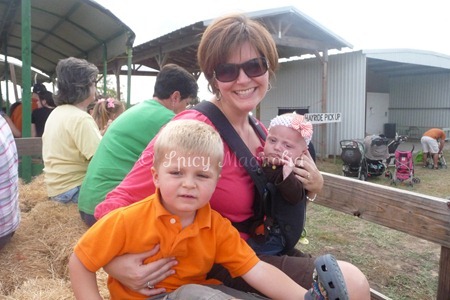 And a pumpkin patch wouldn’t be a complete visit without a couple of patch pictures. 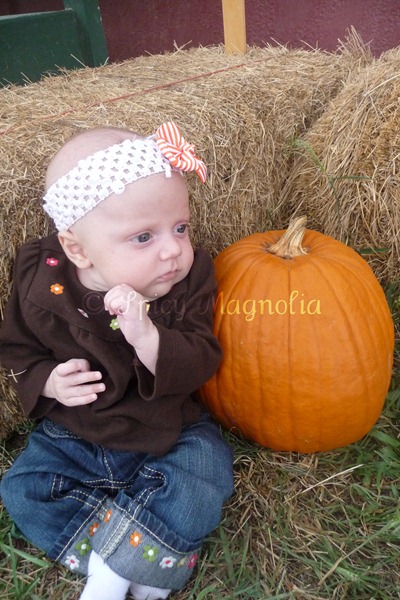 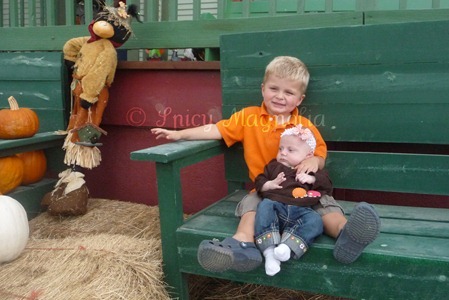 Jumping to Sunday morning, Brennan saw the outfit I picked out for Kensington and asked, “Kensie going to be a lady bug today?”

Well, I guess she is: 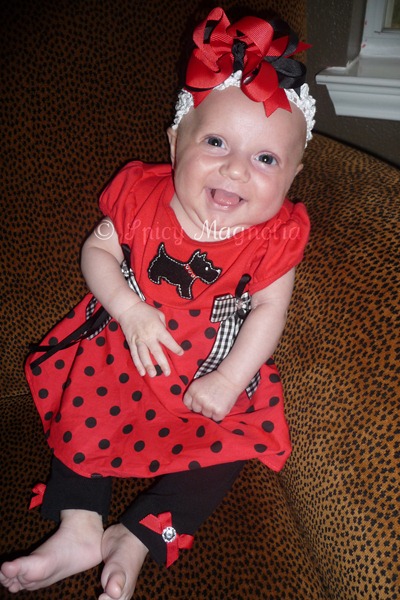 The other highlight for me was attending a Mother’s Blessing Sunday afternoon. A number of ladies from our church lovingly prepared a time to pray over and encourage moms of the newest born babies in our congregation. It was a special and very sweet time.

Another praise about one of my scatterbrained moments these days: a momma had an extra bottle on hand because I ran out the door without one. I was probably too preoccupied trying to get some mother-daughter pictures of us before our special event. 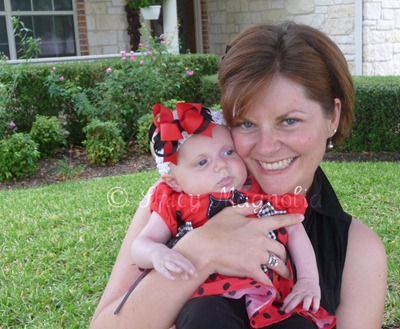 I have to put this one in here for kicks because the expression is comical. 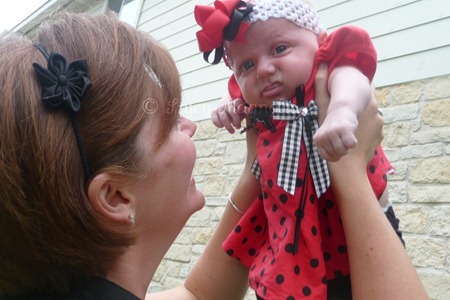 But Kensington would want me to end on this one. 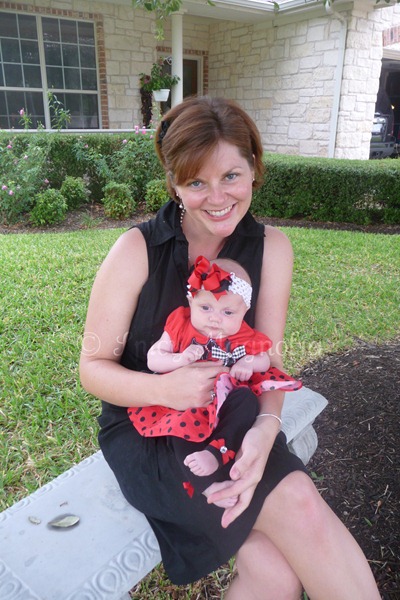 We mice are oddities. We had a lot of fun together, but we’re overjoyed the cat is back. The momma mouse especially!

Looks like you guys had a blast - I love the pumpkin patch! Good for you for going out there with both kids and handling it yourself! Happy Fall!

looks so fun!! kudos to you mom for never being intimidated by a big day on your own! :) I was behind on my blog reading and had no idea you were by yourself or we would have "checked in on ya" :) sorry! way to go horse rider B!! impressive! and I love all the sweet "lady bug" pictures!

You look great! Love your hair!

I have LOVED these past blogs....keep writing til your hearts content...it etches the passing time in my mind, as well. Gaga used to say that the older you get the faster time flies...oh, how true that is...what is a month, is a fleeting moment in my time. I am so grateful for your writings and pictures...they are gift to all your family and friends...both near and far...thank you.
P.S. I am going to go through Mac's life book and see his pictures when he first climbed up on a horse, as well as standing outside the stall petting one....SO similar. :)