Time is Whizzing and Darting

Can time possibly whiz by any faster than it is already? Wait. Don’t answer that question. I don’t want to know the answer. I dread the answer.

In my lap is a three month old doll. It seems I just completed her two-month post and now she’s already two weeks past three months. I can’t keep up. Surely some genius is working on a ‘take your time’ machine that stretches time, right? 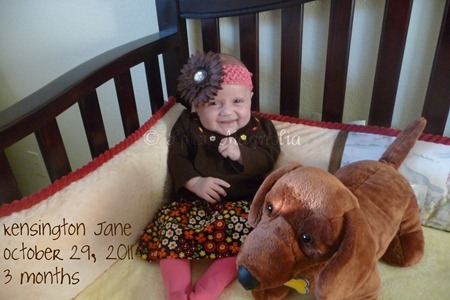 Apparently, I desperately need a ‘take your time’ machine because those first two paragraphs were written a few weeks ago! Shortly after penning them, the little girl decided she had enough of sitting quietly in Starbucks with me so we moved onto a fresher spot, only to leave me deciding to combine her three and four month updates because I was already so behind and lacking a decent moment to write.

A year ago this past Monday we found out we were pregnant with this joy. She is a delight, a very content, smiley baby who seems to only cry when she’s really tired or when she’s in a room by herself when I run upstairs to get something and Brennan follows, for example. Oh, yeah, and tummy time. She does not like to be left alone, and out of all four of us, it is foreseen that she will be the extrovert. Squealing, chattering, and cooing are her fortes. She will talk nonstop for a solid 10+ minutes (I have a video to prove it). 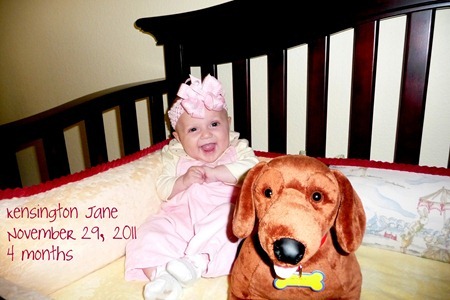 Some of the firsts she experienced since her 2-month post: swimming (she was just as amused at Brennan’s splashing her as he was); got to meet Uncle Mac & Aunt Julie; a first road trip to Dallas for my cousin’s wedding; our first official family vacation to San Antonio/Sea World (she’s a great traveler like her brother); Halloween; a first date with Daddy; first jacket-wearing cool day; Thanksgiving; rolling from her tummy to her back (she’s only done it once and it commenced Brennan’s rolling around to show her how it’s done), and is very close to rolling from her back to her tummy; her first cold (boo).

Vividly I remember when and where I was with Brennan when I told him the Gospel for the first time after I saw him staring at the cross on our kitchen wall (he was about the same age as Kensington now). It was less pressure on me to feel like I had to share it entirely on a kid’s level because he was just a few months old, and I trust the Holy Spirit could penetrate his heart with it despite his age. Sitting under a large oak tree one morning at Starbucks in October, I relayed it with joy and emotion to my Kensie Jane.

I have a knack for finding her ticklish spots which make her giggle. Matt, however, holds the record for making her laugh for the very first time simply because he was being goofy.

The girl tries to eat her whole fists. She prefers them to a paci. On the topic of eating, she’s become less messy and drooly while doing so.

She’s gotten so big and strong she graduated away from the swaddle and still sleeps 11-12 hours each night, which is amazing! We’re still working with a nap routine, which might prove to be difficult for the morning version. Thankfully, her afternoon naps are mostly consistent with the duration and timing of Brennan’s. She’s a snuggler and loves to be held, especially this week when she hasn’t been feeling well. And kisslets, oh this girl loves her some kisslets! It’s a sure-fire way to see some smiles.

She’s easily distracted while eating because she wants to follow Brennan’s every move; thus, you’ll see her bottle moving back and forth for twenty minutes while she turns her head this way and that. Brennan has had a lot of lessons on speaking kindly to his sister these last few weeks. Someone wisely told me that sibling issues won’t show up as clearly in the first couple of months after the new baby arrives but after three or four. That is probably not true for everyone, but it holds water in this home. Something in Brennan kicked in a few weeks ago when he must have realized, “Oh, she really is here to stay.” That said, he’s pretty sweet on “Mys sister,” and I pray they’d be blessed with a deep, joyous friendship.

She likes her Jumperoo and Johnny-Jumper though it looks like they’re swallowing her. Wearing 3-6 month clothes and some 6 month clothes, she’s growing like a weed. She weighs 14.1 pounds is 25.25 inches long (remaining in the 50th and 75th percentiles for weight and length, respectively). The rolls, the rolls on this child are fabulous <grin>.

She has two kinds of smiles I see regularly, each represented in the two pictures. One is more open-mouthed making her face round and the other one is when she crinkles her face and scrunches her eyes. It’s fun to get her in the morning because she’s smiley and excited to see us. Brennan usually likes to climb in the crib with her.

Brennan’s hair came in a lot faster than Kensington’s, but hers is a-comin’! From what we can tell so far, she will be a toe-head like her brother.

When Brennan is at his school, Kensington and I usually enjoy time together split at a nearby Starbucks and then a special corner we have hidden away at the church where Brennan goes to school. We’re pretty stoked to go pick up Brennan when the time rolls around.

She is my dutiful companion when I’m folding laundry, smiling at me or staring at the fan.

These children of mine, they are some of the tools God uses in my life to shape me, refining me to be more like Jesus. They also are such exquisitely made gifts in my life that make me all the more shout from the rooftops that God, He is good!

From the fullness of his grace we have all received one blessing after another. John 1:16 (NIV)

oh meggie....she is beyond beautiful! i can't wait to get my hands on her and eat those sweet cheeks!!! there is something about our precious girls that warm the deepest part of my heart.....then my boys just push that over the edge!! I LOVE OUR BABIES!!!!

Thank you for sharing those special moments between you and Kensie Jane and for letting me glimpse a little of your times together. Your children bless my heart and life beyond measure! I love the days when you blog!