There are five Reese’s Peanut Butter Cup wrappers sprawled out next to me on the couch. Evidence that the kids scored big time during their trick-or-treating last Wednesday and proof that I need to get the candy out of this house! I had such lofty plans of donating our leftover candy for homeless Christmas gifts or to send to troops. But since I haven’t had made time for that yet, I might just have to pull an emergency intervention and send the candy with Matt for the Dell break room.

May I introduce you to Spider Man and a beautiful flower that was hand-picked from our garden? It’s still in the mid-80s here in Texas, so it is conceivable to have such blooming beauties. 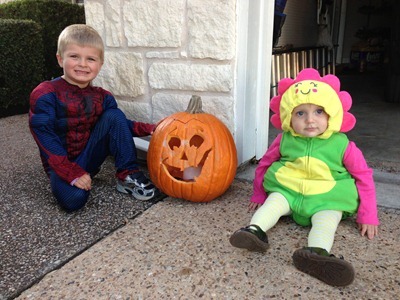 That pumpkin with no name has one snazzy smile. It is no longer with us after it succumbed to mold, bugs, and whatever other awful infestation occurs after being hollowed. But for the few days that it was with us, it made us smile that same crooked smile.

Our “no name” pumpkin likely originated in some large Texas field where it was privy to some of the strongest rays of sunlight to make it grow big and strong. Somewhere along the way, it managed to get a minor injury: it was flat-faced. But in the big scheme of pumpkin life, that ain’t too shabby. It was the cream of the crop for our little family when we picked it special out of the pumpkin patch. 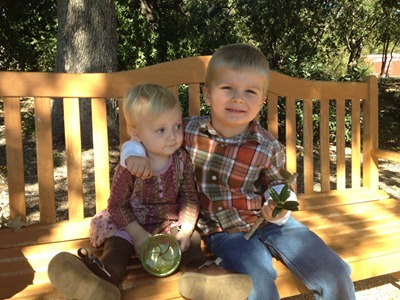 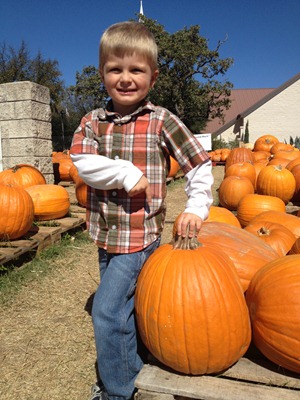 In the third grade, I wrote a short story called “The Sad Pumpkin” that was about a pumpkin discarded in the junk yard after never being picked at a store and “almost killed by a dump truck”. It was left to rot in the garbage dump alone. (It had a happy ending, but that’s not relevant for the moment.)

Still impacted by the memory of that story, we brought a few smaller pumpkin friends home with the “no name” pumpkin so he wouldn’t get lonely. Of his own choosing, Brennan wanted to carve a cross out of the tiniest pumpkin. It looks more like a plus sign. But being that it was my first pumpkin to carve on my own, I think it turned out mighty fine. “No name” pumpkin was spared his innards for another solid day. After that he yielded to the painful yet crowning glory of a pumpkin’s life: the ritual carving. Our “no name” pumpkin was carved by Matt with such precision and care, and had a number of excited kids surrounding it at the time of its demise that it knew it couldn’t get any better than that.

It became a neighborhood ceremony. But only one little person remained faithful. 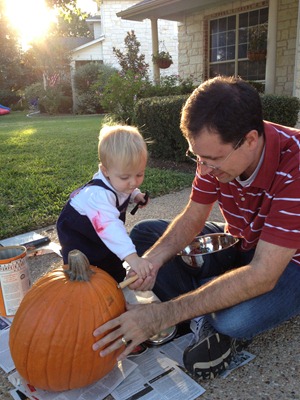 On the night of Halloween, we ventured to a retirement home where the kids scored full baskets of candy within ten minutes. I wasn’t prepared for tangible reminders of my Gaga, but what a joy it was to see those precious ones who quickly endeared themselves to my Spider Man and flower. 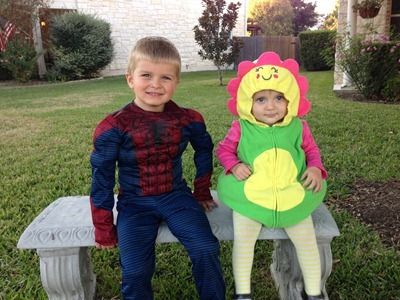 We bolted home to give out some candy and see our neighborhood buddies, and we had to light our pumpkins, too. 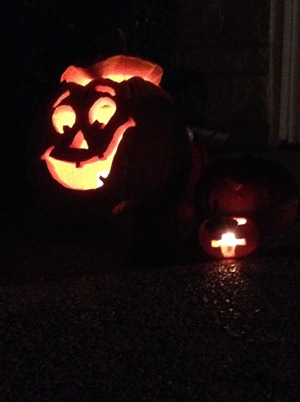 Here they are in all their pumpkin splendor.

Unlike the lonely, sad pumpkin in my third grade story, I hope deep down inside that somewhere in the garbage dump our “no name” pumpkin and our tiny light-bearing cross pumpkin are rotting away together.