Home Archives Profile Subscribe
Easter Blessings
One Blessing After Another

Christmas morning 1988 wasn’t the Christmas I’d laid in bed awake envisioning with anticipation the night before. Mid-morning Mac ran into Gaga’s kitchen with tears streaming down his face and his hand holding the back of his head. The next thing I knew, my parents swiftly loaded him into the car with blood soaked towels pressed up against an inches-long deep wound, and Mac's tears transformed into wails and screams. He and my cousin had been jumping on the couch and Mac fell backward landing perfectly on the sharp rim of the coffee table, cutting his head open. As I watched the car drive away from the large living room window, I instantly was sick to my stomach. The blood didn't make me queasy, but both the knowledge of my brother in pain and the unknown of what he was going through without me being there, put my stomach in all sorts of knotted contortions. For hours until he returned I laid on the bathroom floor next to the toilet. It was a memorable Christmas, of sorts.

Since then, I have on occasion felt that same bundle of nerves twist around in my stomach because of something Mac was going through. It usually strikes when I'm not with him but want to ever-so-badly be there. While wanting to be there to calm or help him, oddly,the reverse happens: he calms me.

So on Easter night, although so excited I could hardly stand it, I found myself once again knotted and twisted.

My brother was getting ready to see his babies.

And I so badly wanted to be there. To celebrate. To share in the moment. To cheer him on. And to be calmed. The nervous excitement of waiting on pins and needles while Julie delivered those precious babies she's carried for nine months was making my insides bounce and twist. (I recognize I have no legs to stand on talking about my insides as I’m writing about a birth <grin>!) Even after Mac texted with the announcement of their healthy births, I was awake most of the night awaiting more news and pictures.

We are ever so grateful these little ones remained tucked in the center of Julie held by God's hands for as long as they did. Together they totaled over 13 pounds and they didn't have to go into the NICU! Julie should be awarded something great in my book.

I am a doubly blessed aunt that I get to introduce Wynn Law and Mays "Maysie" DeLaddy! This man, one of my best friends, is a daddy. 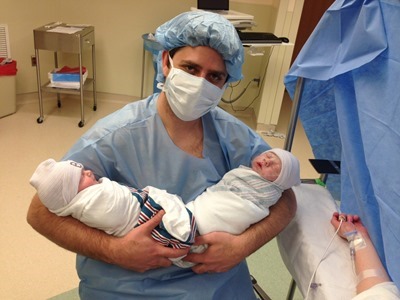 My parents flew up to meet their new grandbabies a few days later. I know I have nearly tipped over the edge to obnoxiousness for how much I text Mac asking for news and pictures. He might very well say I’ve already arrived. I have no shame. 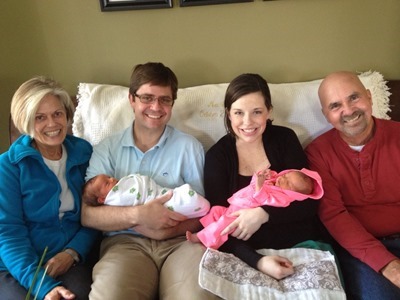 Popsie and Mees in heaven. 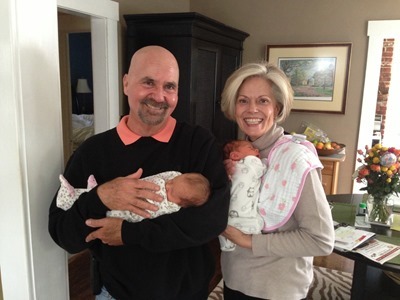 At two and a half weeks. Pure bundles of love! 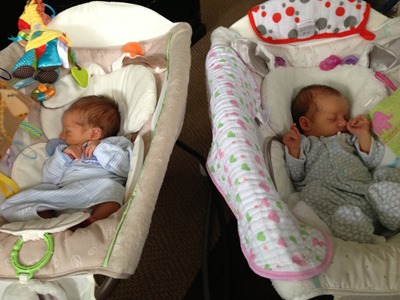 I foresee hours of make-believe time playing house, school, airports and restaurants for these two. Secrets between just the two of them that will drive their parents bonkers. Times of rubbing each other the wrong way because they know just the right thing to do and say to get under each other’s skin. I foresee lots of laughter and teasing. One asking the other…pleading with the other…to include them in hang-out times with friends. Tickle times that get out of control because Wynn didn’t know his own strength. At least a couple of times when Maysie wins an Indian-leg wrestling match that she can hold over his head for years to come. I foresee looks across the room that acknowledge how the other is feeling. Wynn coming to Maysie’s defense. Maysie coming to Wynn’s defense. Wynn cheering for Maysie. Maysie cheering for Wynn. Wynn rolling his eyes at Maysie because she’s exhausted her word count for the day, and especially because it was laced with so much emotional and relational info it makes his head want to explode. But he’ll have the patience to listen. And Maysie will be the utmost protector of Wynn, a living guard between girls and her brother. They’ll share a bond of memory and family unlike that of any other. There will be moments of sheer adoration and sheer annoyance. Moments of affection powerful enough to make them feel like they will burst. And from time to time, there will be an anxiously-wrought stomach on behalf of the other, wanting to rush to the other’s side to help, support, to simply be in the other’s presence.

All because of love.

So doubly happy for you and your family, Meg!

I admit I am teary can't wait for your visit!!!