Home Archives Profile Subscribe
May Days
June, Way Back When

Just the Two of Us

I’ve been there several times, but it’s been 20+ years. And Matt’s never been; it was his first time seeing the Pacific up close and personal. It was dreamy!

We left last Tuesday morning as it was pouring down rain and arrived a few hours later in California paradise. We had to laugh because Matt’s first impressions were:  rude drivers in very expensive cars. (And lots of dogs.) Even the Hertz rental car employee kept offering us top of the line vehicles: a Porsche, a Corvette convertible, and a Mustang convertible. He almost had us at the Mustang. Because after all, cruisin’ in a convertible in California is pretty much the way to go. But our practical side took over so we accepted what they doled out us: the economical Chevy Sonic. I wasn’t sure Matt was going to fit. The additional cost of the Mustang, had we rented it, could have been been covered by the daily hotel parking fee that was a surprise gift to us because it was an anniversary trip. But what we lacked in coolness we made up for with laughter whenever we laid eyes on our Sonic and heard its high-pitched “eee-ee-ee-e” squeaks every time we braked.

We received great recommendations from some friends on places to eat and things to do. When we arrived, we ate lunch at Café Chloe in the middle of downtown. And then, our bodies dictated what we did the remainder of the day: we rested. We spent the afternoon and evening at our hotel that had a glorious view and sunset each evening, and ate dinner by the pool where we caught our first NBA finals game in I don’t know how many years. 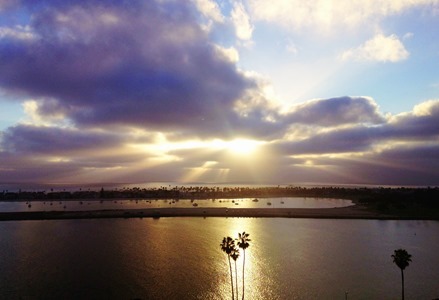 Wednesday we hit the San Diego Zoo which was astounding! It was probably the one thing we did that made us miss the kids the most because they would have loved it. We will have to go back one day with the halflings. We spent hours there and didn’t even see everything. The highlights were the animals you don’t get to see at just any old zoo: the rhinos, hippos, polar bears, gorillas and pandas. We saw some great action out of most of the animals. Truly, the foliage and beauty of the landscape was breathtaking. 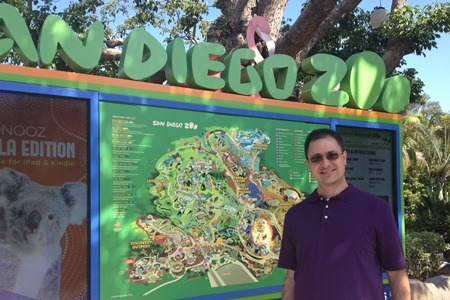 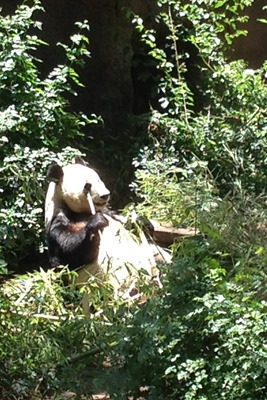 I had a hard time adjusting to the two hour time difference (which brought back memories of our honeymoon in London where I’d pass out on the Tube). I woke up at 5:30 every morning, got a bit moody around the time of the kids’ rest time, and was in bed by 8:30 p.m. So Matt knew what I needed come 3:30 Wednesday afternoon: chocolate. We went to the most incredible dessert place I’ve ever seen: Extraordinary Desserts. Gaga and Momma have always loved decorating birthday cakes with pretty flowers, and so this place hit a soft place in my heart with their rose petals and flowers on every dessert. 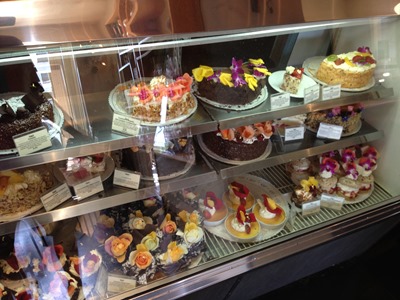 We found a spot on a lovely part of Balboa Park to eat our treats, and then we explored the park a little bit. We stayed around to catch a live, free concert of rock n’ roll classics which was a lot of fun, and then we had to see what all the fuss is about: we munched on our first In N’ Out burgers. Yes, they’re pretty tasty. 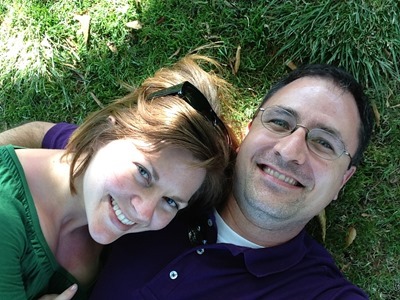 (I made him do this cheesy pose.) 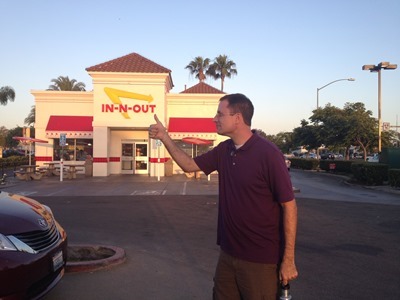 On Thursday we trekked over to Coronado Island, rented bikes, and explored. The Pacific is more beautiful than what I remember! The beach wasn’t crowded, the water was a lovely, shimmering blue, and it wasn’t too cold (at least for the foot dipping we did). 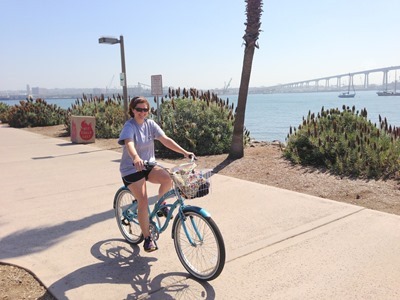 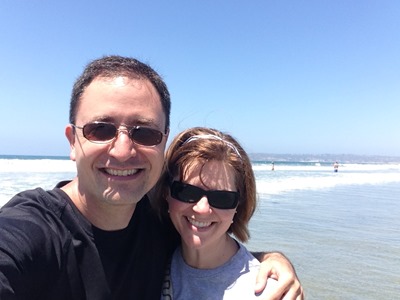 I did what I do best at the beach: collect sea shells. I couldn’t believe what I found within two minutes of stepping foot on the wet sand: a sand dollar! As a little girl, that was the one shell I always prayed to find but never did until our trip to Charleston six years ago. I came home with five this time!

We were fascinated by the famous Hotel del Coronado, where we ate with a beach-front view, enjoyed some ice cream, and marveled at the Harris’s Hawk that was used to guard food from the seagulls. Come 2:30 p.m. again, I was crashing hard and fast. We found a bench by the beach and I fell asleep in Matt’s arms <grin>. I hope he would have awakened me had I been snoring in front of everyone. 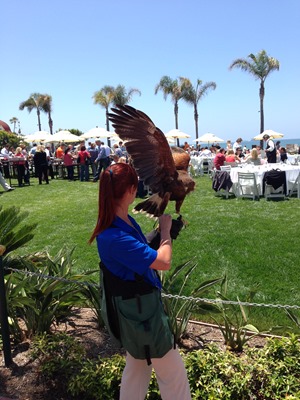 Pretty tired and not wanting to get all dressed up, we canceled our reservations at a nice place, made it back to the hotel for a dip in the pool (which was too cold for me), ordered in pizza and watched the last NBA finals game. And cue another gorgeous sunset. Friday morning we ventured up to Torrey Pines State Reserve and loved our hike! Well, for the most part. Half way through we spotted a rattlesnake slithering into a bush a few feet away from us. That will be the fastest way you’ll get me to disintegrate into a blubbering, whiney mess that just wants to call it a day! The one satisfaction I had from that too close encounter was being able to tell Brennan we saw a rattlesnake, whereby he wanted a picture. A picture!? Who goes back for a picture!? Not I. 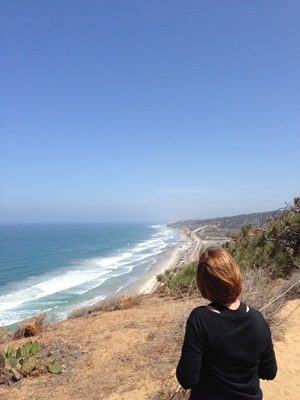 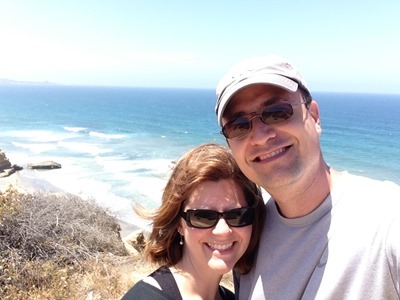 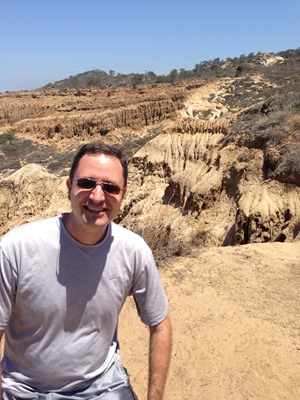 Suffice it to say, we finished our hike down to the beach and we walked back along the beach instead of through the hills. Way more romantic any way.

We drove back through La Jolla where we walked along the main strip, got to see the amazing Cove where people swim among the sea lions, and ate at George’s on the rooftop café. That was our celebratory anniversary meal.

(Sea lions are on the rock.) 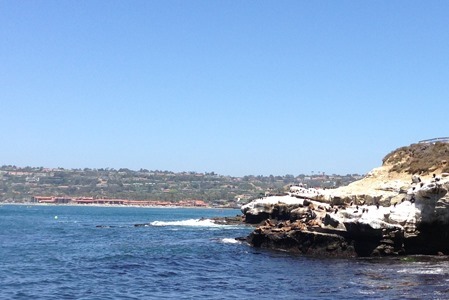 (Our view from George’s.) 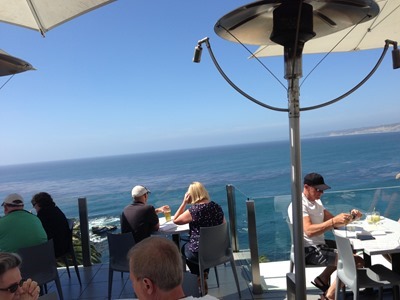 My folks took care of the kiddos while we were away, and their adventures warrant a whole post on its own.

We marked our 10.5 anniversary while on the trip. We are most grateful for the past decade of marriage! God has done some incredible things and blessed us with so, so much.

For kicks, here’s a ‘before and after’ shot. I have my own opinion as to who has aged more the past ten and a half years <grin>. That picture was taken on Christmas morning 2002 (before iPhones!), four days after our wedding. By God’s goodness and grace, here’s to many more!

And you better believe this put the itch in us for more frequent trips…just the two of us! 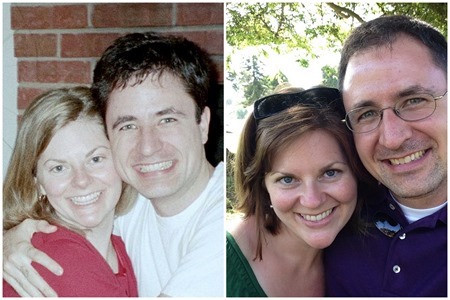 i love this!
love the two of you celebrating your life and love!
asking Jesus for many more years and joy and tears and Himself to come!!!
Congratulations!!!

Aw. So fun! I'd say you are both more beautiful/handsome 10 years later. You both age so well. :) So glad you got away and enjoyed yourselves.