Since coming home from our family getaway last Sunday, the following has happened:

It's Friday evening, the start of football season, FALL, and Brennan's preschool starts back up on Tuesday which means: I MADE IT THROUGH THE SUMMER! Barely. It took sending the kids to my folks for a few days of solitude (thanks overflowing to Popsie and Mees!); taking a small getaway as a family; lots more "Wild Kratts" than I care to admit; many tears with mornings we had to pause, pray and start the day over; texts from my friend Jill telling me that I've almost made it; a few moments I ran to the closet to hide; and getting friends to pray for me. Part of me is writing about this light-heartedly and part of me is also dead serious. August was hard to get through. We've been in summer since May 16th and have done tons of fun things and made lots of memories. But these last couple of weeks the kids and I wore down. But we made it to the finish line. Not as well as I hoped, but I am so grateful to cross that line.

So the calendar will flip over to September tomorrow, and we'll watch some football (Gig 'Em!). I have the privilege of taking my boy on a date as well. We'll go get him his before school haircut, grab some lunch and then see "Planes". I'm so excited to also decorate a little for fall and display a beautiful new wreath Momma made for our front door. I even bought some fall scented Glade Plug-Ins to enhance the season's sensation in our home.

As I sit down to write tonight, battling a little of the "keeping up with the Joneses", I pause to reflect how truly blessed I am. Particularly as I think of my husband, my son and my daughter, what absolute, precious and priceless treasures I've been bestowed. Our little family's connection with each other is something I pray only flourishes and withstands everything that will want to nibble its way through that bond. It's so much more important to me than anything material or tangible on this earth.

Our few days away last week to Lost Pines was incredibly special. We left Thursday morning and surprised the kids with our destination. Brennan recognized it from being there for Momma's birthday celebration last fall, and he was so excited! Upon our arrival, Brennan made us each cards to thank us for bringing him there.

The view from our room. The kids could go in and out of the sliding door and run to the playground. 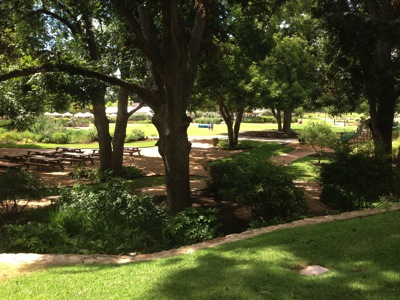 This guy asked and asked to play checkers. So we played some of his first games together. He caught on pretty quickly and even beat me <grin>. Then I played Matt and got creamed even more. We spent most of our days chilaxin' by the pool. I have fond memories as a kid staying at hotels with great pools and getting to eat dinner by them, swimming until the day's end. I'm not sure if this girl takes her eyes off her brother much. 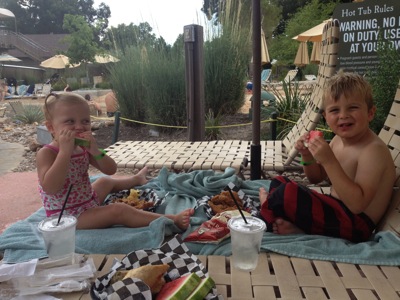 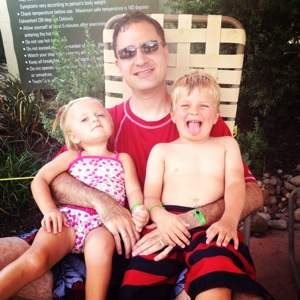 I'll admit, one of the things I look forward to most about Lost Pines is the breakfast buffet. There is a gentleman there who arrives at 4:30 a.m. to chop all the fresh veggies for the omelets and they are some of the best I've ever had. As a kid we often visited The Lodge in Cloudcroft. So much so that one of the bartenders who'd make me my Shirley Temples and the pianist who'd always break into the "Mickey Mouse" song whenever he saw me and Mac, knew us quite well. I wonder if the omelet man will become that for our family. I better actually find out his name as a start, huh?

The livestock is always a hit. 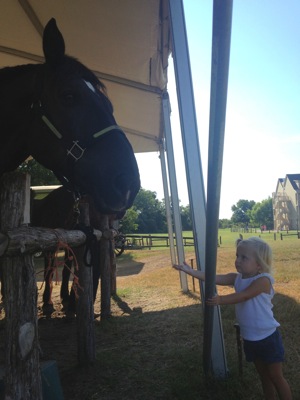 They had great family activities going on that were a highlight for Brennan, particularly. Both kids liked all the painting and crafts, and Brennan got to help shoe a horse. 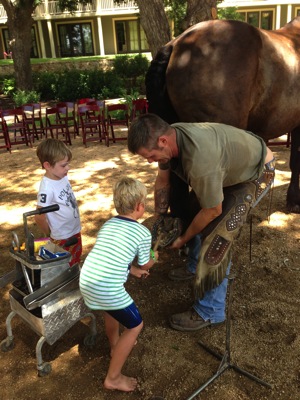 One of the things that astounds me and Matt about Brennan is how quickly he meets other kids and joins in playing with them. It takes some prodding for him to start talking to adults he doesn't know well, but there were a number of times Matt and I would wonder where Brennan was and he had run off to jump in the middle of a father/son football game, or a group of 10 year olds playing baseball. He joined a whiffle ball game with older kids and for the first 10 minutes, one of the kids kept yelling "easy out". After a couple of base hits and runs, the kid piped down. On Friday, Brennan played all sorts of pool games with another boy. We're just glad that when the friends he makes disburse, he still likes playing with us. 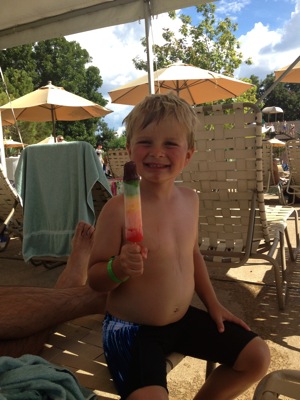 I was astonished that Brennan passed over the making of s'mores for another pickup game of baseball he included himself in. The little girl enjoyed her bites though. 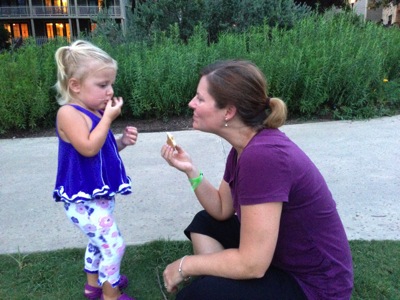 They were mesmerized by the cartoons they got to watch as we dressed for breakfast. 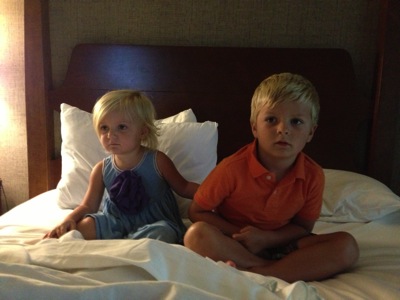 This guy is hilarious. He started blabbing away to a 3 year old little boy sitting next to us waiting for the wagon ride. The boy ended up hurting himself and cried a little. Brennan took it upon himself to help cheer him up by doing that arm swing trick where he hits his arm and then the arm swings up to hit his head (a signature Matt move). Overly excited about the arrival of the horse covered wagon. 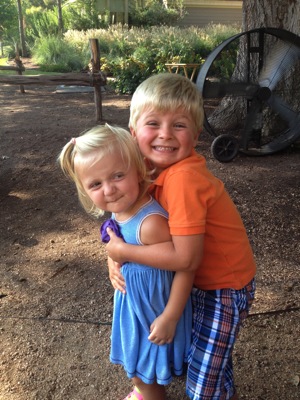 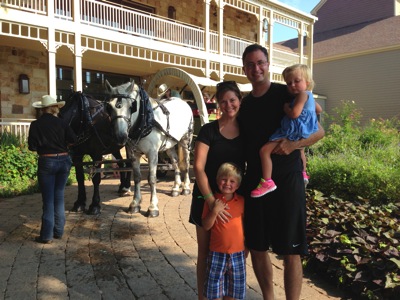 We loved the lazy river! 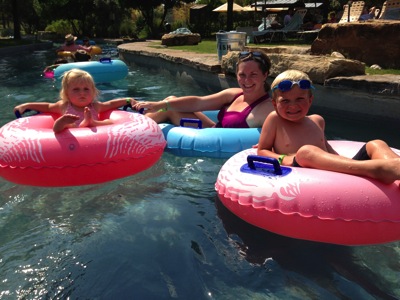 Saturday afternoon as we floated along, Kensie Jane fell asleep in her tube. I found a shaded spot in a less-traveled area of the river and held onto the edge for 40 minutes while she napped. 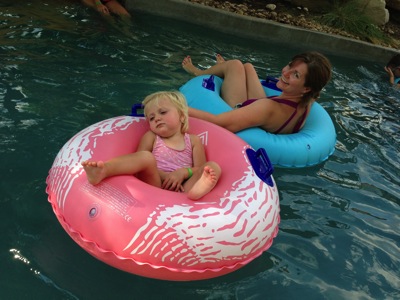 We girls felt most lovely wearing our pretty flowers Brennan picked for us. 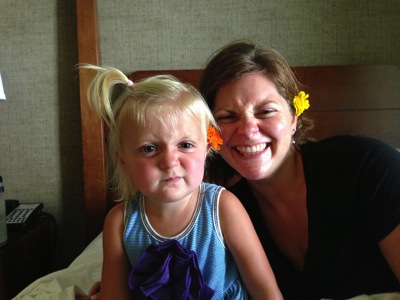 The video below has all of the pictures I've already posted, but at the end of it is a video clip of Brennan going down his first water slide (which was a HUGE accomplishment for him) and Kensie Jane who loves swimming, too. She has no fear of the water slide or of being in the water. And this trip has made pool experiences even more stressful for me and Matt because she will go under water at any point in time. She's getting it though. (And yes, Matt realizes he needs to change the year to 2013 <grin>.

I'll take that kind of finale any time!

Too beautiful. These are the sweet days. And I know what you mean about summer . . .

Lovely vacation memories! Your kids are amazing in the water!!