Ten stockings! This was a highly anticipated Christmas with Mac, Julie, Wynn, and Maysie coming from D.C. to celebrate with us, and finally introducing the twins to their uncle and cousins who were eager to meet them.

On the 23rd, our family made the trek to San Antonio loaded down with two carfuls of luggage, gifts, food, and one dear, old, arthritic dog who couldn’t get comfortable despite the fluffy bed underneath her paws that bared her weight as she stood the entire drive.

I love walking into my parents’ home. It always has the fragrance of something delicious, and I enjoy going from room to room observing what beautiful treasures she’s put out for us to enjoy, either for the Christmas season or because she’s simply attempted something new, like a homemade wreath for the front door. 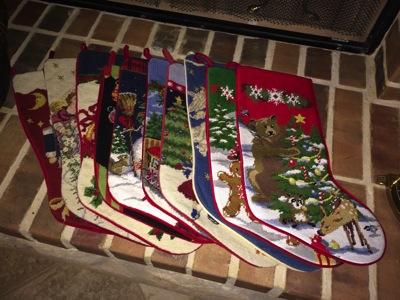 We sent our kids off to bed while my dad, Matt and I drove to the airport with pounding hearts to greet the D.C. clan. I couldn’t wait to get my hands on those babies! But Matt fought me for them and won. The next morning, Christmas Eve, was Brennan and Kensie’s first face-to-face introduction with those babies. Let’s face it, we’ve all been smitten since day one. How could you not be!? 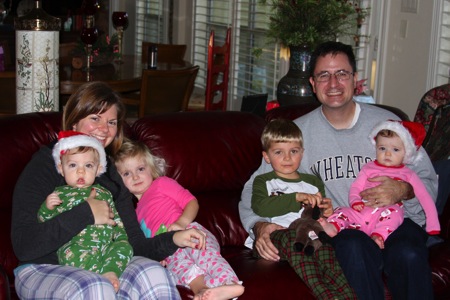 Down the street from my parents’ is a great burger place that has a humungous play area for the kids to run around. Until this boy is ready to run, his aunt will be a happy camper with him in her arms. 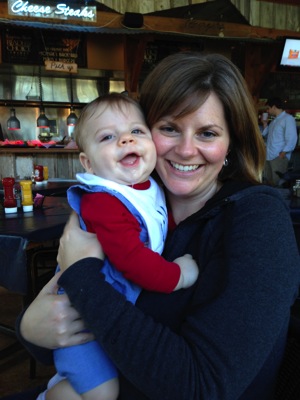 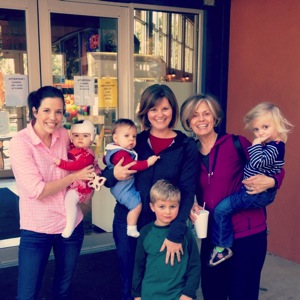 Christmas Eve wouldn’t be complete without our luminario-making tradition I’ve being doing with my Daddy since I was a little girl. The last few years we haven’t been able to do it because of either travel or gusty wind. But we were good to go this year, and my little guy joined in on the merry-making, shoveling dirt into the brown paper bags and positioning the luminarios just so. 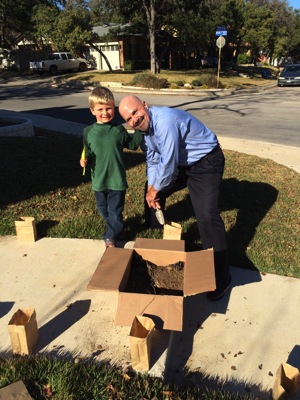 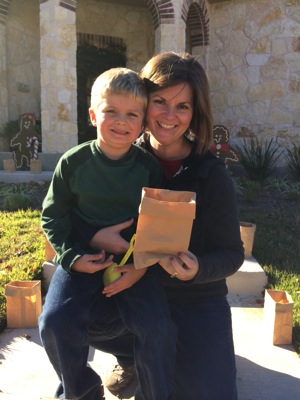 Off to Christmas Eve services with a goofy boy who whose mother was apparently asking way too much of him in wanting him to smile. Instead, he thinks he’s being hilarious with the frown. 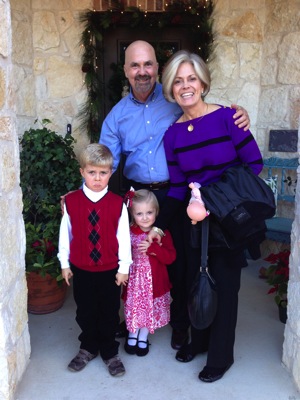 Now this family knows how to take a good picture. 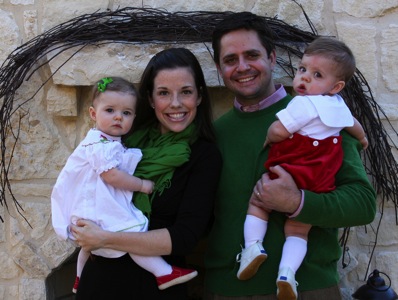 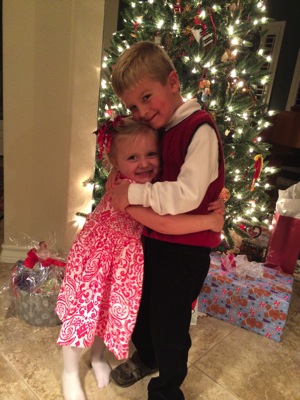 Merry 1st Christmas, sweet Maysie! When Kensie Jane is with these babies, this is how you’ll find her most of the time. She plops herself on the couch or floor, spreads her legs open wide, and pats the spot right in front of her asking for one of the babies. She is a mother-nurturer to the core. 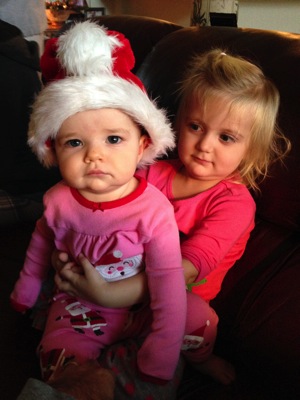 Merry 1st Christmas, Wynn! I foresee some awesome Texas A&M games in your future, and your older cousin will be right by your side, a forever-pal. 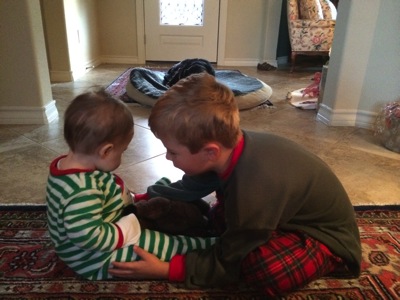 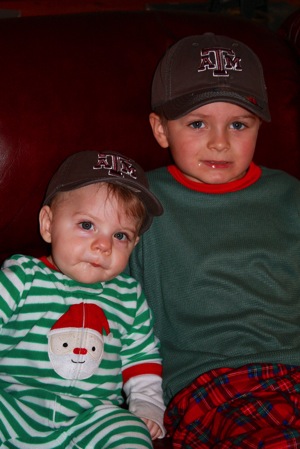 Happy Birthday, beloved Jesus. Thank you for coming to rescue us and for loving us. We treasure you. 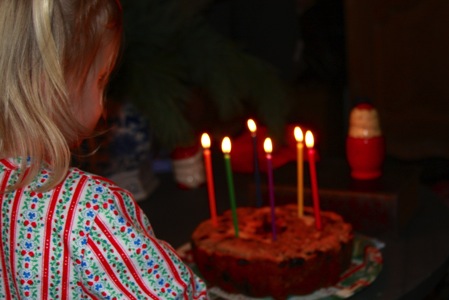 We have a new tradition at my parents’: s’mores! Either the flash wasn’t kind to our eyes or we were deliriously intoxicated on sugar. Knowing Brennan and myself, probably the latter. 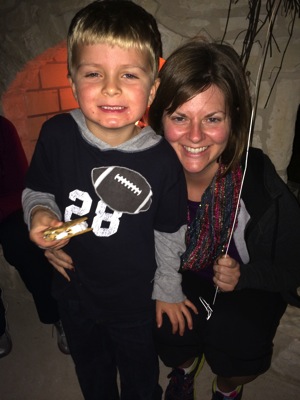 The day after Christmas, all 10 of us trekked to my Daddy’s office to see where he works and meet some of his co-workers. A very sweet lady who works in the gift store gave the children balloons, which went everywhere with us on the tour. And I’m pretty sure that whenever we visit Popsie’s office again, B&K will inevitably expect balloons. 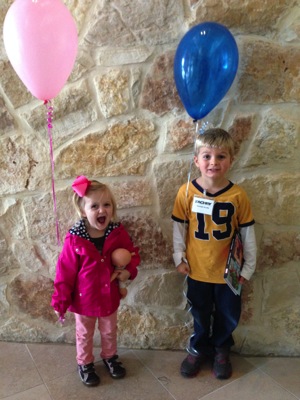 Family picture day! We went in on this Christmas gift to my parents with Mac and Julie, and it was a blast. We had a fabulous photographer, Lauren, who graciously took care of us by knowing a backup location because of the dreary, drizzly day that it was, and the location ended up being perfect! Lauren was a joy to work with, and this is just one of our favorite pictures; I’ll post more later. 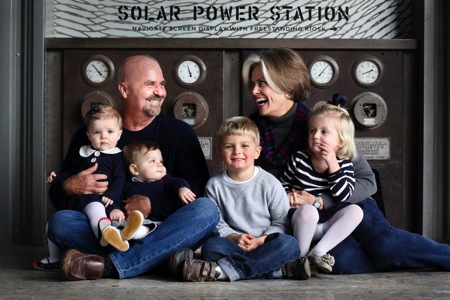 We filled our tummies with a Chuy’s lunch afterward, and then Matt found great joy in testing the slow-mo video and burst mode on my iPhone that captured the following two shots. 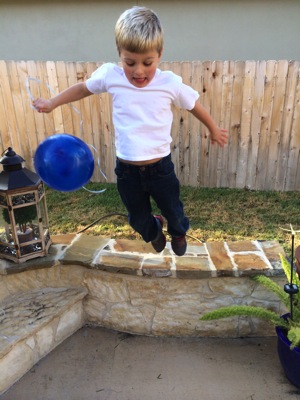 Since she started gymnastics, jumping is her most favorite action. 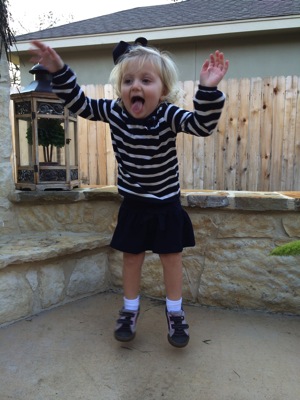 We had some special visitors! My daddy’s brother and sister drove in from Dallas to spend some time with us, and it was wonderful to see them! 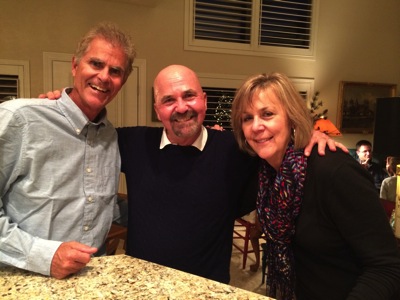 Lots of reading takes place around these parts. 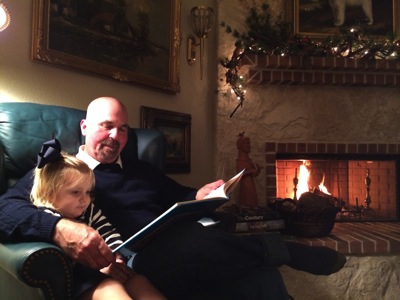 I love this girl! I made red velvet cake balls for her (well, for me, too), and I took pleasure in watching her concoct her bowl full of ice cream mixed in with cake balls. I mean, she knows how to do it up right! 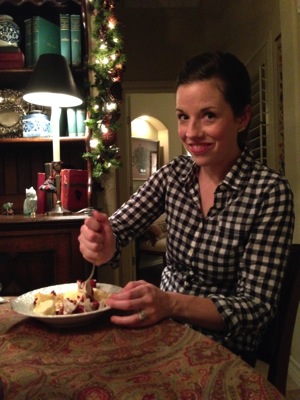 Seeing this pictures makes my heart burst with affection. I love watching my brother be a daddy. It’s somewhat other-wordly in that we are both old enough to have babies! But mostly there’s the part of me that stands back and watches my little brother with esteem as he loves and serves his family. 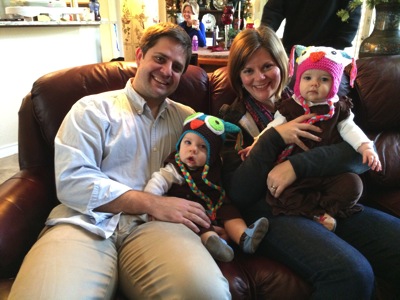 This was an every day occurrence I took advantage of: afternoon snuggles! 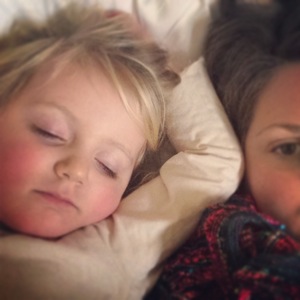 This Christmas was incredibly special for the ten of us to all be together. And I’ll also look back on this Christmas with a twinge of heartache. Our Molly-girl’s health took a significant turn those few days we were together for Christmas. The drive took a toll on her hips; she unexpectedly started bleeding from her mouth; most of the time she couldn’t get up on her own and we had to carry her in and out; and she didn’t have much of an appetite (other than the feast of steak she enjoyed Christmas night).

Christmas was marked by nights in Matt’s arms weeping and my heart’s preparation for a decision I have dreaded since the day Mac entrusted her to us when he moved to D.C. after having her as a puppy for two years at A&M. But Christmas was a gift of time with Molly bestowed to both me and Mac. Mac’s children met our precious puppy, and Wynn was enamored with her. He went back again and again to pet her and receive her lops. And despite how she was feeling, she was utterly happy to oblige. 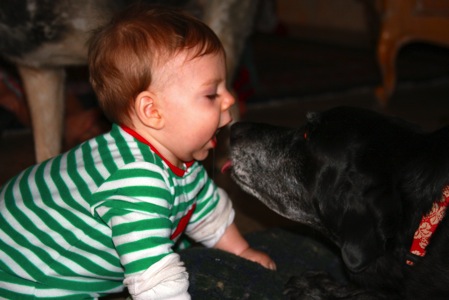 The night of the 28th, Mac and I spent it together at the ER with our girl, trying to figure out why she was bleeding from the mouth. Mac was just the person I needed that night to sit with me in the waiting room, to take in the reality of what was happening, to cry, and to talk about all sorts of things while we had one-on-one time. Molly is a shared love he and I have…we will always have. Thankfully the bleeding was able to stop without much intervention, and Matt and I were able to take our girl home with us to settle her where she is most comfortable. We weren’t sure what the next day would hold at the vet’s office, and we confirmed that our time with her would be short. But we were given the gift of two more months with her, and Christmas afforded my dear brother the opportunity to say, “goodbye”. 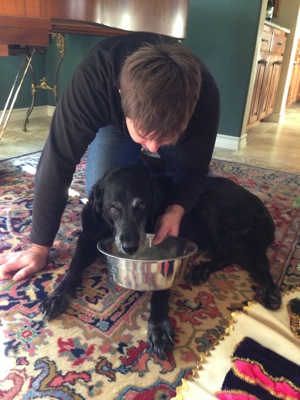 I want, I need, the opportunity to write more about my Molly. But to end Christmas on a lighter note, I leave you with this picture of blue painting tape that hung from the counter corner all Christmas long to signal Brennan not to turn the corner too quickly lest he run his noggin smack dab into it (which he has done once before). 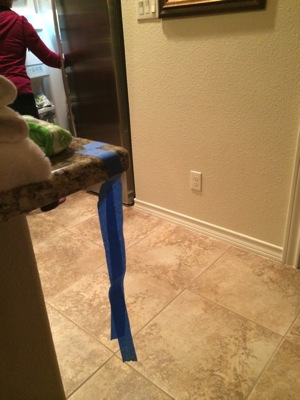 Many thanks to my parents who lavished all of us with generous hosptiality in their new home (which we all got to pray through and bless), lots of laughter, yummy food, and the pleasure of their company.

started getting teary w/ the pic of the boy/girl siblings. some of which were wearing owl hats. and almost lost it seeing my 2 boys w/ the sweet puppy. what a gift that these precious moments are forever captured! a merry christmas indeed. could have done without the #fatkidtrick pic of me eating. But then it wouldn't have fully captured the season?! :)