July was an amazing month. With every fiber in me, I am savoring the sweet memories we made as a family, and it was also personally momentous as it was the last month of Cliff and Christine’s sabbatical! We were on the brink of being able to say, “We made it!” after months of leading teams without Cliff at the healm. Just one more month...

The following pictures are from pre-trip to Colorado. That trip deserves its own post.

Who doesn’t like frozen yogurt for a spontaneous summer treat? Little girl insisted on wearing her princess dress, which is fine by me. Sometimes I wish I had my own dress-up dress I could throw on any time I wanted anywhere I wanted. There’s something beautifully astounding in watching my nearly three year old girl be completely free in who she is. 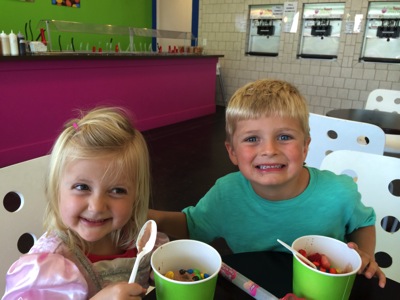 Fourth of July weekend visitors who love to read to us and swim with us makes the best Fourth of July weekend ever. We missed the fireworks display this year with our friends earlier in the week because either someone wasn’t feeling well or we were exhausted. Knowing our track-record lately, it was probably both. We saved our energy for the weekend with our guests. Man, I really need to write these more often because I do not remember what we made for dinner to celebrate, but I do remember I made homemade strawberry ice cream with the strawberries we picked from Sweetberry Farms in the spring. It was a decadent, tasty treat! 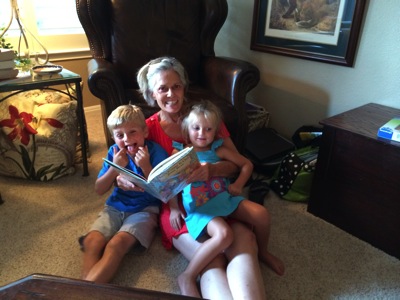 It was Master Brennan’s turn to be lavishly loved (aka ‘spoiled rotten’) at Popsie and Meesie’s home. He went to San Antonio with them on Saturday and was able to enjoy a couple of nights with Popsie before he had to travel to the east coast for the week. First order of business was a night of making s’mores. There’s not a visit to my Gaga’s house I didn’t delve into the stash of Oreos she had in the drawer underneath her oven. They were just arm’s length away from the kitchen swivel chair. Bless my Gaga: she never once said I was eating too many. She let me eat to my heart’s content. And so shall it be for my children and their s’mores. 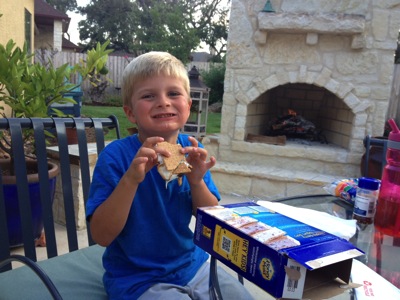 It’s simply unbelievable to me. For the past nearly two years, I’ve been hanging onto hope that my friend, Lauren, would be offered a job at UT. At last, it happened! Lauren is my oldest friend. We met in the fourth grade, lived down the street from each other, she was a bridesmaid of mine, and we’ve traveled to see each other in various places we’ve lived. I cannot believe she now lives in Austin with her husband (also a UT professor) and her 3 year old precious girl, Charlotte (only a few months older than KJ)!! I mean, I’m still pinching myself.

While Brennan was in San Antonio, our families had dinner together. How can it be that we are holding two little girls of our own now?! 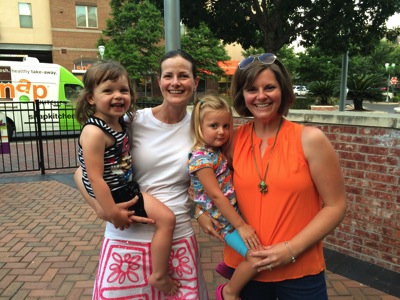 At another outing our families had together at Central Market later in July, these two were movin’ and shakin’ to the live music. 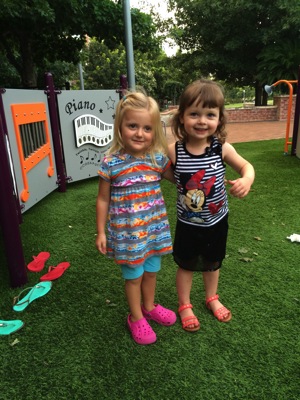 A splendid morning for French toast. 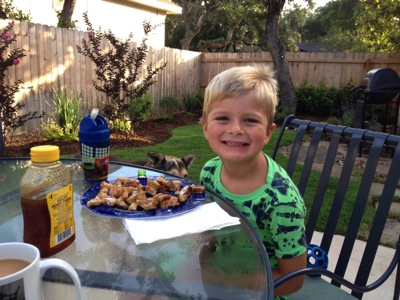 This lovely one helped me and Matt greet on Sunday morning at church. She has a very natural gift of serving. 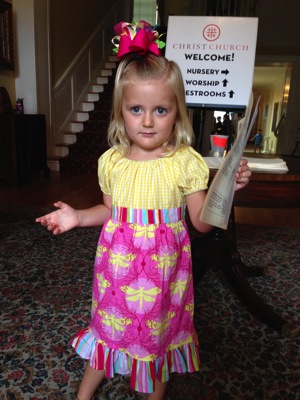 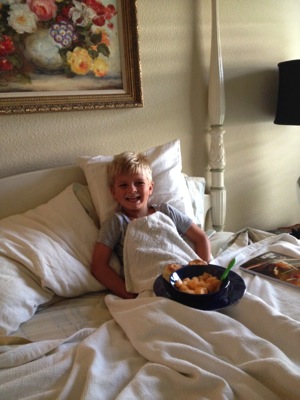 …who is so blessed to have a Meesie who not only serves him breakfast in bed but will also take him to Sea World! 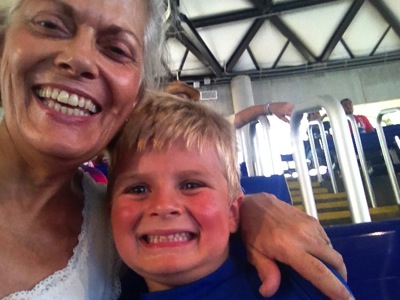 It’s another week of swim lessons for this fish. Unlike Brennan who, while he absolutely loved the water from a very young age, had a good measure of caution and reserve in the water, she has not one iota of it. She thinks she can swim. Granted, she’s getting better and better, and made amazing progress this summer, but good gracious, I cannot take my eye of her for one split second. She also doesn’t listen to us as well as Brennan does and ‘thinks’ she checked with us before she jumps into the pool. It’s slightly unnerving and exasperating. She’s quite proud of herself.

Oh, she’s also been very insistent upon not being called “baby” anymore. I can get by calling her my “little big girl”, but much prefers “big girl”. 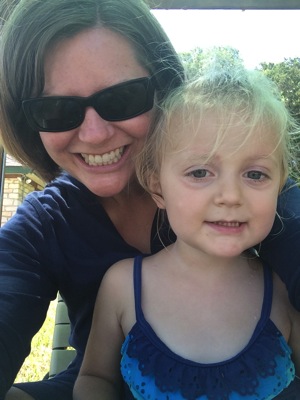 Matt took his girls out for a special dinner at Jack Allen’s. 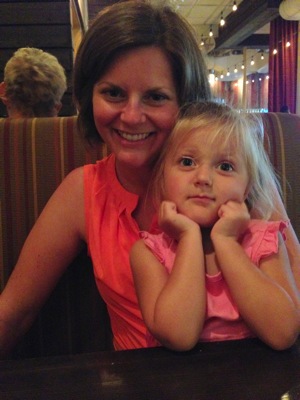 At three years old, she braved it confidently! 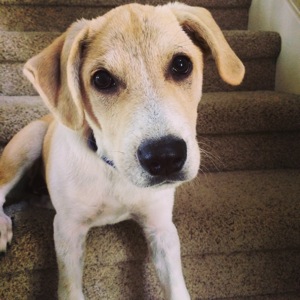 That smile! She’s so excited about the princess crown Daddy made her. 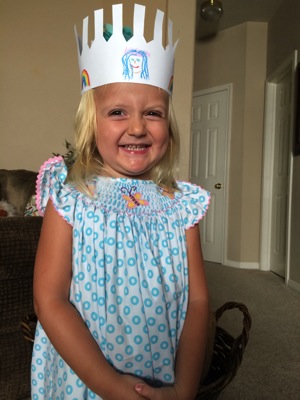 That smile! It’s good to have him back home after his most wonderful escapades with his Meesie. 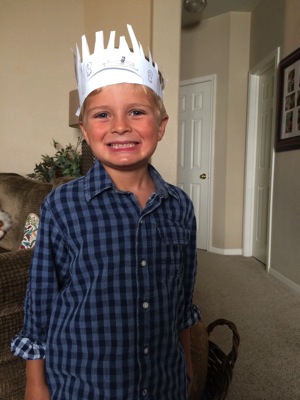 We met one of Brennan’s school buddies at the splash pad and it ended up raining. That didn’t stop us one bit from having fun, whether it be sliding down a slippery slide at super speed or collecting rocks. 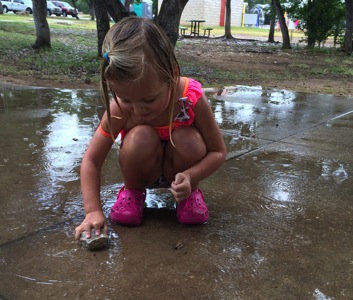 They’re a mutual fan club. Except that every time she tells someone about her puppy, she says, “Watch out. He bites.” The bigger Gatsby gets, the faster the kids learn they aught to stand up quickly rather than to succumb to a puppy frenzy of nips and scratches. Gatsby and Brennan are nothing less than brothers. We have to constantly intervene. 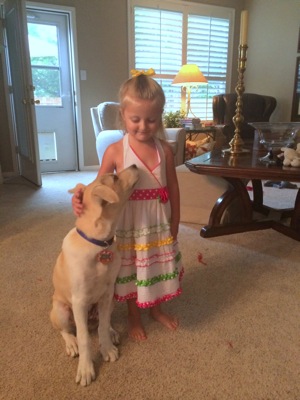 Our attempts to visit our dearest of pals in Dallas this spring and early summer kept falling through. Surgeries (for both families) and my own limitations of time and to-do lists that would send me into panic attacks meant that we hadn’t seen each other in a whopping 9 months! I had a whole new baby Hopie-girl to meet for the first time! We had the best time meeting in Waco (a (mostly) convenient half-way point aside from any horrific traffic incidents that would more than double the time it usually takes to get there…like this particular day). We went to the zoo, a surprisingly great zoo for Waco, and then ate dinner together at Chick-fil-A. 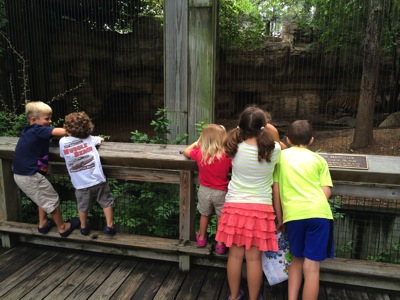 I love this soul-sister of mine. 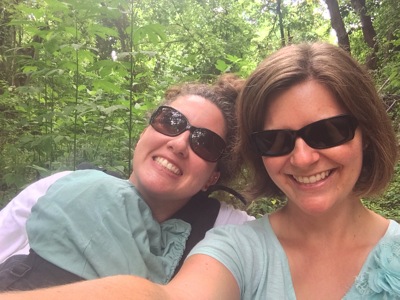 On Saturday, July 19th, Matt took Gatsby and the kids to Walnut Creek Park. It was a favorite of Molly-girl who could roam leash free and swim in the stream. Gatsby was finally able to go and try it out himself. It’s a dog’s Disneyland. The kids like it, too <grin>. I enjoyed the quiet Saturday at home packing for two upcoming getaways. 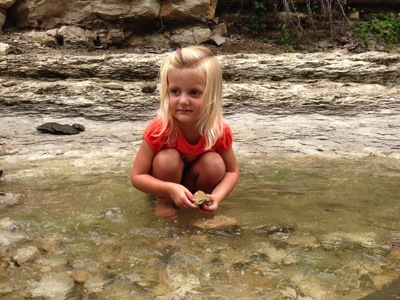 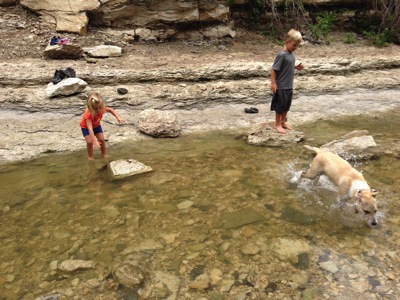 On Sunday morning we had a special, early birthday surprise for our girl. For her present this year, we made reservations at Lost Pines for the night. The kids woke up and we all piled into bed where she opened her present. Our bags were all packed so after breakfast, we hit the road! 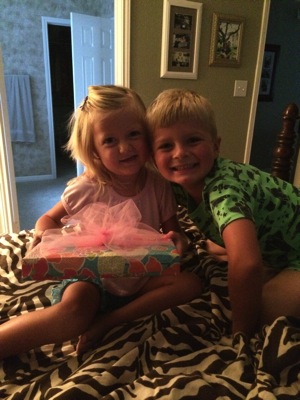 There was only minor hiccup: our puppy. We didn’t want to ask someone to watch him because as a puppy, he’s a little more work and slightly more unpredictable. We couldn’t let him roam in the house with the dog-door open quite yet, and we didn’t want to inconvenience anyone.  I checked around a number of places to board him somewhere, but they were all booked! So we took him along with us. The hotel kindly waived the pet-fee. The only glitch was that we got there early and our room wasn’t ready. So yours truly sat with the dog while the rest of the gang swam. Same thing for checkout. We stayed around longer than checkout and had G-dog to deal with. He did super, it was just slightly distracting and inconvenient. But it didn’t keep us from having a blast!

The kids liked riding the longhorns and sat mesmerized by a ‘birds of prey’ show before our picnic lunch and swimming. 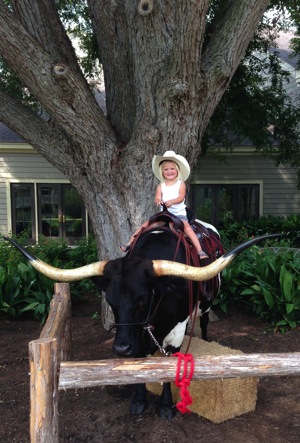 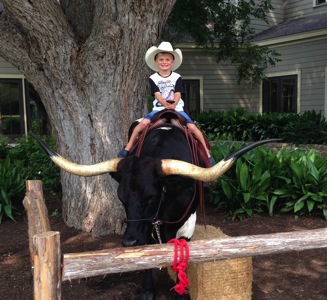 I realize I’m wearing this same orange blouse in all my pictures throughout July. What can I say? I didn’t take it off all month? <grin>

Recently I was introduced to Stich Fix and ordered a box. The box filled with a few clothing items picked out by a personal shopper was so much fun, and I’ve had some success with the items they’ve sent (like the orange shirt plastered to my body this month). Matt and I are still discussing how frequently I can receive a box <grin>. 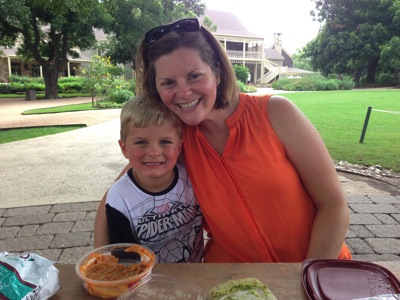 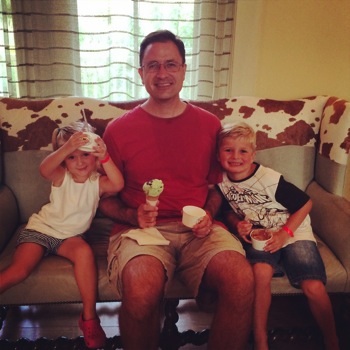 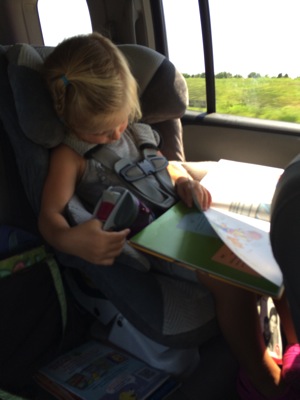 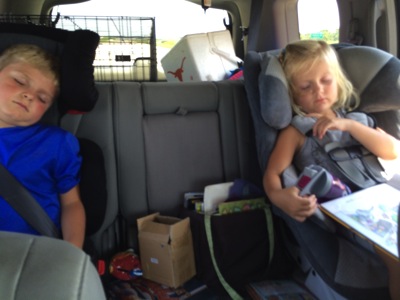 Popsie is Kensington’s July birthday buddy! He and Meesie came into town on the 22nd for us to celebrate with them. Before they went to a concert at the Cedar Park Center, we hit our regular “Mighty Fine” spot for dinner after swim team. I have a precious memory of Brennan leading Popsie and Meesie over to his friend at swim team because he “wanted to introduce them”.

This picture is one of my absolute favorites. 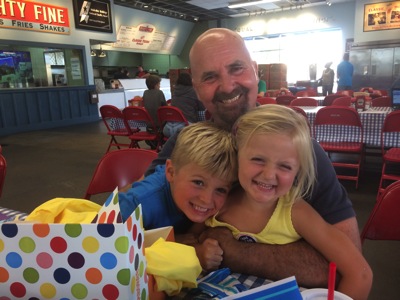 Bless, bless, bless my parents! They played and cared for the kids all day on the 23rd for me to clean house, cook, and get organized for our road trip to CO coming up in three days. The kids were in heaven of course, and I was able to get more done than I have in months and months. It was a huge gift to me!

I asked Kensie if she wanted me or Meesie to make her cake. I was sure she’d want Meesie, but she said, “Mommy, because I want to help make it.” And help she did! She was ecstatic to make her chocolate cake…which froze and traveled well. Her special addition: M&M’s. She told everyone about her chocolate cake with M&Ms on top. 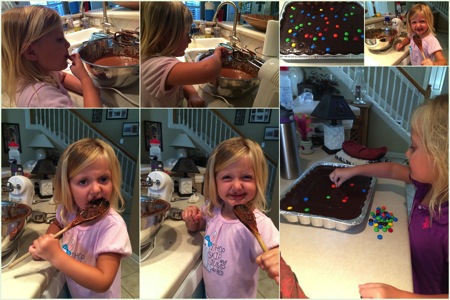 Thursday the 24th was a very exciting day. The kids and I went to Central Market and got to greet Cliff, Brendan and Cormack back home from sabbatical! Oh, what a joy it was to greet them all with big hugs. Albeit with a beard and a slight English accent, Cliff was mostly recognizable after four month <grin>. The kids still ask to play with Brendan and Cormack, who took them down to the pond to catch crawfish. Since we were leaving for Colorado, we took the opportunity to meet before the big welcome back Sunday on August 3rd.

“Off Grid”: two very wonderful, relieving words! These words meant 1) we were heading on our family vacation to CO…something we’ve looked forward to for months; 2) we were soon to be in the mountains…a place of quiet and the kind of magnificence that makes you feel appropriately small…a place that meets soul needs for both me and Matt; and 3) we made it through sabbatical!!! 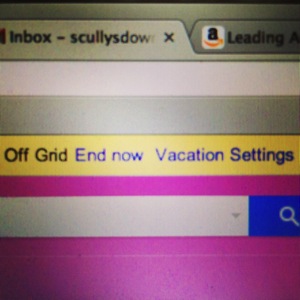