A year ago, I followed in Emily P. Freeman's footstep’s and posted a piece on what I learned in 2014.  Since then, I’ve loosely read her monthly posts on the same theme:  “What I Learned in _______”.  Some of these things are things newly learned, others are re-learned, and others are simply a more acute understanding of something I already knew.  Some things big, some small, some serious, some playful.  But I like what she’s getting at:  it’s “a way to look back before moving forward.”  Alas, January, February, March and April have already blasted past, so let’s take a brief look back before May gets away from me.

By the way, I might just be kidding myself to think I can keep up with blogging; I may have to force myself to believe the inevitable.  But I’m not there yet...

Yes, yes, I am behind the times.  But wow, what fun, imaginative, creatively crafted works of art that really do have a number of hearty themes intertwined.  With as much time as I spend in the car, I began listening to them.  Soon after, Matt followed suit.  We both got through the first two books rather quickly, and to this day, are still working through them.  People have raved about them for years, and now I know why.  They’re fantastic!  It makes me want to dapple in more creative storytelling to Brennan and Kensington.

After finishing a book, Matt and I will watch the movie together.  In my humble opinion, they are not even close to the magic in the books (no pun intended).  Granted, I fell asleep during the first few films we’ve watched.

2.  Why do I think I would be good being in control of timing?

I wrote a bit about Matt’s job transition here.  Most of 2015 was waiting to see if Matt was actually going to take a new job or not.  Of course I wanted it all planned out and wanted Matt to start the new job when we first expected him to:  in the fall.  Only the One who can do immeasurably more than we could ask or imagine could give us the gift of time that came from waiting, as tumultuous as it was.  Come December, we finally knew the job would come through and that Matt’s start date would be February 1st.  Little did we know, and little could we envision, that the waiting enabled Matt to take his remaining 2015 vacation (2 weeks worth) plus all of his 2016 vacation (4 weeks worth)!  So our family had a 6 week time of rest with Matt until he returned one more week the end of January to tie up loose ends and then start his new job February 1st.  And because we anticipated the fall start date, Matt had already been working for months transitioning things at work, allowing him extended time to make sure he finished well.  I think I’ll still have a conversation with the Lord about why He so often waits until the 11th hour for His people, but I know in that conversation He will be able to lay out for me memories and points in my life where those 11th hour rescues were continual reminders of His faithfulness to hold onto.

Having our last lunch at Dell with Matt. 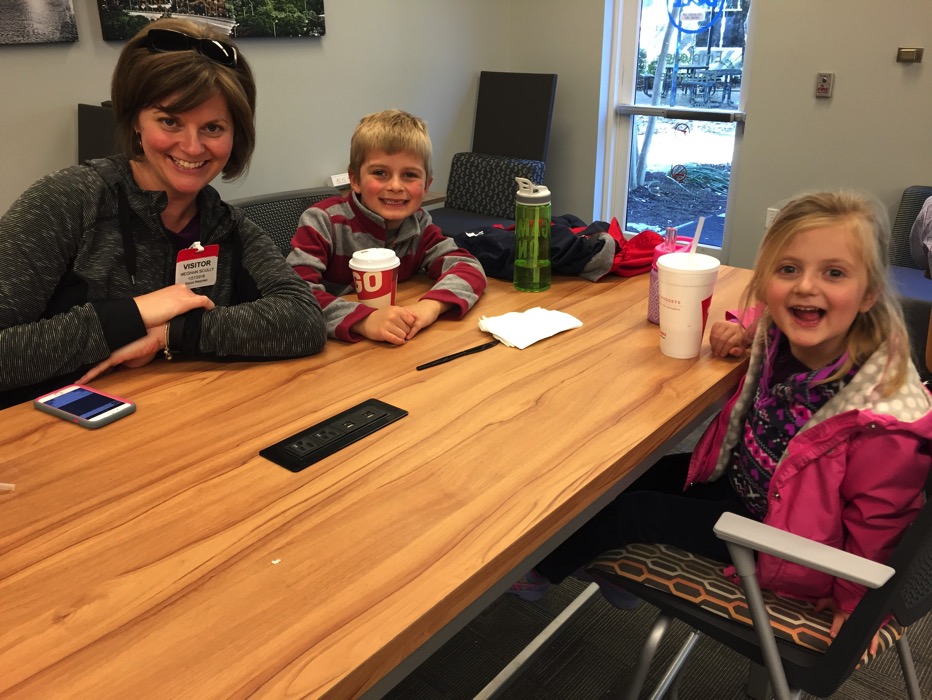 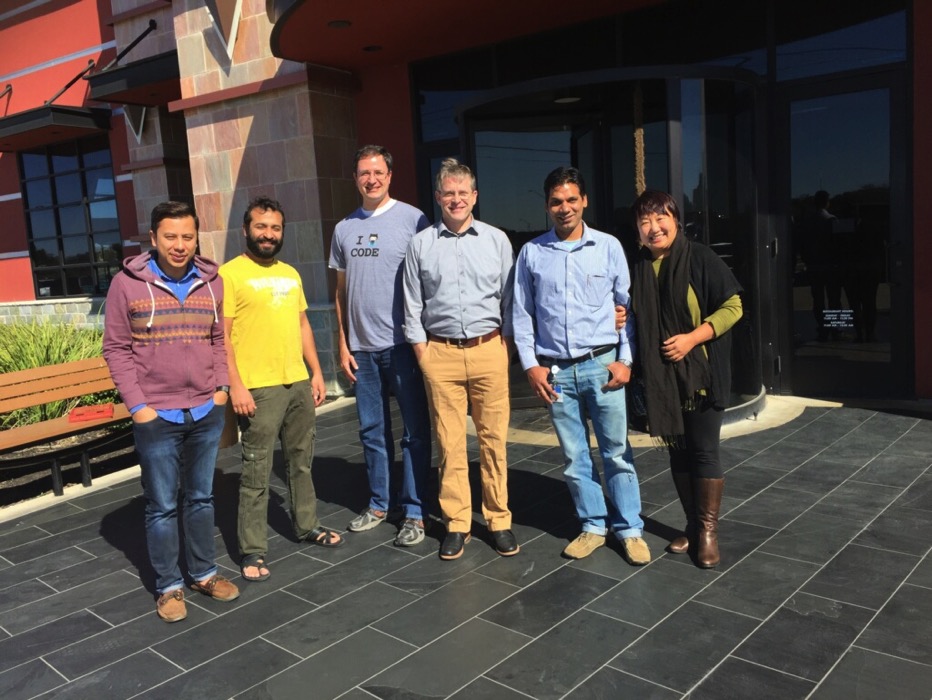 3.  We are a family of mountaineers.

Well, that’s a slight exaggeration, because none of us are about to embark on climbing Mt. Everest, nor do we have any technical knowledge about the craft of mountain climbing.  But if mountaineering starts with a basic love for the mountains, then I think we fit the bill <grin>.  Yes, give us mountain peaks in all their splendor and our family will be there in a heartbeat.  After we found out Matt would have 6 weeks off during the holidays and the beginning of the year, we spontaneously decided to run away to the mountains.  We found a home in Ruidoso, NM, bought some snow gear (thank the Lord for Amazon Prime two-day delivery!), piled in the car, and trekked out to our soul refuge:  the mountains.

My family used to have a cabin in Ruidoso, so I was returning to my neck of the woods, but it has been a number of years since I’ve been there.  However there is something about driving through New Mexico that feels like I’m returning home and fills the part of my heart that wants to be known.  We had snow, glorious, beautiful snow that we could play in!  The most snow Ruidoso has seen in years.  We slept well; we played games every night; I took time in the quiet to cook dinners for us; we slowed down; we went tubing; the boys went skiing (Brennan for the first time); we built fires and read books; we had snow ball fights and built snowmen; and I ate and ate and ate the white powder.  I am so, so grateful Matt swept us away and was determined to do this as a family!

“Thousands of tired, nerve-shaken, over-civilized people are beginning to find out that going to the mountains is going home; that wildness is a necessity.”—John Muir 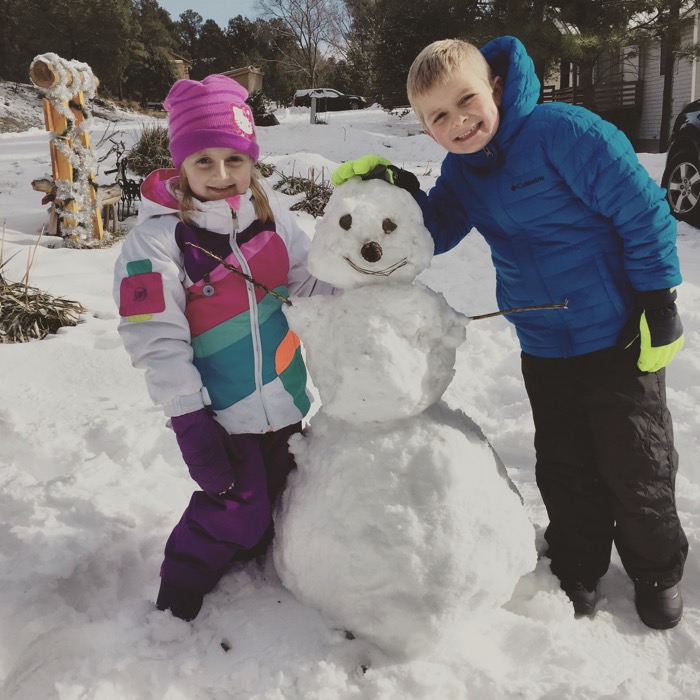 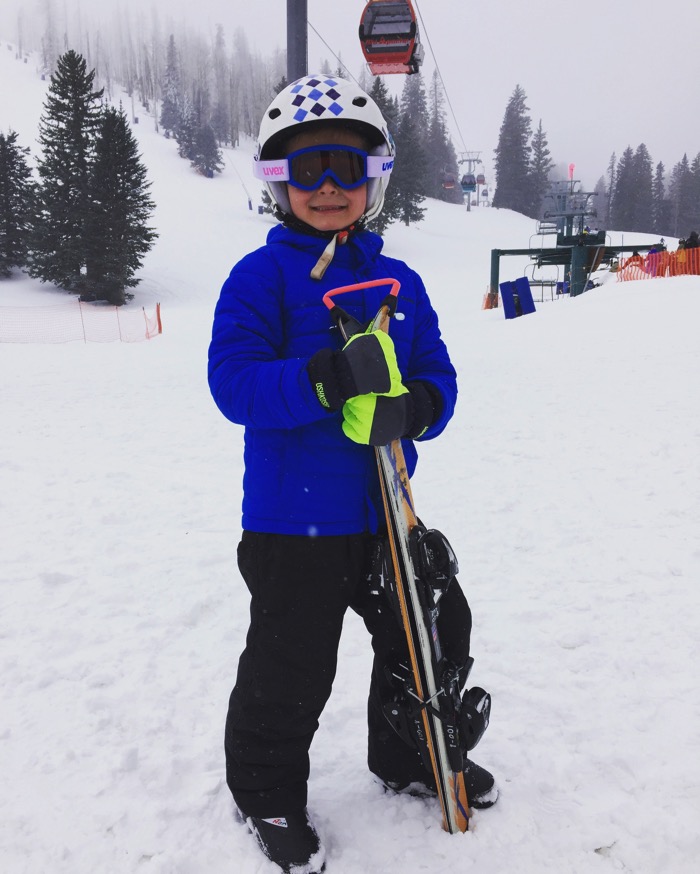 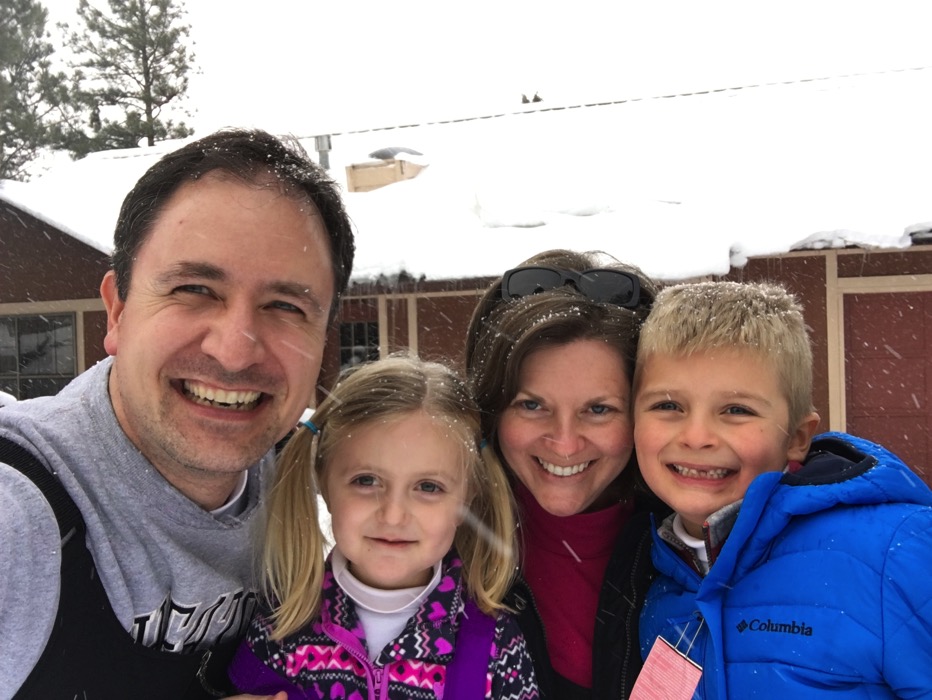 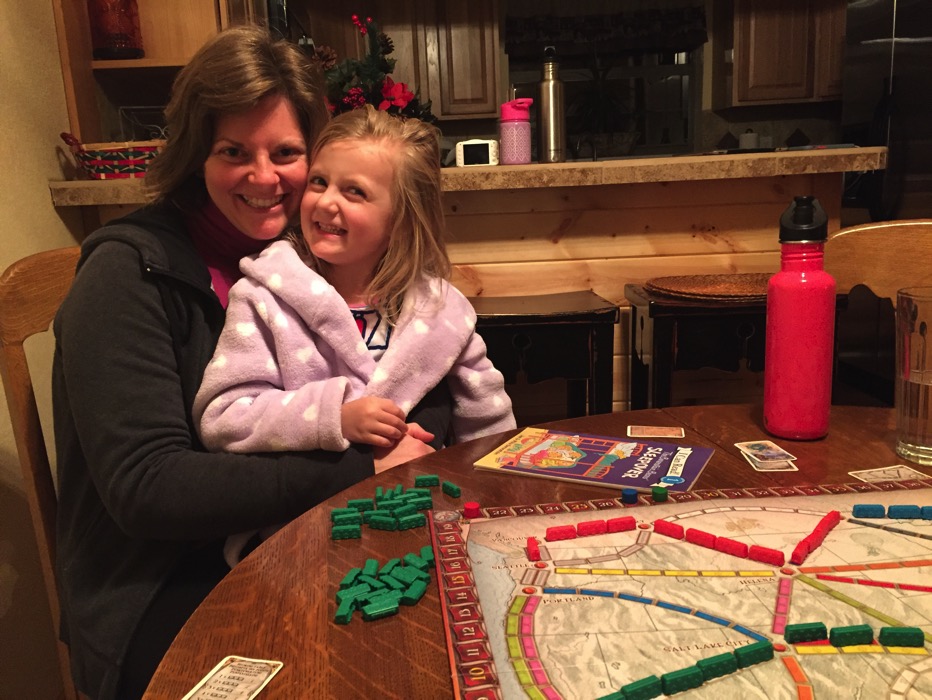 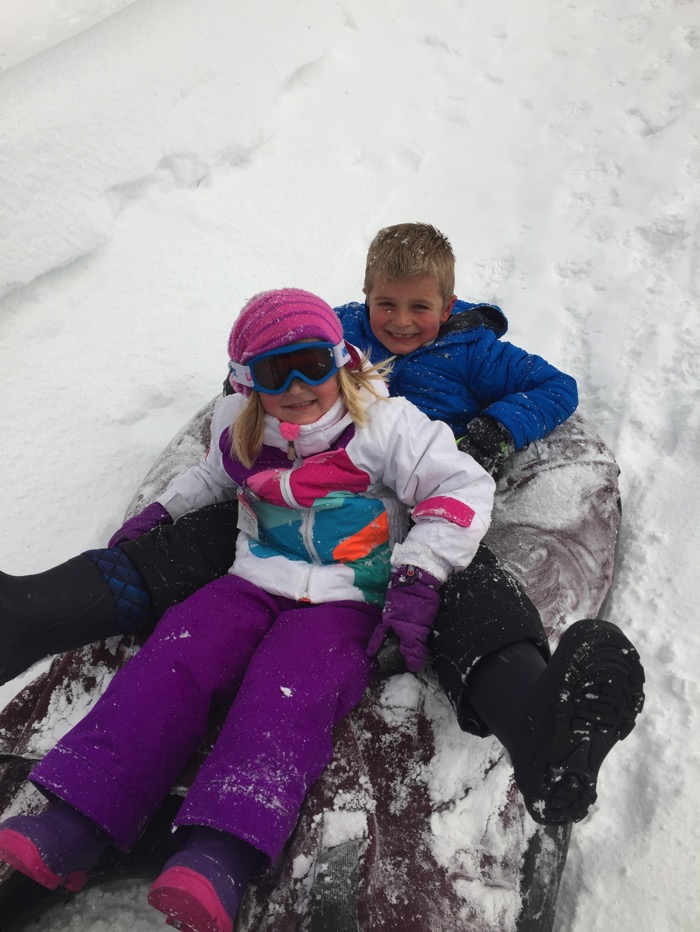 There are at least a handful of English rules I am re-learning through Brennan’s homeschool lessons!  And I know my beloved English teacher, Mrs. Peterson, is probably cringing.  But I completely forgot it is correct to write/say, “Please join Matt and me…” instead of “Please join me and Matt…”  Now I’m correcting myself all of the time.

5.  You’re never too old to have a most embarrassing moment.

Up until this past year, my most embarrassing moment occurred when I was around 12 years old.  It was about a year ago that I had another most embarrassing moment that only few people on planet earth know, and it will remain that way.  It was horrible!  And it happened to occur at Brennan’s school.  The latest one happened when we took a few of Brennan’s buddies out to celebrate his 7th birthday, and he proceeded to tell them something I’d done, which (if true <grin>) is something that I would prefer to remain in the safe space of our own home!  But Brennan thought it was the funniest thing to share, and I tried to navigate not incriminating myself OR LIE to these other children when they kept asking me if it was true.

(We took three of Brennan’s friends to an indoor play area and Chuy’s for dinner to celebrate.) 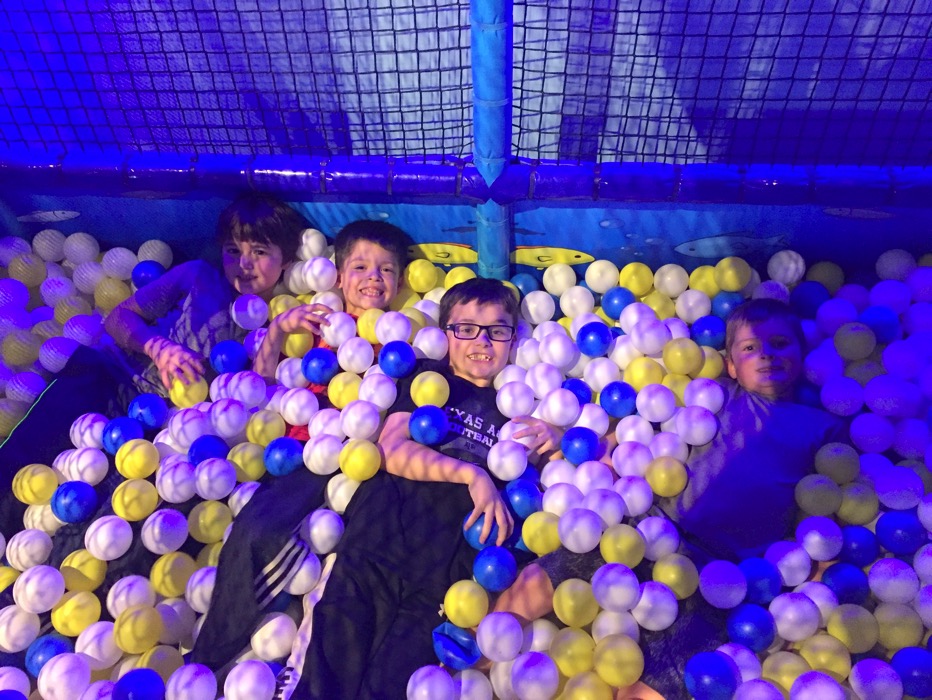 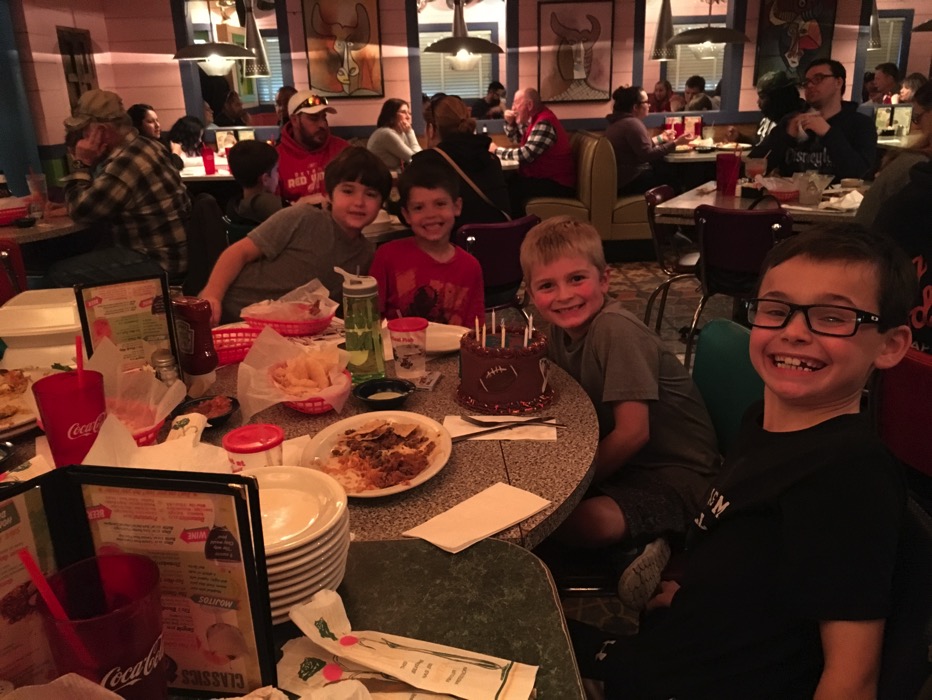 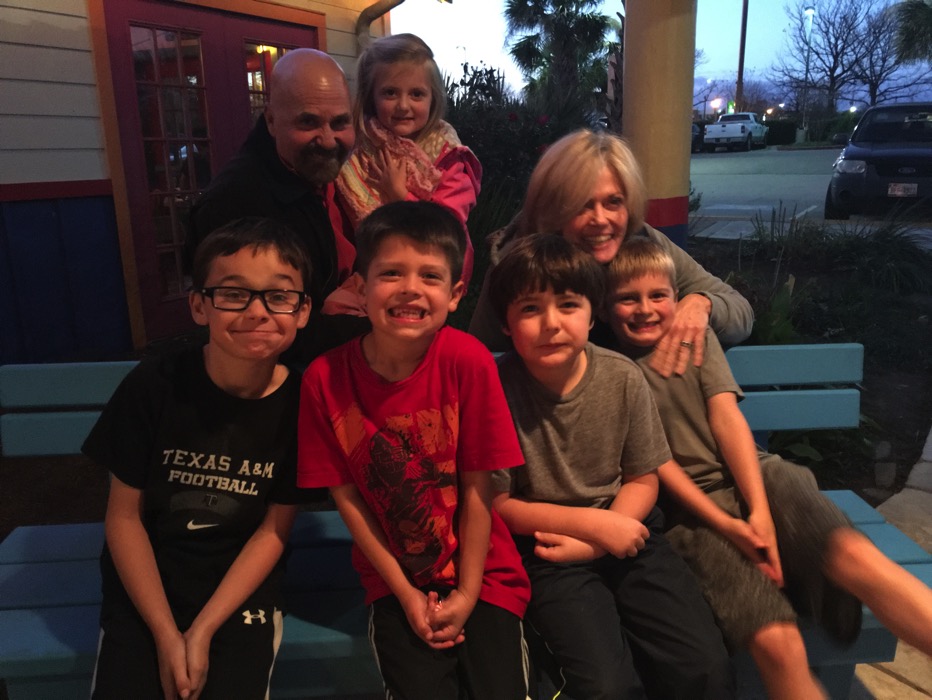 I told my boss that.  Thankfully, I have a very understanding and gracious boss.  And those words aren’t something I would recommend saying willy-nilly in a job setting.  They were words I needed the freedom to say and act upon for myself though.  We were supposed to have an overnight staff retreat which is so much fun and something I don’t like missing.  Well, and it’s not something you probably ought to miss if you can help it.  But, this year, it fell right on Matt’s birthday.  And my dear husband’s birthday has gotten the shaft since 1) Brennan was born since their birthdays are 3 days apart and 2) the past three years I’ve had at least 2-3 church responsibilities and retreats that have taken the time and energy all right around Matt’s birthday.  And I just couldn’t do it again.  I didn’t want to do it again on his birthday.  So I said, “I can’t,” explained why, and it was, not surprisingly, graciously received and understood.

Matt was still off work on his birthday and the kids were in school, so we go to to spend the whole day together!  It included a most wonderful date to the opening of Hopdoddy in our area.

Brennan lost his 3rd tooth in the mountains (his first front tooth). 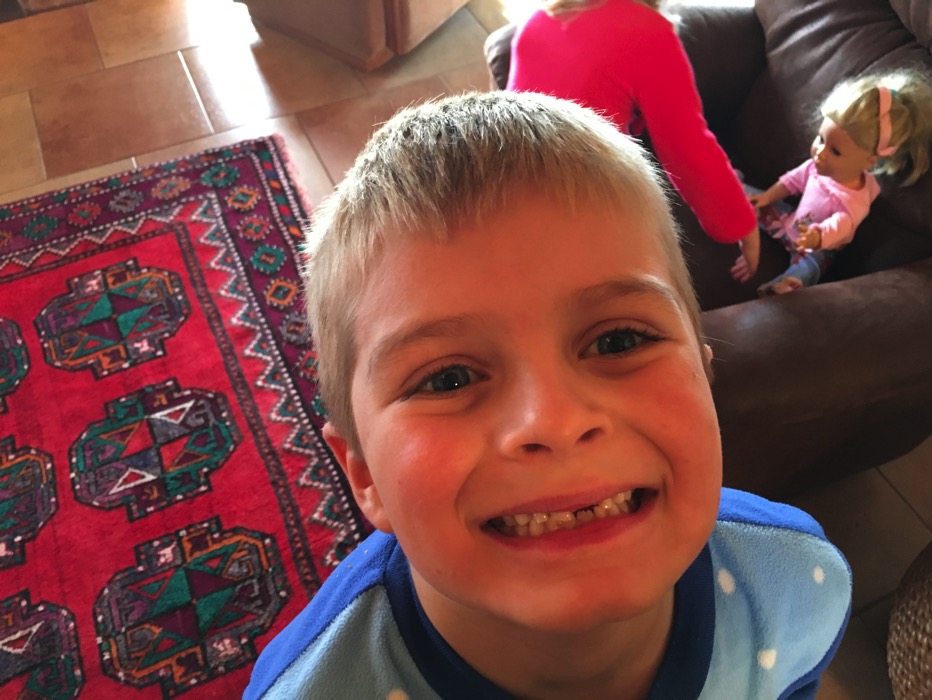 When we got home from the mountains, this dog was literally inseparable from us. 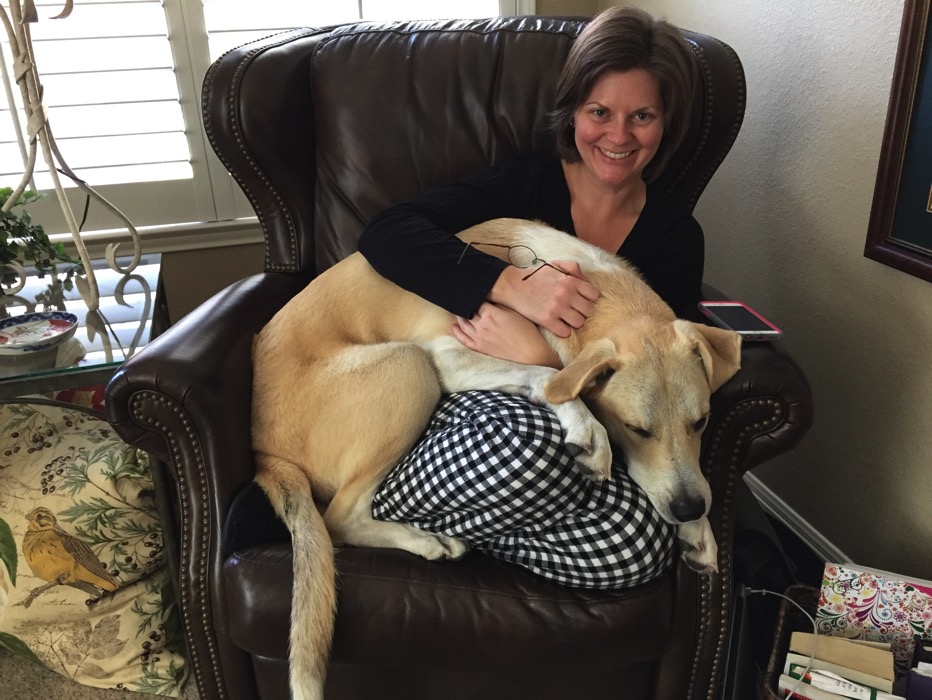 A staff party to ring in the New Year, which was elegant, delicious, and generously given to us by three church families. 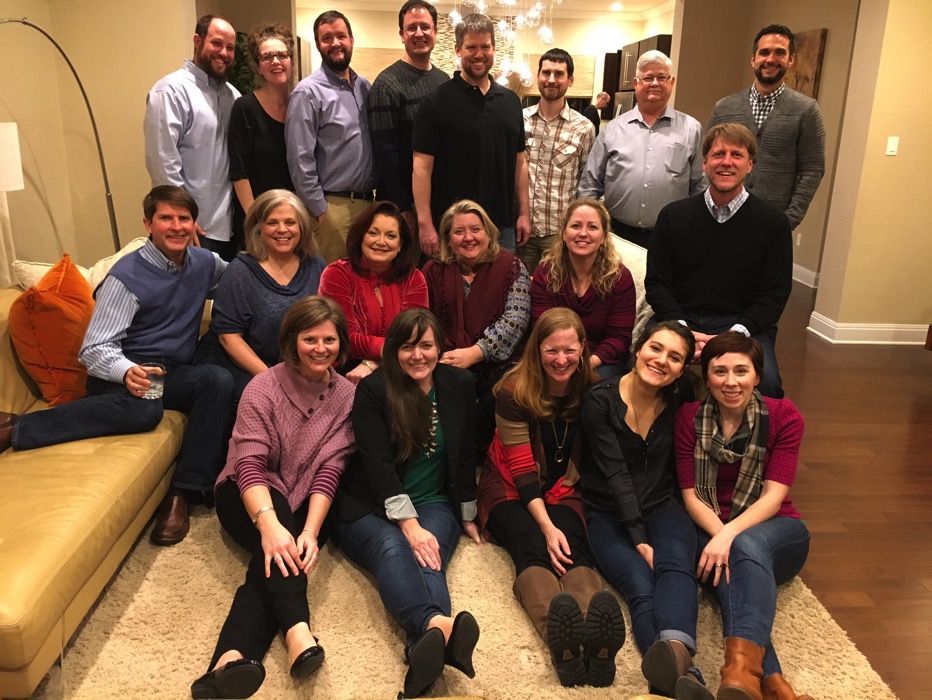 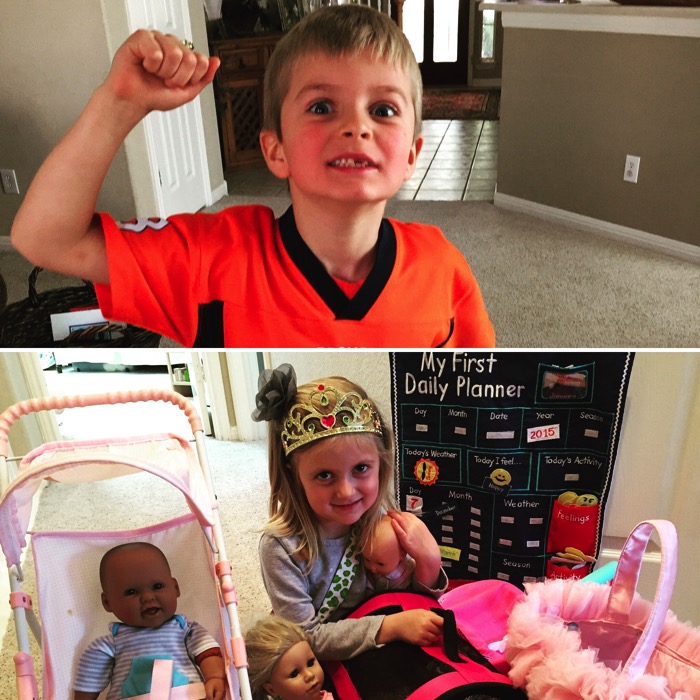 Jen’s birthday dinner!  I am so, so grateful I get to be a part of these celebratory dinners with friends! 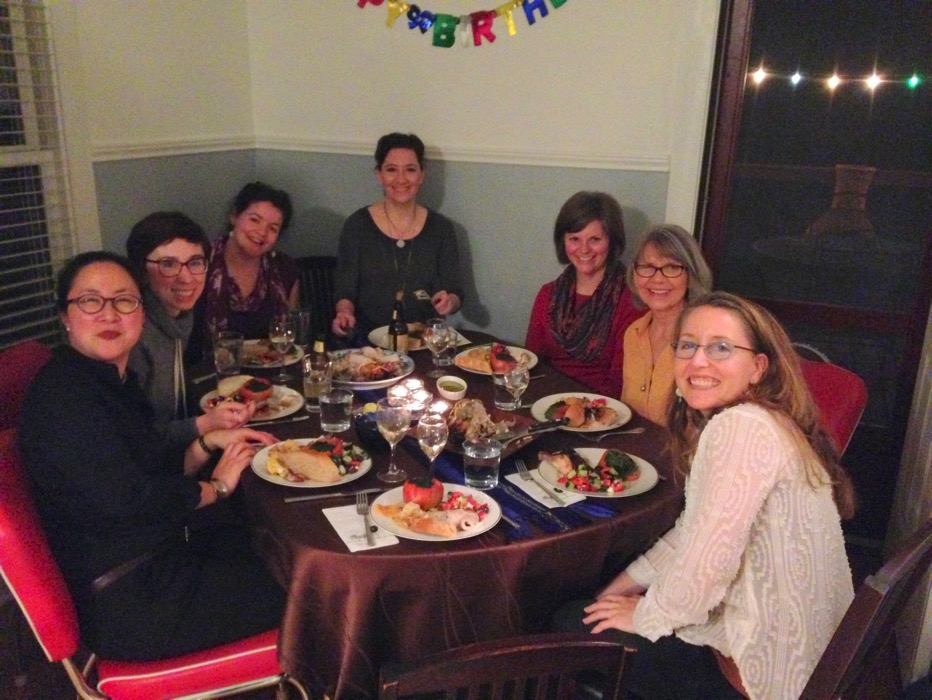 Our annual Mission Team retreat that was kicked off celebrating the Chinese New Year with authentic, amazing Chinese food made by our very own Mindy and Sara! 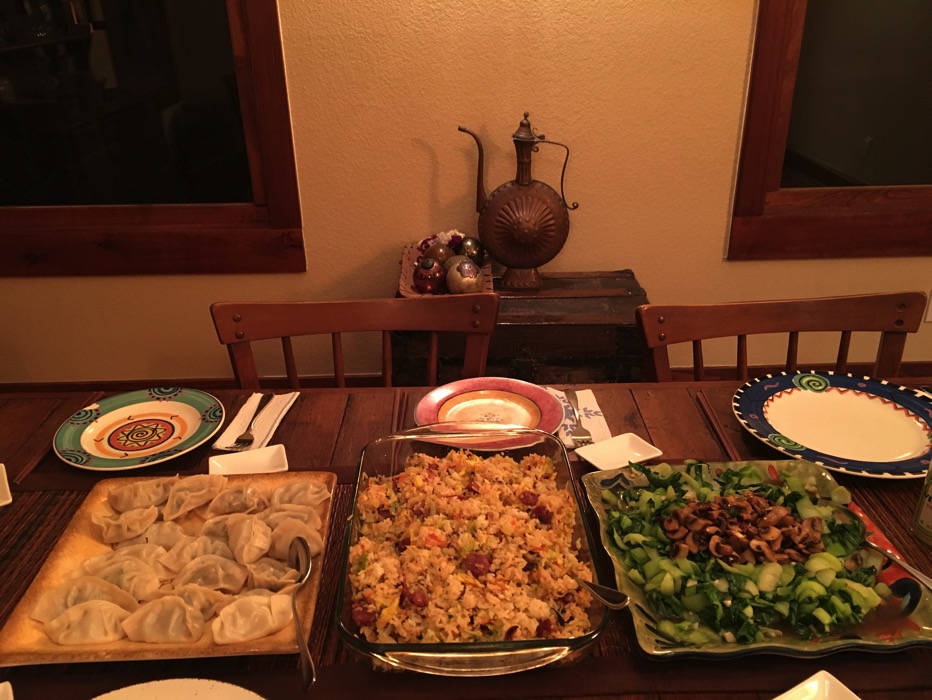 Matt holding down the fort while I was at the retreat.  The dog park is perfect place to go when you can wear shorts in January! 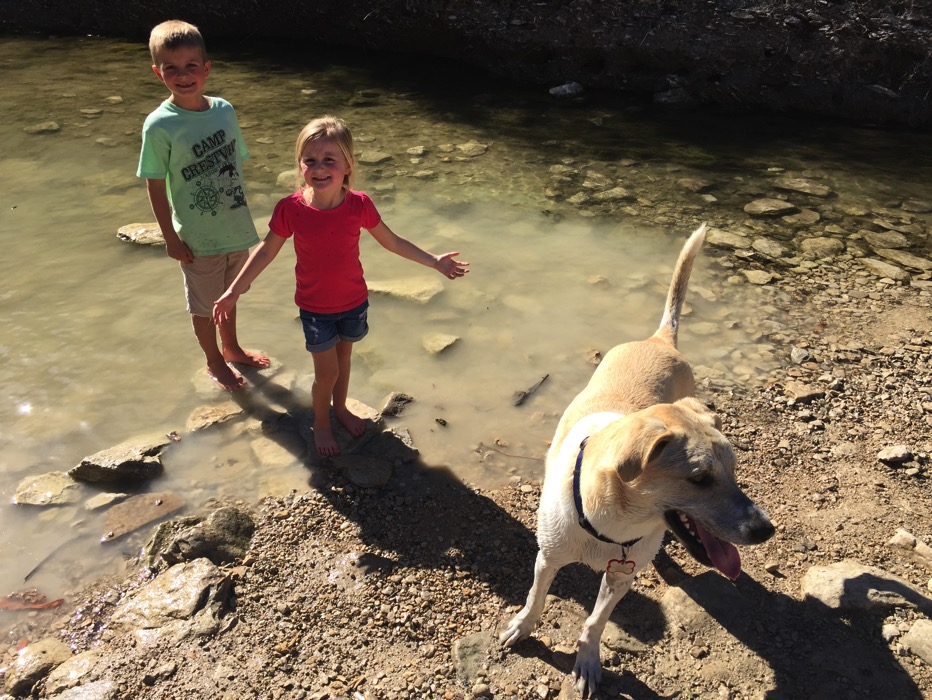 Posted at 03:49 PM in Daily Spice of Life, Family, Foodie, For the Love of Travel, Puppy Mommy | Permalink | Comments (0)